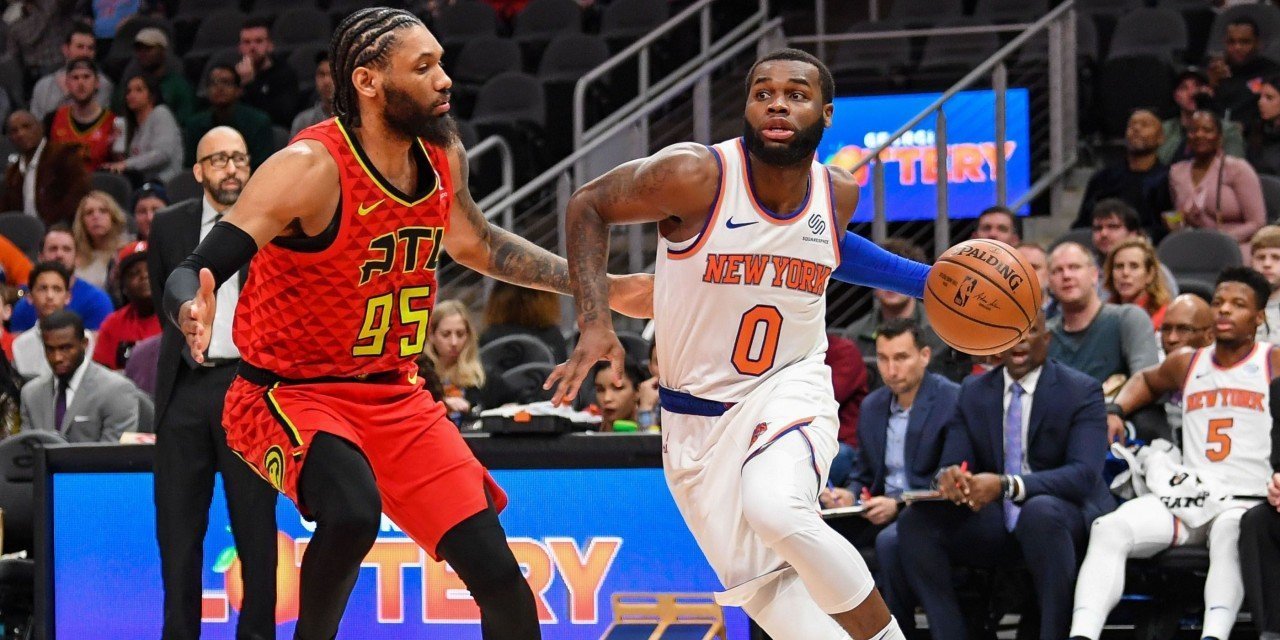 In their second game in as many days, the Knicks put together a solid team performance to snap an 18-game losing streak heading into the All-Star break against the Hawks.

The New York Knicks (11-47) ended their franchise-record losing streak by defeating the Atlanta Hawks, 106-91. The decisive win was a team victory, with plenty of the neophytes utilizing their unique gifts.

The Knicks played their last game before All-Star Weekend against the Hawks (19-39) in Georgia in the second game of a back-to-back.

Dennis Smith Jr. scored the Knicks’ first four points, sparking their 14-0 run to start the game. It seemed like everyone was getting in on it. Luke Kornet hit a three early, G League call-up John Jenkins caught fire, and Kevin Knox seemed to have found a rhythm. The rookie forward shot 2-2 from three in the first quarter and ended the first half with a tied game-high rebound total of eight.

Knox, who will be participating in the Rising Stars Challenge tomorrow, moved well, pushed the ball after coming down with rebounds. The Knicks-Hawks point differential was 15 points by the buzzer at the end of the first. Mitchell Robinson, true to his brand, swatted a last-second attempt by the Hawks and then sent the ball flying across the court. He had two blocks in the first quarter alone.

Unfortunately, the Knicks’ lead didn’t last long. Atlanta shot 11-13 from the free throw line in the first half, while the Knicks practiced poor clock management by settling for quick three-point shots. All of the inside action that occurred in the first quarter was strayed away from in favor of living and dying by the three. Even Jenkins’ hot start couldn’t stop the Knicks from bleeding. This led to a 15-point lead dropping to three by halftime.

Robinson’s defensive prowess and general existence plagued the Hawks on consecutive possessions. With the Knicks’ offense listless, Robinson came up big as a disruptive force, leading them to a renewed 12-point lead. Guards Smith Jr, Allonzo Trier, Kadeem Allen, and Jenkins flowed well on the court, stringing together points. Smith Jr. had a mostly quiet first half, but was efficient throughout the game, shooting 7-of-10. Facing a fragile defense, he drove and scored at will, which at times left a shooter open on the perimeter. DSJ finished the game with 19 points and seven assists.

Number of the Night: 9

Kadeem Allen had 7 assists at the half and ended the game with 9. He has been tremendous as a ball mover and a refreshing player to watch on the Knicks roster. The guard has come up clutch, especially tonight, hitting a three-pointer as the shot clock expired midway through the fourth quarter. Allen ended the night scoring 14 points on 5-9 shooting.

No one could have asked for more than ending the Knicks’ single-season franchise-record losing streak before entering the All-Star break. Pessimistically, the W can be seen as a cheap win, but considering that it’s only their 11th of the season, fans and players alike will take any win they can get.

Dennis Smith Jr. gets his first win as a Knick.

“It was a long time coming.”