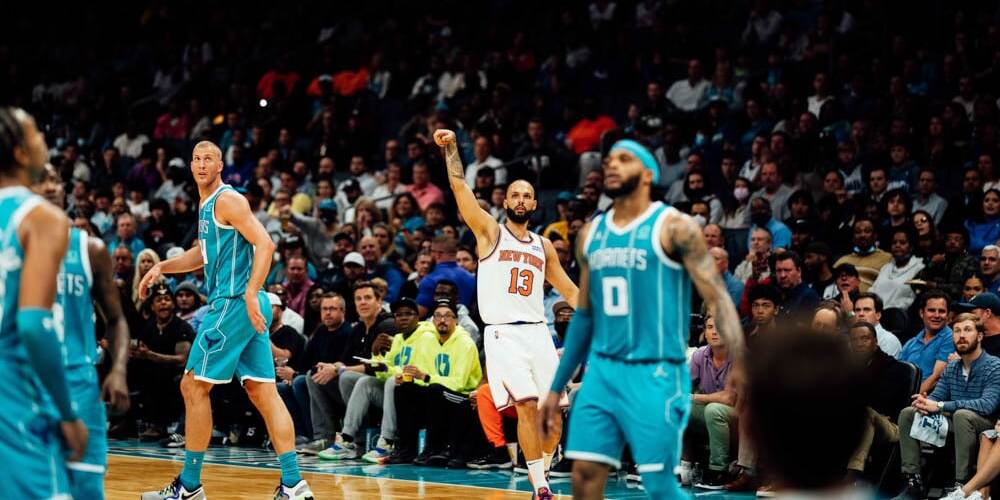 Behind a 30-point performance from RJ Barrett, the Knicks took down the Hornets to snap their brief losing streak.

On Wednesday, the New York Knicks (31-42) snapped their two-game losing streak with a win over the Charlotte Hornets (37-36), 121-106. RJ Barrett led New York in scoring with 30 points while Obi Toppin added 18 and Alec Burks 17. Seven Knicks ended up reaching double digits in scoring.

Conversely, for the Hornets, LaMelo Ball led all scorers with 32 points and Terry Rozier finished second on the team in points, tallying 18. But the Hornets didn’t receive much production from their reserves—nobody on the Charlotte bench dropped more than seven.

Hot three-point shooting for New York carried the team to victory. The ‘Bockers managed to knock down 20 treys on 45 attempts as a team, a mark good for 44.4%. Evan Fournier set the Knicks’ single-season record for three-pointers in a season after hitting four on 10 attempts. He contributed 12 points and seven assists in the victory.

Below are two takeaways from tonight’s win.

Jericho Sims quietly balled out in the starting lineup

With Nerlens Noel, Mitchell Robinson, and Julius Randle all out with injuries for the Knicks tonight,  Tom Thibodeau handed rookie Jericho Sims the starting center spot. It was the first start of Sims’ career. While he didn’t post an insane stat sheet, he did capitalize on the opportunity as much as Knicks fans could have hoped for and made a great case for additional minutes moving forward.

Offensively, Sims dominated this game as a roll man, particularly in the early going. His intuitive cutting allowed him to score three dunks in the first quarter alone, ending the period 3-for-3 from the field. In his first 11 minutes of play, Sims scored the most points he has in a game all month.

Along with feasting inside for easy buckets, Sims also did many little things that tend to go unnoticed but impact winning nonetheless. He set strong screens that got his teammates open, boxed out and sealed opposing bigs, and made timely rotations to defend the rim. His effort level, as always, was fantastic, and it’s far from hyperbole to say he has the highest motor on this Knicks roster. Considering how awry this season has gone for New York and the lack of effort this team has exhibited at times, it’s refreshing to see someone play so hard like Sims did tonight.

Like Fournier, Burks has drawn his fair share of ire among Knicks fans this season, and rightfully so. After an excellent 2020–21 campaign coming off the bench for the ‘Bockers, Burks is shooting just 38% from the field this year, far and away a career-low. Furthermore, he hasn’t quite fit as the starting point guard as he lacks the vision and handles to be more than an average playmaker. But however disappointing Burks has been overall, there’s no denying he has played well lately. Burks responded with another impressive scoring display following a 21-point performance against the Hawks on Tuesday.

First and foremost, Burks had it going from beyond the arc, as did the entire team. He converted on three of his six attempts from beyond the arc, making him 5-for-12 on threes over his last two. Burks’ recent stretch shooting the ball highlights the notion that he remains one of New York’s best three-point threats, for better or worse.

Burks didn’t simply make his threes—he contributed in an all-around manner with six rebounds, three assists, and a pair of steals. Burks doesn’t seem to have a future in The Big Apple, but ‘Bockers faithful should be rooting for him to continue to finish the season off on a high note. It could do wonders for his trade value and maybe get the Knicks back some value if he does.

The Knicks will travel to Miami to play the top-seeded Heat on Friday.

»READ: An Expanded Role for Obi Toppin Would Benefit All