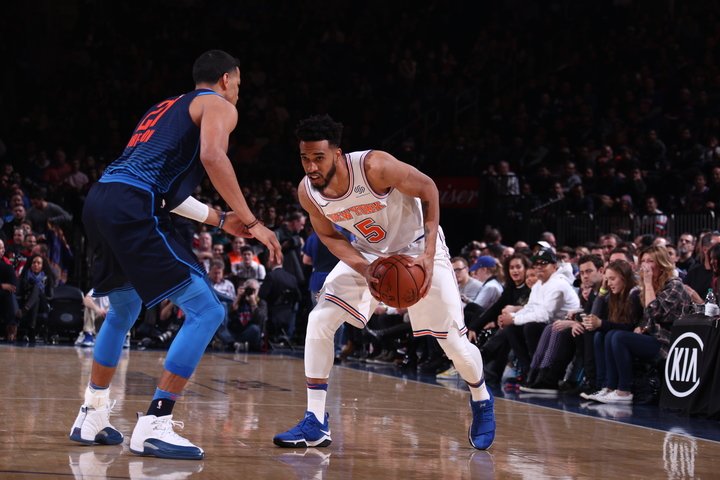 On the shoulders of Michael Beasley and company, the Knicks won their 16th game of the season.

The shorthanded New York Knicks (16-13), who were without Kristaps Porzingis, turned in a convincing win against the Oklahoma City Thunder (14-15), spoiling Carmelo Anthony’s return to Madison Square Garden. Despite missing their Latvian superstar, and with Frank Ntilikina having an off night, the Knicks got a massive contribution from Michael Beasley, who erupted for 30 points and knocked off their much-hyped opponents.

Let’s recap the Knicks’ 16th win of the season.

With Kristaps Porzingis out with a sore left knee, Melo’s much-ballyhooed return to Madison Square Garden lost a little intrigue, but the Knicks came to play even without New York’s beloved unicorn. They needed contributions from the rest of the roster to fill the 25.5 points per game Porzingis has pumped out this season.

KP is expected to return soon, as he was given a chance to test out the knee during shootaround to see if he would play on it or not. There’s still no official timetable for it yet, though. “We did shootaround,” Knicks coach Jeff Hornacek told the NY Post before the game. “He’s talking with the doctors so we’re not quite sure yet.” The Knicks will be back in action on Monday against Charlotte, so consider Porzingis questionable for that one.

The Knicks got exactly what they needed from their ensemble. While OKC’s trio struggled once again (Russell Westbrook, Paul George, and Carmelo Anthony combined to shoot 20-of-50), the Knicks got solid contributions from just about everyone, including a shocking pop-off cameo from Michael Beasley (30 points, 5 rebounds, 4 assists, 2 blocks, 11-of-18 from the floor, 2-2 from three, 6-7 from the line).

Aside from your random, annual Beasley explosion, the Knicks were able to keep their offense afloat with a hodgepodge pupu platter of playmaking from Jarrett Jack (12 points, 8 rebounds, 7 assists, 3 steals, 3-5 FG, 1-2 3PT, 5-6 FT), sharpshooting from Doug E. McBuckets (13 points, 5-9 FG, 3-5 3PT), and Courtney Lee stuff from Courtney Lee (20 points, 5 rebounds, 2 steals, 5-12 FG/ 3-6 3PT, 7-7 FT). It’s hard to really express how important Jack’s veteran leadership has been to the Knicks since his stats aren’t exactly eye-catching, but this clip sums it up pretty well. Jack is maybe the Knicks’ only guard that can make this play out of a pick-and-roll trap:

Jack chucks a bullet cross-court pass to #Knicks captain Lance Thomas, who drills the three from the corner to get NY on the board in the 3rd

Prized rookie Frank Ntilikina never got a chance to put up a statement game in Porzingis’ absence, as some thought he might. He got in foul trouble early –  a common theme for young guards trying to contain Russell Westbrook with a full head of steam – and fell out of rhythm right off the bat.

Frankie played just 13 minutes and finished with 0 points on 0-for-2 shooting. As he grows into his role as New York’s point guard of the future, he’ll have to learn how to stay mentally sharp even when the game doesn’t start the way he wants.

Porzingis was in street clothes, but tonight was all about Carmelo Anthony.

For the first time since he was traded to the Oklahoma City Thunder this summer, ‘Melo was back in the Garden. It was bound to be an emotional return, especially considering the ruinous front office his New York career was stained with. While his first few years with the Knicks, when the ‘Melo/Tyson Chandler core was at its peak, were filled with hope his last few years, marred by Phil Jackson and James Dolan’s incompetency, were anything but. Fans began to feel sorry for ‘Melo, and even openly wished the team would trade him so that:

a.) The Knicks could build around Porzingis.

b.) ‘Melo could finally play for a real contender.

The Thunder were supposed to provide Anthony with that opportunity. Before the season, Paul George told media that “this team feels like a contender,” but they’ve had a way harder time getting out the gates than anyone expected. At just 14-14 after an epic triple-OT win over the 76ers last night, the Thunder came in hungry to build momentum against the Knicks and get ‘Melo his comeback win.

Things didn’t go as planned. ‘Melo was cheered during intros but booed as soon as the game tipped off. That’s kind of how the game went. After a scorching hot first quarter, ‘Melo finished with just 12 points on 5-for-18 shooting, and the Porzing-less Knicks came away with the upset win.

The Knicks are 16-13 after tonight’s upset win sans KP, a full two games up on the Westbrook-PG-’Melo-led OKC. If you saw that coming before the season, you’re either a crazy person or you’re a liar.