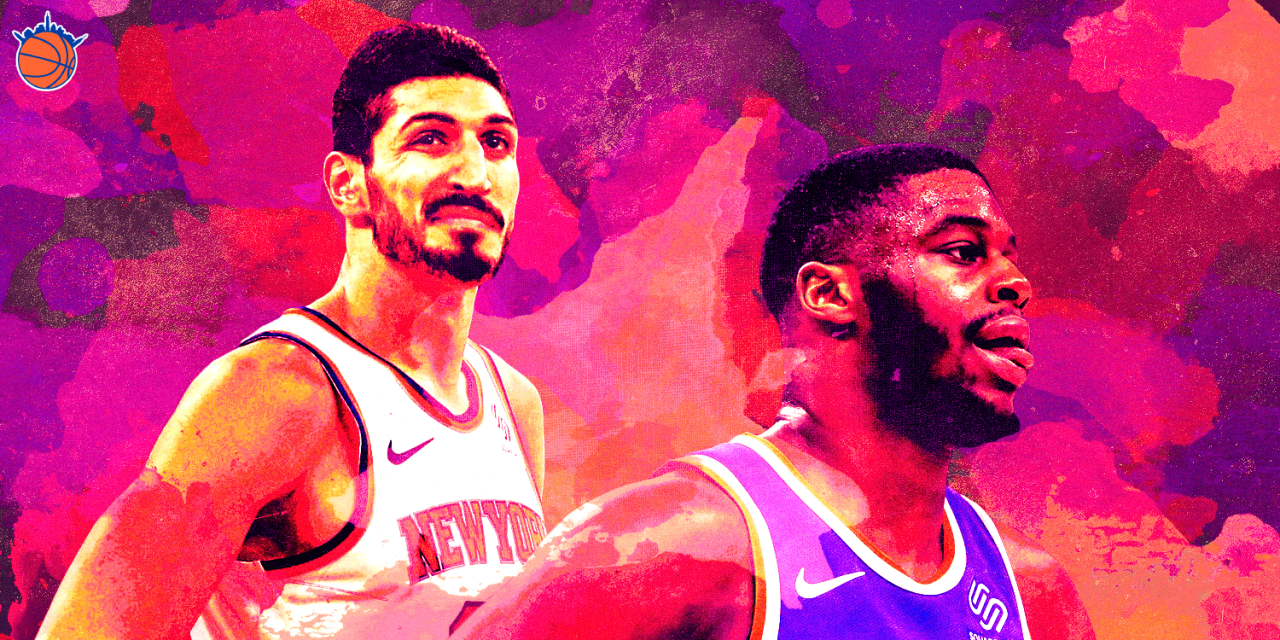 The Knicks are in the midst of their worst losing streak in franchise history. Despite the losing, is there anything positive transmitting from Fizdale’s developing defense?

Have you stopped reeling yet? Is the feeling of pure dread and disappointment starting to die down?

We should all be at the stage of acceptance by now after the confounding week. With the King of New York throne now vacant, it’s time to once again turn our attention to the real issue that has plagued us in recent years.

As with most struggling teams, the squad has been unable to execute and display a defense to be proud of. It’s the area in which we’ve seen the least progress. The blame for that is two-fold; for one, it’s hard to institute a system of any kind when the retention rate for the roster is embarrassingly low. Second, the Knicks have spent much of their time as a team trying to keep up with teams offensively. More often than not, defense is hampered by individual efforts and the absence of an intent to communicate a defensive system.

This year, while inconsistencies are still the predominant narrative, the young squad has shown promising efforts on defense. We’ve seen how sophomore Damyean Dotson isn’t afraid to play tightly on the perimeter. Despite a slow start on the defensive end, resurrected lottery pick Emmanuel Mudiay has had moments where he stayed in front of his man and forced a turnover. As a viewer, it’s easy to focus on the old pattern of “the Knicks don’t play D!” Numbers tend to give a more nuanced version of what’s working and what’s not.

On the season, the squad allows 52.4 points in the paint per game. In the case of Mudiay and now-maligned center Enes Kanter, their insertion in certain lineups isn’t always as laughable as what meets the eye.

Per NBA Stats, Kanter and Mudiay on the floor together allow opponents 42.7 points per game. With Kanter sitting seven games in January, the team’s Defensive Rating ended at 113. That’s right in the “at least we’re not that bad” territory. It’s easy to scold Kanter as a defender, but he does try. The team certainly looked different on the inside without him.

Consider another lineup where Mudiay plays a bulk of his minutes. The two-man backcourt of Mudiay and Tim Hardaway Jr. over 34 games together, gave up 55 points per game on 48.3 percent overall shooting.

Collectively, the Knicks haven’t turned a corner, defensively speaking. It’s tough to single anyone out as the culprit.

Aside from Mudiay’s irregular, unpredictable value on defense, Kanter is also an interesting conundrum. He’s an automatic double-double when he plays. But defensively? You’re hard pressed to find a player who’s scared of the paint with him on the floor. What makes Kanter appealing, in spite of the ongoing feud between him and the franchise, is he possesses a skill that goes wildly under-valued.

Without him, the Knicks are bottom-dwellers in the rebounding category. Before being benched by David Fizdale, Kanter was in the 94th percentile for offensive boards, per Cleaning the Glass.

Check out the nice one he had as a trailer versus Golden State. Though he’s sitting right outside the top 10 of league centers for rebounds per game this season, Kanter still has one of the higher per game numbers for offensive boards. This stat is brought up at this point in the season because a) he likely won’t be around for much longer and b) boxing out is a major issue with this year’s team defense.

As a kid, before you learned anything about shooting or ball-handling or passing, boxing out was a practice mandate. The young Knicks have forgotten that elementary skill.

Fortunately, the hopeful defensive star Mitchell Robinson is ripe for grasping the box out. It’s actually imperative to the Knicks’ rebuilding plan that Robinson soaks up Kanter’s ability as a force on the boards. Additionally, for the time being, Robinson has DeAndre Jordan as another active example of how critical it is to box out on every possession.

Robinson is conspicuously raw. We knew this. He knows this. We applaud his emphatic blocks. With all his verticality and leaping ability, Robinson leaves a lot to be desired in terms of crashing the boards. To be fair, this is partially attributed to the personnel he’s on the floor with. The more obvious reason Robinson lacks presence on the boards is because he just doesn’t play enough minutes. But you have to call a spade right now. Robinson simply puts more effort into going for the highlight block than trying to out-muscle guys for the boards.

With so much in the air as the trade deadline quickly approaches, what can the Knicks do to improve defensively?

Firstly, Fizdale has to commit to a scheme and implement it. One of the key factors in a franchise’s success is that the head coach has a clear scheme that accentuates players’ strength while flipping their weaknesses into works-in-progress.

For the Warriors, it’s constant player movement and getting easy buckets off cuts. For the Nets, it’s getting to the cup and pull-up jumpers inside the arc. Take a second to answer the question: what do the Knicks do really well this season?

Fizdale told Mike Vorkunov of The Athletic, “But I do know that when we move the ball, it has its moments of looking really good. And when we hold it, we look like a terrible basketball team.”

The team still has no identity on offense or defense. For a guy who was touted as a player’s coach, Fizdale has been relatively weak at putting guys in positions to get better at the little things defensively.

For the Knicks’ defense to move the needle in the season’s second half, Fizdale should keep things easy. These guys are mostly under 25 years old. It’s going to take some time to break out of the bad habits they built up. The only way for them to start working on their individual weaknesses is for Fizdale has to decide what he wants this defense to look like. Then communicate that ritually.

Keeping with the theme of establishing a defensive philosophy, the second suggestion marries off-court and on-court culture. It’s important for Mitchell Robinson to create some sort of mentor-mentee relationship with another dominant big.

Earlier in the season, Tim Hardaway Jr. commented about how Lance Thomas is always in his ear about hustle and effort. I tweeted how awesome it would be for Robinson to get some time in with Charles Oakley. But that’ll never happen—at least not on MSG properties. The Knicks lack that big brother for Robinson. With DeAndre Jordan not likely to be here next season, Fizdale should take advantage of the whatever time Jordan is here to impart some defensive nuggets on Robinson.

I would love to see Mitch getting time with Oak. But thanks to you know who, only way that'll happen is during summers

Before being traded last week, Jordan had a Defensive Rating of 104 with a True Shooting percentage of 67 percent. Robinson has all the indicators that he can follow in the path of Jordan as a two-way menace inside. He’ll probably be better. Per Cleaning the Glass, Robinson is currently shooting at a 68 percent clip, which places him in the 97th percentile for all centers. As well as he’s able to be in position to get those blocks, Jordan can teach Mitch the right way to harness that length into better timing, sliding over to help (without committing a foul), and using his verticality as a weapon when his core strength fails for now.

The new year and pre–All-Star break stretch is notoriously rough for the Knicks, regardless of who’s donning the uniform. It’s hard to predict how the Knicks will look with the two new additions. More players may be on the move as the trade deadline looms.

That shouldn’t be the focus, though. After the All-Star break, the squad should have both Mudiay and Frank Ntilikina back. The departures Trey Burke and Tim Hardaway Jr. should definitely get Ntilikina the minutes we’ve been pleading for since November.

With the fresh start, Fizdale must become the architect he was hired to be and start showing some progress in the young core’s defense. The identity of the second half’s defensive scheme could be a huge factor in which coveted free agents sign on the dotted line.