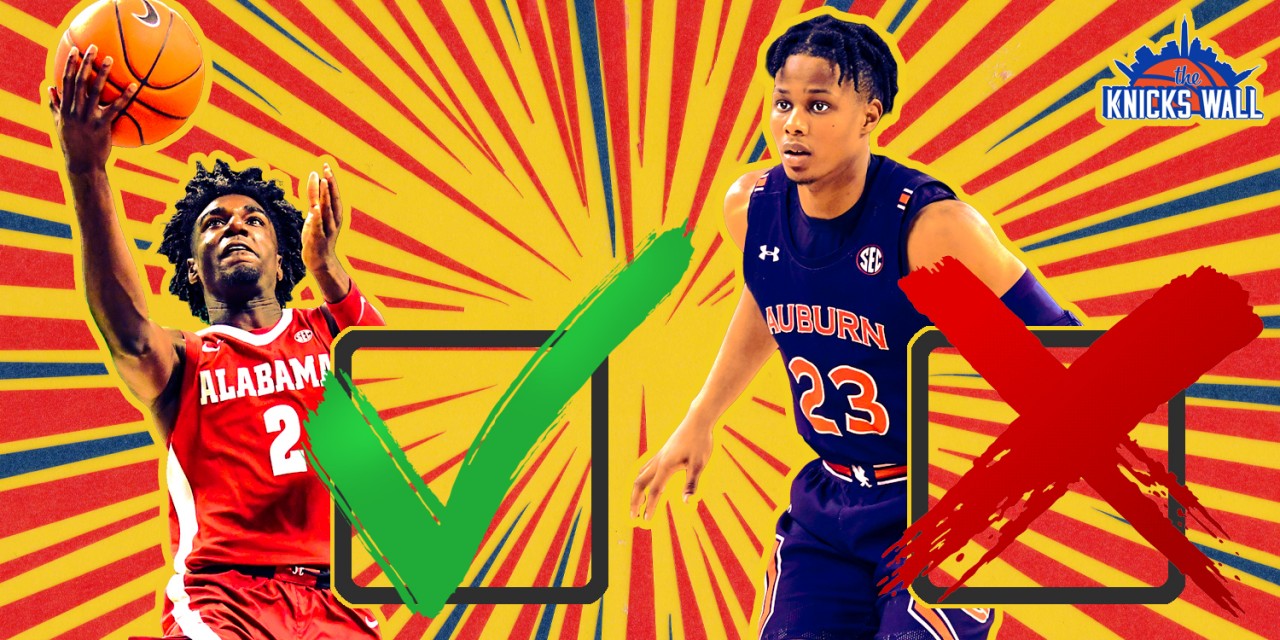 At a turbulent time in the NBA this week, the 2020 draft tonight for the Knicks represents a clue into the offseason and rebuilding process. Here are the dos and don’ts for the two-round frenzy.

Editor’s note: This article was published prior to New York’s trade on draft day, which sent pick nos. 27 and 38 to the Utah Jazz for no. 23.

After almost a five-month delay, multiple coaching and front office hires, and hundreds of potential scenarios thrown out there, the 2020 NBA Draft is finally here. Tonight at 7:30 p.m. ET, the Knicks will begin their first draft under new head coach Tom Thibodeau and new President of Basketball Operations Leon Rose. With the organization having three draft picks (nos. 8, 27, and 38) this is one of the most important drafts the Knicks have had in some time.

You have to go all the way back to 2003 to find the last time the Knicks had three picks within the top 40. In that draft, they selected, Mike Sweetney at no. 9, Maciej Lampe at no. 30 and Slavko Vranes at no. 39. Sweetney only ended up having a four-year NBA career and was traded for Eddie Curry and Antonio Davis prior to his third season. Lampe was traded to the Suns to acquire Stephon Marbury and Penny Hardaway. Slavko Vranes was waived before playing a game for the Knicks.

It’s crucial that a draft as bad as this doesn’t have once again in 2020. With the young core that the Knicks have been slowly building over the past few years, these three picks can play a major role in determining the future trajectory of the team. If the Knicks can add a quality starter as well as two solid role players, then the future will look a lot brighter.

In order to make that happen, the Knicks need to follow a set of rules. Here are Do’s and Don’t’s for the Knicks in tonight’s NBA Draft.

DO: Take one of Killian Hayes, Tyrese Haliburton, Kira Lewis, or Devin Vassell at No. 8

While I don’t have an official order of preference in players the Knicks should take, I do have a group of players that would all be good picks. Those players include French guard Killian Hayes, Iowa State guard Tyrese Haliburton, Alabama guard Kira Lewis Jr. and Florida State shooting guard/small forward Devin Vassell.

The Knicks are in dire need of two things: guards and three-point shooting. Each of these players solves at least one of those problems.

Killian Hayes is an appealing option due to his speed and passing ability. The 6’5” guard averaged 11.6 points per game and 5.4 assists per game for ratiopharm Ulm in Germany this past year. He also shot an encouraging 48.2% from the field. While Hayes only shot 29.4% from three-point range on 3.1 attempts per game, he did shoot 87.6% from the free throw line, which is a pretty good indicator that his shot from downtown can develop and improve over time. His form is also extremely normal, so it’s not like Hayes will need to overhaul his shot to get these to start dropping.

Additionally, Hayes had stretches for ratiopharm Ulm where his three-pointer was reliable. Despite shooting just 21.8% from three on 2.8 attempts per game in 20 German League games, Hayes shot 39.0% from deep on 4.1 attempts per game in 10 EuroCup games. Fans may cringe at the inconsistency in Hayes’s three-point shot, but as a 19-year-old, it’s impressive to be averaging over 11 points per game and over five assists per game in a professional league.

Just remember, Luka Doncic only shot the three in the low 30’s and high 20’s in terms of percentage in his time overseas before heading to the NBA. Hayes isn’t anything remotely close to Doncic, but you could expect his shot to develop once he’s in the NBA. Additionally, Hayes is good enough in other areas that will make him a positive, even if he’s not shooting well to start his career. Hayes’s game reminds me of Goran Dragic’s.

In terms of Tyrese Haliburton, the 6’7’ guard averaged 15.2 points per game, 6.5 assists per game, 5.9 rebounds, and 2.4 steals per game in his sophomore season at Iowa State. He also shot 50.4% from the field and 41.9% from three on 5.6 attempts per game. Haliburton’s game is quirky. Also, he needs to get to the rim more often and has to create for himself a bit more. That being said, his efficiency, shooting, and passing all show that he can be a solid guard in the NBA.

Kira Lewis Jr. has been a late-riser in the draft process and a guy that many may wonder why he fell to where he did in the draft a few months from now. The highest he will go is likely no. 8 to the Knicks, but he’s worth it that high. Lewis’s speed and scoring ability is what separates him from others in the NBA draft. As a sophomore at Alabama, he averaged 18.5 points per game, 5.2 assists per game, and 4.8 rebounds per game. He also shot 45.9% from the field and 36.6% from three on 4.9 attempts.

A major concern about Lewis is that he played last season at 6’3,” 165 pounds, but he apparently is up to 180 pounds. Furthermore, he only shot 47% at the rim last season. However, Lewis would undoubtedly be one of the most exciting players the Knicks have had in quite sometime due to his speed and athleticism.

Devin Vassell is a wing, not a guard, but is the perfect 3-and-D prospect. Vassell might be the best shooter in the NBA draft, as he shot 41.5% from long range on 3.5 attempts per game at Florida State this past season. He’s 6’7” with length and athleticism which makes him nightmare on the defense end as well. Int terms of shooting, defense, and upside, he’s exactly what the Knicks are looking for. ESPN’s Mike Schmitz compared Vassell to a “mini Mikal Bridges,” which is pretty accurate. His play style is also similar to that of Khris Middleton.

"Like Bridges, Vassell is outstanding at hounding point guards thanks to his quick feet and length, likely filling a similar 3-and-D style role." pic.twitter.com/r2qKbr0Xxf

If any of these four players are the pick, then Knicks fans should be happy. If Dayton forward Obi Toppin somehow falls to the eighth pick, which I don’t think he will, expect him to be heavily in play as well.

There has been a lot of noise about the Knicks potentially taking Auburn wing Isaac Okoro with the eighth pick. This is something that I ultimately think would be a disaster. Okoro is not only a player that shouldn’t be taken above any of the top four options for the Knicks mentioned earlier, but a player that wouldn’t fit in well with the current makeup of the team.

Okoro is a player who’s athletic and can defend extremely well. The main problem is that he can’t shoot. Okoro shot 28.6% from three-point range on 2.5 attempts per game in his freshman season for Auburn. His free throw percentage of 67.2% also doesn’t project well towards his long-term shooting ability. This is not a player that you can put next to R.J. Barrett, a guy who struggled shooting the basketball himself in his rookie year. In addition, the Knicks barely have any shooters on the team in general. Ignoring shooting with the eighth pick would be an abject disaster.

If Okoro ends up in Chicago or Atlanta, a place where he can sit back and develop for a few years, that would make a lot more sense. However, with the current roster that New York has, that just won’t be the case. He’ll be thrust into the lineup early and often and as a result, he’ll add more non-shooting to a team with no shooters.

Another player that would fit into this category is Patrick Williams. While Williams shot better than Okoro in his freshman year at Florida State (32% on 1.7 attempts per game) and potentially projects as a better shooter with his 83.8% free throw percentage, he’s going to take years to develop. Williams came off the bench for Florida State, only averaging 9.0 points per game and 4.0 rebounds per game. Like Okoro, he’s an athlete who can defend well, but the Knicks should be focused more on guards and three-point shooters, not unpolished wing defenders.

DO: Consider trading down at the NBA Draft if all four of the options are still on the board at 8

As mentioned before, all four of these players are good options. If the Knicks don’t have a major preference between any of them, they should look to trade down a few picks and acquire another player or pick as a result. As a rebuilding team, there’s nothing wrong with always looking to acquire more assets.

DON’T: Make an Impulse Trade as a Reaction to Nets Rumors

With NBA trade season opening on Monday at noon, trade rumors are flying all over the place. Two of the major rumors out there have been about James Harden wanting to be traded to the Brooklyn Nets, and a Russell Westbrook trade being in play for the Knicks. With 32-year-old Westbrook about to make $41 million in 2020–21, $44 million in 2021–22, and $47 million in 2022–23, it might not be in the Knicks’ best interest to make this deal.

Westbrook is likely still a top-20 player in the NBA, but only shot 25.8% from three-point range last season, his worst since his second season in the league. Is this the star player that the Knicks should be trying to add to a team with no shooting? Probably not. As a player who relies a ton on his athleticism, Westbrook’s decline could be on the way within the next couple of seasons. Even if the Knicks could get Westbrook for cheap (they probably can), it’s worth it to use this cap space elsewhere in the future. Multiple star players request trades every season; you never know who will be available.

One reason that I think the Knicks may make this deal is because of what’s happening in Brooklyn. The Knicks organization isn’t going to want to be a non-competitive team while the Nets are championship contenders. However, the Knicks shouldn’t be worried about what the Nets are doing. This goes for the Westbrook trade, and it goes for any other trade that they may have to potentially overpay for. Continue to stick to the rebuild, even if it takes another few years. The backbone of most competitive NBA teams come from the NBA Draft, and as long as the Knicks can hit on a few picks, the same will be true for them.

DO: Use picks 27/38 on high floor, high ceiling players

The 2020 NBA Draft is a strange one because it doesn’t have any guaranteed stars, but it is filled with a ton of guys that will be solid role players. It’s not a great draft to have a top five pick, in other words, but it is a great draft to have multiple late-first/early-second round picks. With the Knicks in possession of picks 27 and 38, they have a major opportunity to add two more promising pieces to their young core. Let’s not forget that they found Mitchell Robinson, their best current player at pick 36 in 2018.

With these two picks, the Knicks should target high floor, high ceiling players. This means that they shouldn’t target projects, but rather guys that have proven they can produce at the college level, and maybe even played multiple years in college. These are players that can come in and potentially contribute right away.

Be sure to check out Dylan alongside TKW staff members on our live draft show on Twitch tonight!