Knicks Drop Another Big Lead in Crushing Loss to Blazers 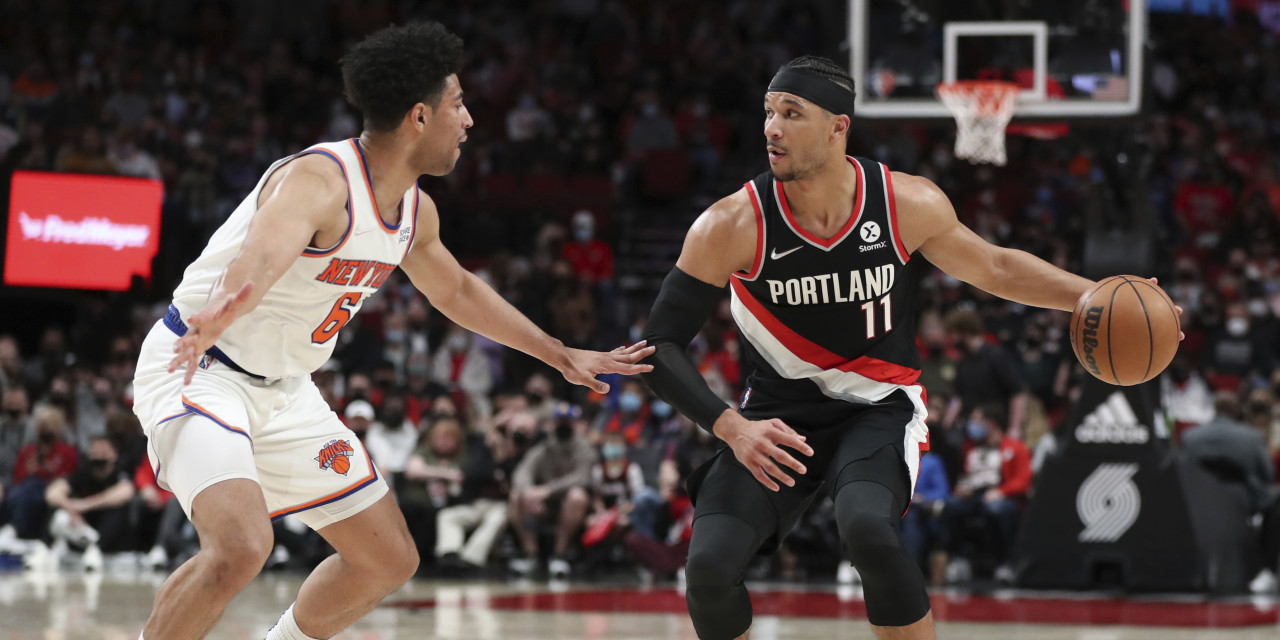 In a game the Knicks were leading by as many as 23 points, a meltdown of a fourth quarter resulted in the fourth loss of their five-game road trip.

The New York Knicks (25-32) lost a heart-breaker to the rebuilding Portland Trail Blazers (23-34) by a final score of 112-103 after winning every single quarter except for the final period, where they were outscored 35-11. Their frontcourt was severely depleted with injuries to Mitchell Robinson and Cam Reddish during the contest, and they were unable to find any offense as time winded down in spite of great performances from Kemba Walker, Quentin Grimes, and Julius Randle.

New York has had a downtrodden west coast road trip, having gone on a four-game losing streak prior to their victory over the formidable Golden State Warriors on Thursday night. They would be without RJ Barrett for the second game in a row after he suffered an ankle injury in their loss against the Denver Nuggets, and neophyte Quentin Grimes was given another start as a result.

The Trail Blazers have performed below expectations this season, but have found a breakout player in guard Anfernee Simons. Simons has been the season leader in points and assists for the Blazers, providing a bright spot to an otherwise underwhelming Portland year.

The first quarter began with some stagnancy from the Knicks. While they were able to get a handful of good looks from long range, they weren’t able to get anything to fall and, as a result, the Blazers went on a 7-0 to open the contest. Even when New York looked to drive into the paint, they were unsuccessful with off-balance efforts or errant passes. Their first bucket came with just over seven minutes to go in the first from Julius Randle. Some solid defensive sequences and success with scoring in the paint helped the Knicks go on a 21-4 well into the last minute of play, and they led by three headed into the second quarter.

New York trotted out a predominantly bench lineup plus Mitchell Robinson to begin the quarter, but Robinson quickly picked up two fouls. As a result, Taj Gibson was brought back into the game and immediately hit a jump shot in response to a Portland three-pointer. He, along with Reddish, continued to provide momentum for the Knicks’ second unit on offense, and New York kept up their paint presence against a small Portland lineup to maintain their lead.

Quentin Grimes and Kemba Walker sprinkled in some big plays as the half winded down, with Grimes making a tough and-one followed by a four-point play from Walker. Walker was especially solid in the second frame, hitting a few jump shots down the stretch to give the Knicks a five-point lead after two.

The third quarter began with Walker continuing his hot shooting from the first two periods, but the same could be said of Portland’s Simons. Simons struggled in the first half but started to get it going from deep and making New York pay for leaving him too much space behind the arc. Robinson, who had been struggling all game with no points or rebounds well into the second half, was taken out after he appeared to be injured on a play. Gibson substituted in for him.

Grimes proceeded to catch fire shortly after from deep, extending the Knicks’ lead to 21 well into the third quarter. Randle was an engine for the team akin to last season, finishing up the period with 24 points, 15 rebounds, and 5 assists. Even with a run at the end from Portland, the Knicks still led the game by 15 points leading into the final period of regulation.

New York needed to clamp down on defense if they wanted to stop Portland from getting back into the contest, but they continued to get to the basket against their frontcourt that was without Robinson once again to injury during this game. To stop the bleeding, the Knicks brought back their starters along with rookie Jericho Sims. However, the Blazers adjusted with Simons and Ben McLemore continuing to punish them from deep and bringing Portland to within four points with just under six minutes left in the quarter.

With the loss of Robinson in the paint, Portland controlled second chance opportunities down the stretch and was able to gain a one-point lead off New York’s timid paint pressure and their lack of offense. They had last scored a field goal at the nine-minute mark in the fourth. The struggles for the Knicks continued as they could not close out the game, and Portland defeated New York in a comeback victory that will sting for days to come for the Knicks.

New York’s leading scorer was Randle, who finished up with 28 points, 16 rebounds, and six assists. Walker came back to life this game, going for 23 points on 7-of-12 shooting. Grimes also had himself a game as he went 5-of-8 from deep and recorded 20 points on the evening. Evan Fournier was lackluster, only scoring four points. He did have three assists and three rebounds in his effort. Robinson had an off game, and eventually came off the court for good due to injury, but still managed to record three blocks. He had no rebounds.

From the bench squad, Gibson (eight points, seven rebounds) and Alec Burks (eight points, six rebounds, four assists) were most impactful. Reddish was active in his minutes with six points but also left the game early due to an injury. Immanuel Quickley had four points and two rebounds.

The Knicks will now go on to play the Oklahoma City Thunder on Valentine’s Day at Madison Square Garden, ending the nightmare that was their west coast road trip.