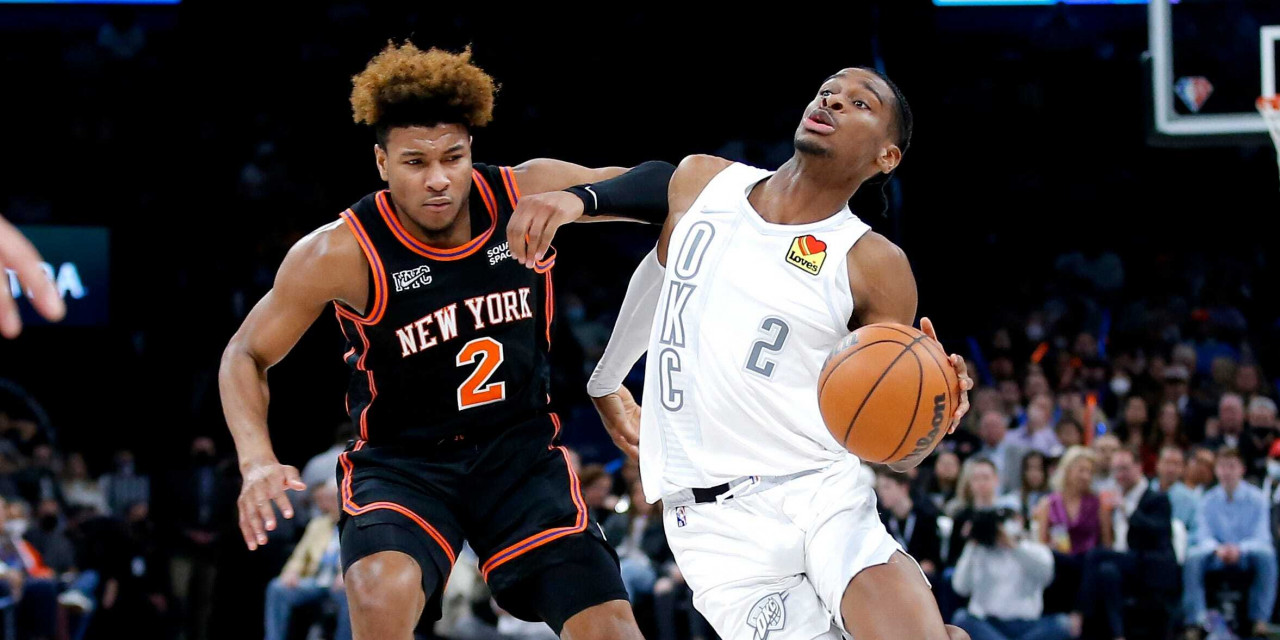 RJ Barrett led the charge after Julius Randle entered COVID protocols, but the Knicks put up a season-low 80 points in Oklahoma City.

Without their main man Julius Randle, who recently entered the NBA’s COVID-19 health and safety protocols, the Knicks slid Obi Toppin into the starting lineup for the first time in the former Dayton Flyer’s career. Kemba Walker was a late scratch, and Miles “Deuce” McBride also earned his first start in Walker’s place. The Thunder are also dealing with their own issues with COVID having four players in protocols, including their 2021 top-10 pick Josh Giddey.

The story of this game was the Knicks couldn’t buy a three-point bucket; they shot 8-of-41 on the night from behind the arc. The Thunder, on the other hand, were red-hot from behind the arc, hitting 18 of their 43 attempts. The Knicks’ poor three-point defense was on full display, allowing the worst three-point shooting in the league OKC to shoot 41.9% from long distance for the game. OKC came into the night’s game shooting 30.6%, dead last in the NBA.

It was a struggle all night on offense as the Knicks could only muster a measly 80 points with nobody getting it going besides RJ Barrett, thrust into the starring role on Friday. He kept the Knicks within striking distance all night, but it wasn’t enough, finishing the game with 26 points, seven rebounds, three assists, and a pair of steals. Barrett was the only starter that was able to eclipse double-digit points on the night.

Deuce McBride struggled in his first start, shooting just 3-for-9 on the night and tallying a single assist and a single rebound. Toppin struggled in place of Randle, scoring only five points and seeing close to no fourth-quarter action until the final three minutes. Mitchell Robinson finished the night with nine points and 12 rebounds.

Evan Fournier had the worst output after sitting out the previous game in Detriot with an ankle sprain. He was nonexistent on offense—shooting 1-of-8 from the field on the night with just three points and was also benched for the final period of the game. The only other Knick able to score double digits on New Year’s Eve was Immanuel Quickley with 11 points and 1-for-7 from downtown. Apart from their horrible three-point shooting, the Knicks were terrible from the charity stripe hitting 12-of-22 of their free throw attempts on the night.

Shai Gilgeous-Alexander led the way for Oklahoma City with 23 points, four assists, and four rebounds. Aaron Wiggins added 13 points and was a game-high +15 on the night. Thunder reserve Ty Jerome contributed to the OKC’s dominant win with a strong outing, pouring in 11 points, five rebounds, and five assists.

Next up, the Knicks head north of the border to face the Toronto Raptors in yet another winnable game versus a team that is below .500. New York can make a statement in January, as the schedule is littered with teams that have a losing record.