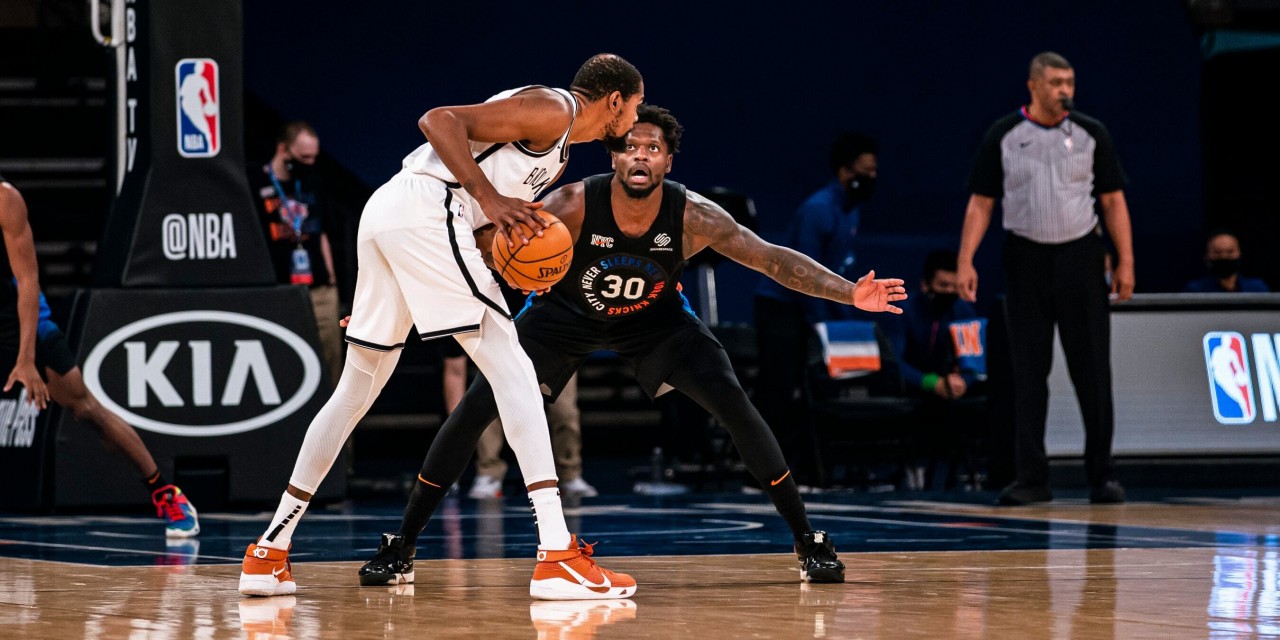 The Knicks lost their fourth consecutive game on Wednesday, this time with Kevin Durant making his Garden debut as a member of the Nets.

This felt like Kevin Durant’s subtle middle finger to Knicks fans who chirped at him since he signed with the Nets. Durant, playing his first back-to-back since his Achilles injury, set the tone early.

Durant swished his first jump shot as if to say the shorthanded Brooklyn Nets (7-6) were still good enough to win. Durant had full control of this game, scoring an easy 26 points, but picked his spots so well the New York Knicks (5-7) could never catch up.

Then again, the way the Knicks shot in the first half, even a mundane Durant would have been enough. Julius Randle bore the burden once again, scoring 17 first-half points to carry the offense. Mitchell Robinson was the only other starter to show up, adding eight points. The trio of Elfrid Payton, Austin Rivers, and R.J. Barrett was downright ugly, combining for six points on 2-for-19 shooting. The Nets took advantage of the cold spell to head into halftime with a 61-45 lead and a spread-the-wealth approach.

Things did not change much in the second half. The Knick defense relented in the third and most of the fourth before New York made it interesting. Barrett led the way with 18 points in the half, but Immanuel Quickley had an impressive 19 off the bench in the 116-109 loss.

The takeaway was that the Nets have staked their claim as the team of the city. They won the headlines and the game in impressive fashion.

A Tale of Two Halves

Did Barrett bottom out in the first half and bounce back to life?

Barrett has reached the phase in his slump where his confidence is noticeably absent. He passed up open looks and bricked jumpers. He failed to record a single field goal in the first half, scoring on his only visit to the free throw line. Even worse, he started to meander in the corners to spot up for an open three. The definition of insanity is doing the same thing over and over again expecting a different outcome, and Barrett was toeing the sanity line.

Thankfully the second half was the total opposite. Barrett attacked the rim, moved to the midrange, and netted 18 points on 7-of-9 shooting along with a dearly needed confidence boost. Barrett started to look like himself again and helped make this game feel closer than it ever really was.

Obi Toppin’s anticipated return lasted a whole 60 seconds if that. The only possible explanation is Toppin has not resumed full contact. Still, a weird move to play him for such a short amount of time.

Obi Toppin played 57 seconds in 1st half & didn't return. Tom Thibodeau said he wanted to get Toppin into the game after being cleared this morning but then didn't like the matchups and pulled him.
Thibs: "I was unsure if I was going to play him just because he hasn't practiced."

The time has come for Tom Thibodeau to tweak his rotation and lineup. Immanuel Quickley and Kevin Knox need more minutes. They are the best shooters on the roster and tonight proved their value, scoring 19 and 13 points, respectively.

This type of open look is nonexistent when the starters are in.

why Quick and Knox need more minutes in less than 15 seconds pic.twitter.com/81xOqbeZrJ

If this is a merit-based system, Quickley and Knox earned it. Thibodeau cannot rely on Randle carrying the load every night. Randle was a man among boys tonight, dropping 30 points to go along with seven rebounds, five assists, and two steals. The problem is he played 40 minutes and had to chase Durant around most of the night. This is not a sustainable formula, and right now it is a failing one.

This night was largely disappointing, but Mitchell Robinson’s empathic block brought me happiness.

The Knicks will look to get off the schneid in Cleveland on Friday night.