Knicks Dutifully Celebrate Playoffs, But Focus Next Is on Hawks 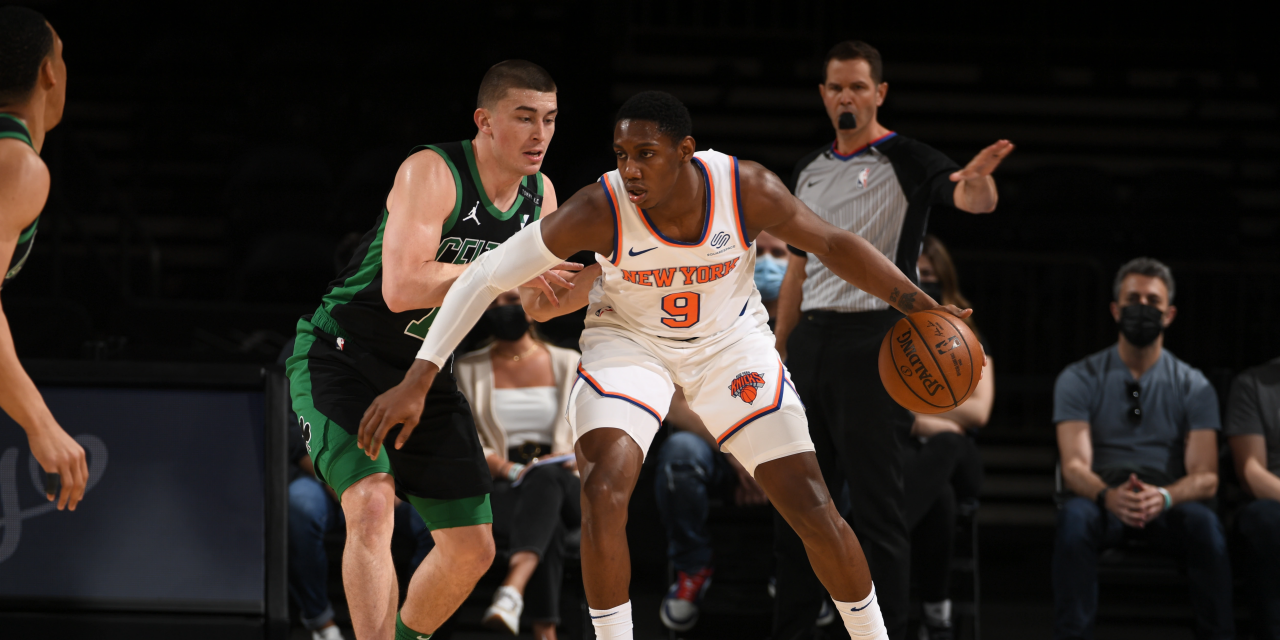 Following their regular-season finale win over the Celtics, the Knicks are already forgoing much fanfare, instead deciding to focus on the playoffs and Hawks matchup.

NEW YORK, NY — The New York Knicks clinched their first postseason berth in eight years, but the postgame tone from the coach and players was a distinctly quiet celebration along with perfunctory acknowledgment of both the players’ and organization’s successful regular season.

“The season continues on,” first-year Knicks head coach Tom Thibodeau related after New York’s regular-season finale win over a depleted Boston Celtics. “It’s important to appreciate the effort and the work that has gone into it thus far but to also understand that the challenge continues.

“There’s an intensity level to the playoffs that is much different than the regular season. So, we have to prepare ourselves for that as well,” said an almost sulky Thibodeau.

It was nearly a catastrophe in the final quarter of the 2020–21 regular season for New York, as the Knicks let a double-digit lead slip against the Celtics, who had All-Stars Jayson Tatum, Jaylen Brown, and Kemba Walker inactive along with Marcus Smart and Tristan Thompson out. Nevertheless, in what is now considered normal Knicks fashion, the fourth quarter was salvaged by key plays by Julius Randle and Alec Burks, edging a win on the final Sunday in the NBA’s 72-game regular season.

With a win yesterday and today, in addition to a Miami Heat loss to the Milwaukee Bucks on Saturday night, the Knicks draw the Atlanta Hawks in the first round of the NBA playoffs. In the 4-5 matchup in the Eastern Conference, the Knicks possess the home-court advantage.

“For us, it’s to look at what we did, enjoy today, and then prepare ourselves for tomorrow, knowing that there’s a lot that goes into preparation for a playoff game,” Thibodeau said. “You don’t want to feel too good because you know you always want more. It’s important for us to be hungry and concentrate on exactly what’s in front of us.”

The Knicks beat the Hawks in every meeting this season, 3-0, and Sunday’s home-court-clinching win was emphasized by New York’s terrific record at Madison Square Garden this season: 25-11 (.694).

Thibodeau's full answer on facing Hawks in Round 1 of the playoffs:

“It doesn’t matter,” Knicks sophomore wing R.J. Barrett opined on facing the Hawks in the playoffs after beating them three times already. “Playoff basketball is different … they’re going to give it their best and we got to be ready.”

“We’re a tough, resilient team … we kind of made our name off that,” said Barrett.

Barrett scored 22 points in what was a bounce-back performance on Sunday following a dud yesterday against the Charlotte Hornets (nine points and four assists in 27 minutes in the overtime win). Key for the Canadian was extending his range and knocking in three-pointers from the wing and corner; Barrett added a pair of triples on Sunday. Barrett’s long-range ability (40.1%) has immensely improved the Knicks’ half-court offense alongside above-40.0% three-point shooters in fellow starters Julius Randle and Reggie Bullock.

One bit of emotion shone postgame, though, when Barrett was asked about seeing through the goal of reaching the playoffs. Plenty of top draft picks for the Knicks have dreamt it and, ultimately, with no sole fault of their own, failed, but Barrett in year two is on a playoff Knicks squad.

RJ Barrett on reaching the postseason:

The NBA’s playoff schedule is not set, with other games today deciding seeding. The Knicks’ first-round matchup with Atlanta will start on either next Saturday or Sunday, though, at the Garden.