Knicks Embarrassed at Home by Bucks in Starters’ No-Show Debacle 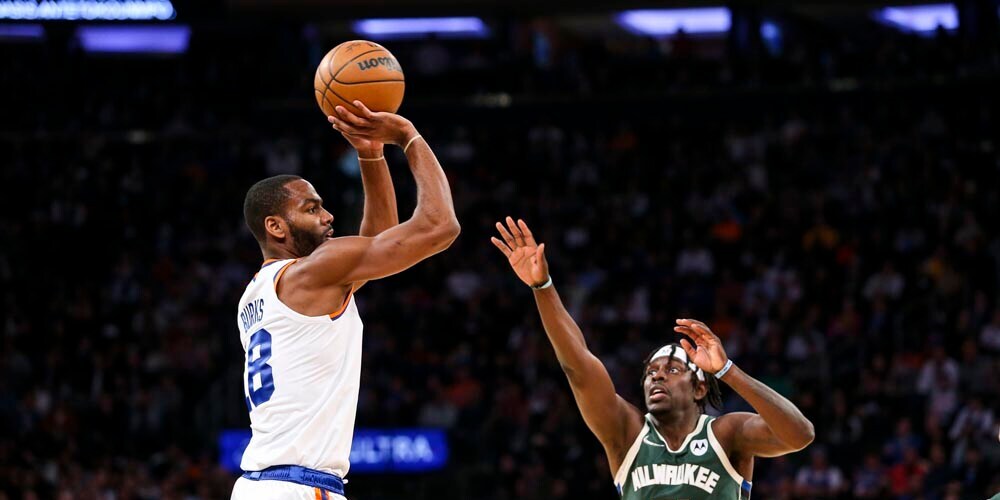 After falling into a 24-point third-quarter hole to the Bucks, the Knicks’ bench tied it up late into the fourth before succumbing to another home loss.

Well, that was exhilarating.

The New York Knicks (7-5) fell to 2-4 at home after tonight’s 112-100 loss to the defending champion Milwaukee Bucks (6-6). Since the opening night double-overtime thriller against the Boston Celtics, the Knicks have only won once at the Garden. Despite losing tonight’s contest, there are so many positives to pull from this game—but none of them coming from the starters.

Julius Randle came out on fire in the first quarter, but cooled off quickly, which has become a worrisome trend. He scored 11 of the Knicks’ first 13 points but finished the game with 16 total. RJ Barrett struggled to score, only tallying nine points, and backcourt teammates Kemba Walker and Evan Fournier had two points apiece on a combined 2-of-12 shooting. In Walker’s last three games before tonight, he was averaging 5.7 points while shooting 25% from the field, and tonight certainly didn’t help those numbers.

The starters flat out need to play better, and that’s on both ends. The lack of urgency and effort on the defensive end was inexcusable. Missed shots are going to happen, makes and misses are out of your control some nights as a player, but what can be controlled is the effort on the defensive end and the starters simply didn’t bring it. The Bucks made 26 of their 50 three-pointers tonight, and it seemed like at least half of their attempts were wide open.

Pat Connaughton hit seven threes off the bench, all of which were timely scores for Milwaukee. He ended an 11-point run from the Knicks hitting a wide-open three early in the fourth, then hit two straight threes to put the Bucks up 10 late in the fourth. He finished with 23 points, nine rebounds, and five assists. He was wide open all night due to the Knicks not rotating to shooters after doubling Bucks star Giannis Antetokounmpo.

New York last season had a bit of opponent three-point shooting luck built into their stellar defensive season, no doubt, but they also had crisp rotations and closeouts on three-point shooters that helped force so many misses. This year the lack of focus and discipline closing out on shooters has been inexcusable and it’s one of the main reasons the Knicks’ three-point defense is so flimsy.

That was the ugly from tonight, now let’s get to the positives.

The Milwaukee Bucks were up as many as 24 points with five minutes left in the third quarter, and then the “bench mob” took complete control of this game. The Knicks’ lineup of Rose-Quickley-Burks-Toppin-Gibson went on a 24-6 run to close the third quarter and to start the fourth. Rose had 23 points and seven assists while knocking in six threes, Quickley added a season-high 18 points, and Burks and Toppin added 14 apiece. Taj Gibson did not score, but his defense in the Knicks run was vitally important in New York coming back in this game. He had two blocks and one steal in the contest and was challenging Antetokounmpo’s shots in the paint all fourth quarter forcing him into tough shots.

The flashes that Quickley and Toppin showed are something the Knicks brass has to be excited about. Toppin was a disruptor on the defensive end, and as a rim-running roll man was extremely effective, scoring off of assists from the Knicks guards. Immanuel Quickley as a creator for himself and others continued to look sharp. The pace and energy these two provide the bench unit cannot be measured, but watching the games, you can just see and feel it. Each of them has absolutely earned more playing time every time they’ve stepped on the court, and hopefully, tonight proved that to the coaches on the sideline.

The bench mob did all they could to get the Knicks this win, but the dud the starters dropped to start the second half proved to be too much. Their effort and urgency on both ends have not gone unnoticed this season. It was a fun game overall, but there are a lot of kinks the starters need to work out before this team can reach their full potential.

The Knicks head to Charlotte on Friday to take on a young, exciting, and emerging Hornets team and avoid going on another losing streak.