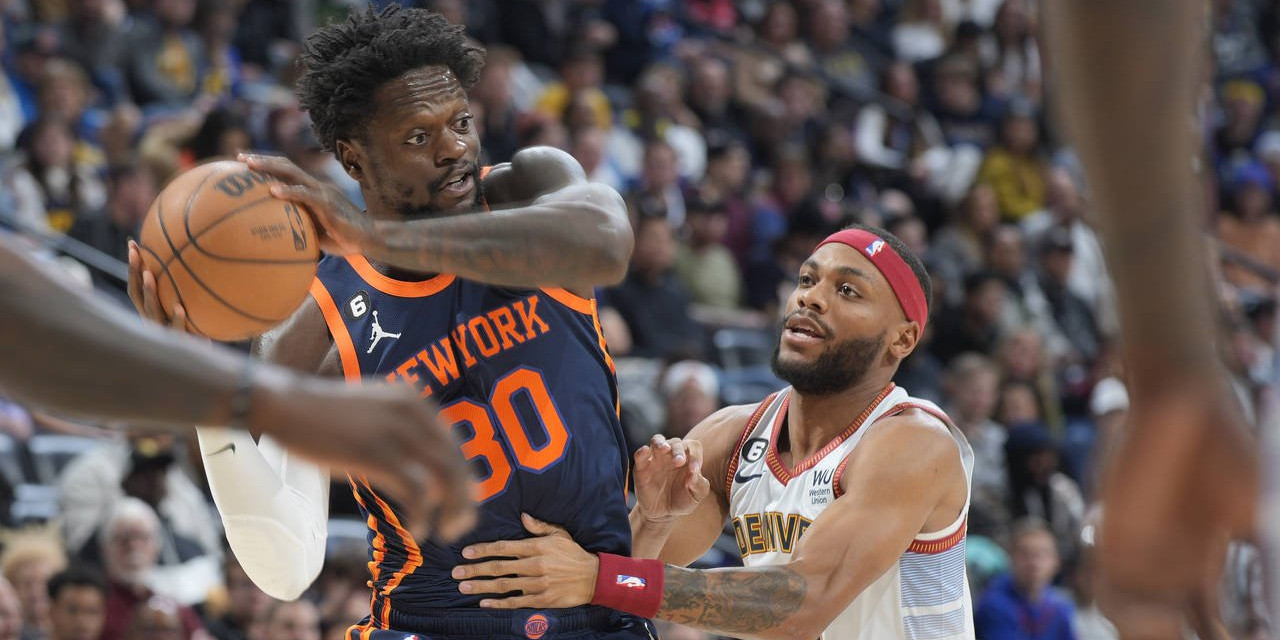 Julius Randle powers the Knicks to victory as New York wins in Denver for the first time since 2006.

On the second night of a back-to-back, the New York Knicks (8-7) traveled to Denver to face off against the Nuggets (9-5). In a thrilling 106-103 victory that ended a 16-year winless drought in the Mile High City, the Knicks also gave the Nuggets their first home loss of the season just like they did the Jazz the previous night. After an excellent all-around team performance in Utah, the Knicks again looked to prove the doubters wrong against another tough Western conference squad that is currently without their former MVP Nikola Jokic but caught a break as sophomore standout Nah’Shon “Bones” Hyland returned to the line up after missing the previous two games.

Missing their main piece didn’t stop the Nuggets early but the Knicks were able to keep up with the pace led by Julius Randle who got off to a quick start scoring 12 points in the first quarter; he finished the first half with 24 points. New York ended the first quarter on 17-7 run to take a 30-27 lead.

Randle throws it down!! pic.twitter.com/ueSK1xD6dz

In his first minutes of action, Obi Toppin continued his excellent play off the bench providing fast offense. Derrick Rose also contributed throughout the game after recent uncertainty about his role and playing time he has started to find his stride. RJ Barrett, who has been dealing with some kind of illness in recent days, looked out of sorts and really struggled in the first half of the game, shooting an abysmal 2-12 from the field including 0-6 from beyond the three-point line; he saw little improvement the rest of the game. The Knicks took a 55-54 lead into halftime. With a quiet first-half scoring wise Jalen Brunson played the orchestrator feeding a scorching hot Randle.

clutch play of the game? 👀 pic.twitter.com/fkeO9c1bFs

The second half started off just like the first with both teams trading buckets keeping the score close. Jalen Brunson took to scoring early in the third and scored seven quick points to set the tone for the Knicks.  After some back-and-forth action to keep things close the Nuggets bench came alive on the back of Bones Hyland, who had a couple of back-to-back highlight plays with a buzzer-beater to end the third quarter and four-point play to immediately start the fourth quarter; the Nuggets would build a ten-point lead off the effort of their reserve unit and take control of the game. But, the Knicks would not go away as in crunch Julius Randle reasserted himself into the game and lead the charge erasing a 10-point Denver lead with under three minutes to go. With 50.6 seconds left Julius Randle stepped to the foul line and sank one of two free throws to give the Knicks a one-point lead. At the other end, the Knicks were able to get a stop and Denver once again fouled New York this time, it was Jalen Brunson with 10.5 seconds left who sank his two attempts from the charity stripe as New York was able to escape Denver with a narrow three-point victory winning for the first time since 2006 after Immanuel Quickley stopped Jamal Murray on the Final possession of the game.

The Knicks have seemed to have responded well to the players’ only meeting as they are now over .500 heading to Golden State to face off against the struggling defending champion, Warriors.