Report: Knicks Expected to Be in on Anthony Davis Sweepstakes 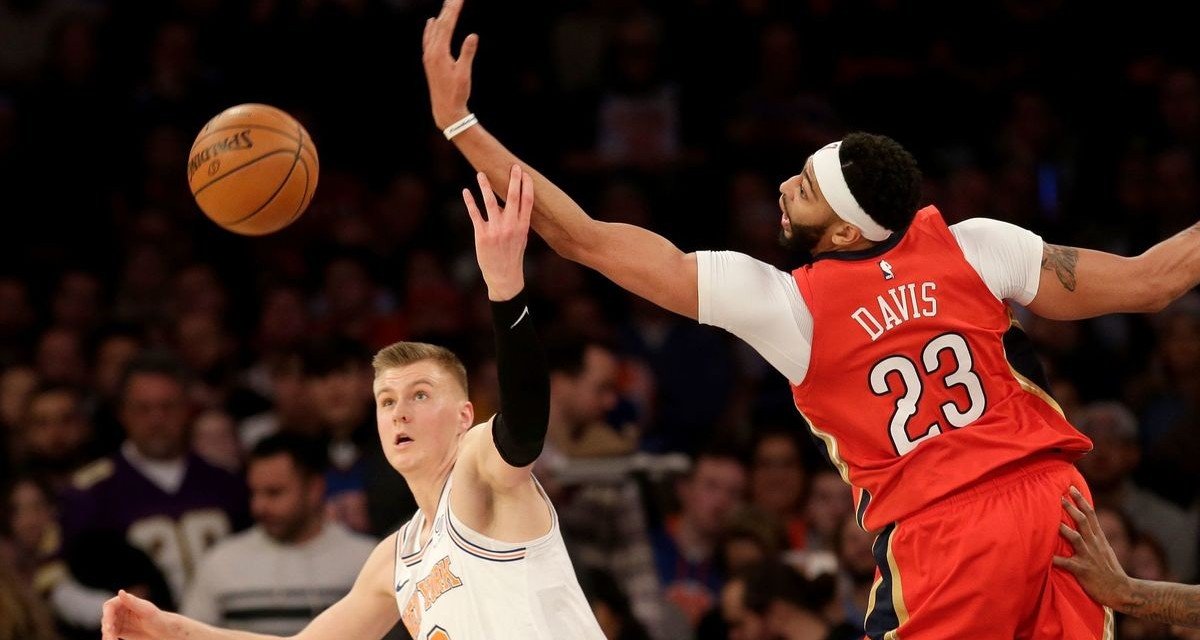 Can the Knicks put together a trade package for Anthony Davis without gutting the roster?

Once again, temptation has come knocking on the Knicks’ door.

With 11 days until the trade deadline, Anthony Davis has made it known he wishes to be traded. ESPN’s Adrian Wojnarowski dropped a nuke Monday morning, reporting that Davis’ agent, Rich Paul, informed the Pelicans his client does not intend to sign an extension when his deal is up at the end of the 2019–20 season.

Davis making his intentions known now gives the Pelicans some leverage in trade discussions. Any interested team would get a season and a half at the minimum, with an inside track to re-sign him.

In October, Davis reportedly had a short list of teams he was interested in, should today’s news come to fruition. On that list were the usual suspects: Lakers and Celtics, with the Sixers and Knicks rounding out the contenders for the All-Star.

The clear front-runners are the Lakers, thanks to the Klutch Sports connection. Rich Paul is not only AD’s agent, but a close friend of LeBron. The Celtics are right behind their rivals, with enough pieces to offer the best package. The Sixers could make a play, if Jimmy Butler doesn’t plan to stick around, but for now it’s radio silence in Philly.

Then there are the Knicks. Before fans start photoshopping Davis in orange and blue, a dose of reality: Davis wants to contend for a title now. He has already wasted three prime seasons elevating an undermanned Pelicans team, and even with a healthy Kristaps Porzingis, Davis would only step into a marginally better situation in New York.

The front office will be aggressive in their pursuit, as Mike Vorkunov of The Athletic confirmed. If a deal were to be made, the team would have to part with draft picks, young players, or both. A Porzingis for Davis swap could be what the Pelicans want, but would not meet Davis’s expectations.

Without Porzingis on the roster, Davis would be downgrading from his current situation. The only way a deal like that has appeal for Davis is with a wink-wink agreement between Davis and impending free agents Kyrie Irving and/or Kevin Durant to link up this summer; an unlikely scenario to say the least.

New York’s best chance to snag Davis without parting with Porzingis would be unprotecting their 2019 pick. At the time of this writing, that pick has a high probability of being in the top three, which could give the Pelicans a golden opportunity to kickstart life post-Davis.

The problem is the Knicks have bled all season for that pick—and even that might not be enough to consummate a deal. An inclusion of Frank Ntilikina, Kevin Knox, or Mitchell Robinson might be needed. Gutting the roster of assets for a star is essentially a redux of the 2011 Carmelo Anthony trade with Denver.

Obviously the chance to land a top-five talent is enticing. Still, the Knicks would be wise to learn from their past transgressions and hold off. If Davis finds New York appealing now, he can sign with the team as a free agent in 2020, when the team is closer to the situation Davis not-so-discreetly desires.

Marc Stein reports the Knicks will be a factor in the Anthony Davis sweepstakes:

Even though it is likely that the Knicks' strongest offer for Anthony Davis would come in May once their draft position is known, one source with knowledge of the team's thinking confirms that the Knicks are intent on making themselves a factor in the Davis Sweepstakes