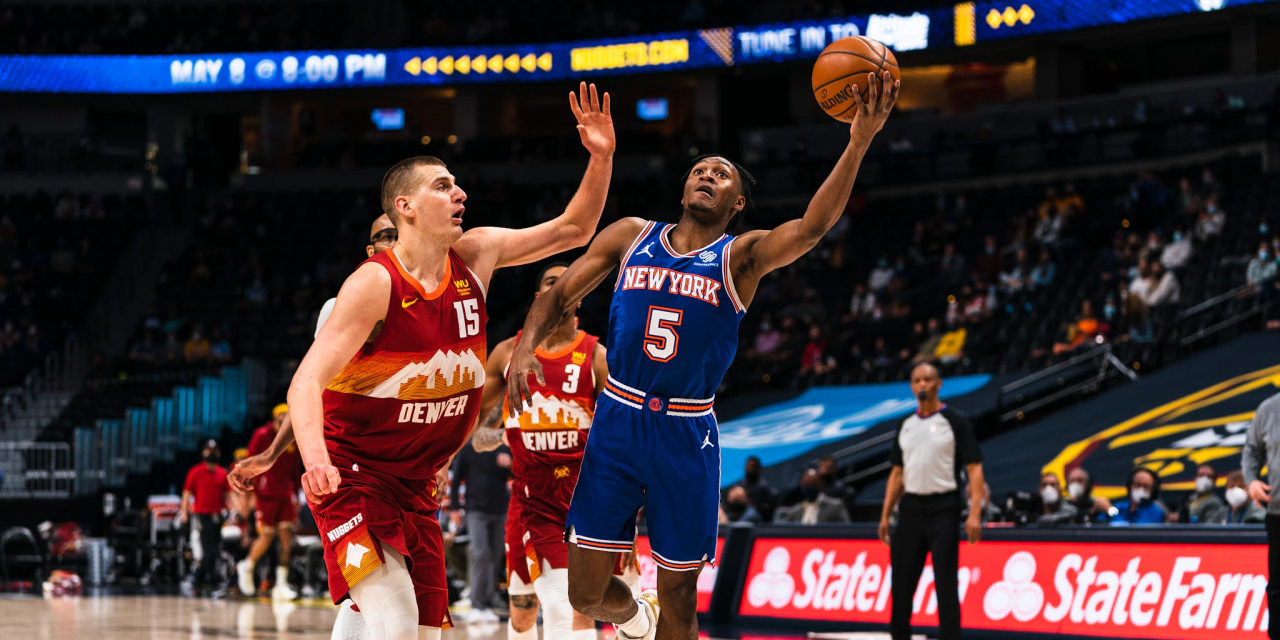 The Knicks were no match for MVP front-runner Nikola Jokic and the Nuggets in Denver, suffering their 13th consecutive loss in the Mile High City.

Life always has a way of humbling you, and on Wednesday night the New York Knicks (37-29) were humbled in Denver. For the past 13 games, the Knicks have flying high and beating teams up. Tonight it was the Nuggets (44-22) who handed out the beat down.

The Knicks have rarely been blown out this season with one of those previous instances also being against the Nuggets; a 25-point loss at the Garden. A change of scenery did nothing as the Nuggets steamrolled the Knicks 113-97.

Nikola Jokic started the game by telling the Knicks to get their shine box. The All-Star center poured in 24 points on 8-of-9 shooting, grabbed six rebounds, had two blocks with an assist and a steal. The Knicks as a team scored 12 points. The trend did not change for the rest of the game.

The Knicks had their moments, mainly when their bench unit was in, but the Nuggets starters were too much to handle. Jokic mercifully scored just eight more points even though he could have easily had 50. Michael Porter Jr. filled his role as the second scorer, point guard Facundo Campazzo played noticeably well, and one-time Knicks guard Austin Rivers had his best game as a Nugget. Garbage time started sometime in the first half, even as the Nuggets clearly dialed it back in the second half.

Jokic should have earned the respect of every Knick fan tonight. Julius Randle came into this game with everything going for him, including MVP talk. Jokic is a front-runner for MVP, and it appeared he wanted to let Randle and the Knicks know that.

In the first 40 seconds of the game, R.J. Barrett earned two fouls and Tom Thibodeau had a technical foul. That ended up being an omen for the first half. Jokic did whatever he pleased, the officials called any contact and the Knicks could not hit a shot.

Before the bench mob checked in to make the Knicks looked like they were shooting on a boardwalk rim. Rose accounted for 14 points on 6-of-9 shooting; the rest of the team shot 27.0% from the field and 14.3% from three.

Sloppy turnovers and poor defense completed the cycle of foulness. The Knicks have been on the good side of momentum for such a long stretch it felt odd being back on the other side.

There is a reason Tom Thibodeau loves Derrick Rose and Taj Gibson.

Once again Rose came off the bench and provided immediate offense. Without his 14 first-half points, the Nuggets might have taken a 50-point lead into the locker room.

Gibson had a play that was emblematic of his importance to this team. Down 24 points in the third quarter Gibson pokes a ball loose, dives on the floor, saves the ball and the Knicks ended up getting an and-one opportunity. It’s hard for the younger guys to sit back and watch the oldest guy play that hard with the game so out of reach.

Following that sequence, Barrett finally hit a pair of threes and the Knicks had their best stretch of the second half.

These efforts were made in vain, but they are a reminder of the value the veterans bring.

RJ with the STIFLING defense and then hits Obi with the LOB in transition! pic.twitter.com/Fg6Hnd8ysL

Obi Toppin has run the floor well all season, now that his teammates are finally finding him he can start to utilize that leaping ability.

The Knicks will travel to Phoenix for a Friday rematch against Chris Paul and the Phoenix Suns (47-19).