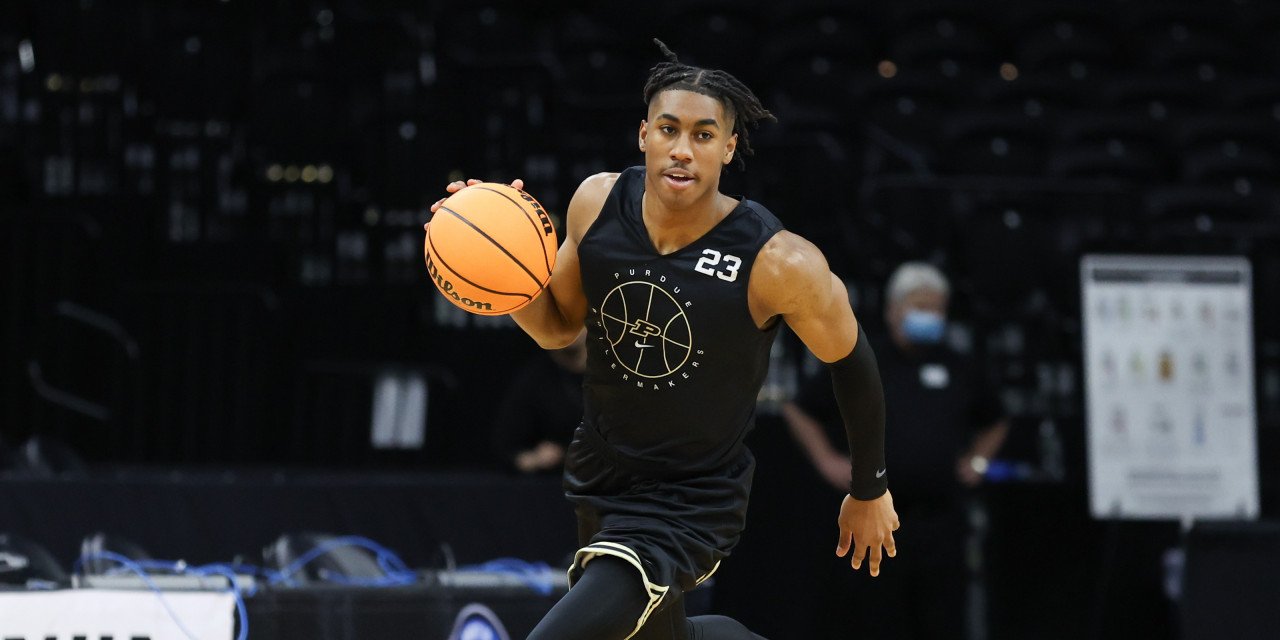 Jaden Ivey, seen as the prize after the vaunted top-three big men, could be headed to the Knicks should the Kings agree to a lucrative trade offer.

The New York Knicks will enter the 2022 NBA Draft in possession of the 11th pick, hoping to trade up for a stud. For weeks now, the two hottest names buzzing around the Knicks front office have been Jaden Ivey and Dyson Daniels, both of whom will be gone by the time they are on the clock.

According to multiple sources with close knowledge of the team, Jaden Ivey is the most coveted player within realistic reach for the Leon Rose–led Knicks. The 6-foot-4 guard out of Purdue is coming off a stellar collegiate season, averaging 17.3 points per game for the Boilermakers, in large part due to athletic capabilities distinguishing the 20-year-old from his draft class. His combination of speed, strength, and explosiveness mold to form as NBA-ready a body as you’ll find, and his ability to finish at the rim synthesizes each one of his tools. Additionally, with a 6-foot-10 wingspan, coupled with athleticism, Ivey is an absolute nightmare in the open court.

In recent days, talks have intensified with the Sacramento Kings, who possess the fourth overall pick. With Jabari Smith Jr., Chet Holmgren, and Paolo Banchero expected to be the consensus top three picks in the draft, the Kings sit in a perfect position to land Jaden Ivey, should they covet the young guard.

“I haven’t been in contact with them, didn’t work out for them. I’m kind of just letting this process handle itself,” Ivey told reporters of the Kings during media availability on Monday.

The Knicks have been pushing hard to make a deal work with the Kings. However, a possible compromise could be hindered with multiple teams rumored to be interested in the fourth overall pick as well. Not to mention, the Kings could get funky, keep the pick, and draft somebody else, leaving a club behind them in the draft like the Detroit Pistons to take Ivey. (The Knicks checked in with the Pistons, too, this week, per SNY’s Ian Begley.)

For the Knicks, the biggest obstacle to acquiring youth is … youth? A source with close knowledge of the team relays that the Kings are looking for a package likely consisting of the following, in exchange for the fourth overall pick and possibly Richaun Holmes: a young player (Quickley, Toppin, or Grimes), Cam Reddish, Alec Burks, and two first-round picks, one being the 11th pick.

However, the Knicks have been unwilling to part with Quickley specifically, who is believed to be Sacramento’s preferred youth component. On the other side of the table, multiple sources have confirmed New York’s willingness to send three-to-four first-round picks (including the 11th pick overall), as well as at least one veteran contract to offload (Nerlens Noel or Alec Burks). So far, neither side has been willing to close the gap.

Regarding the Knicks contacting the Pistons about the fifth overall pick, such talks have not surpassed the exploratory phase, perhaps indicating confidence in a deal finalizing with the Kings on time. Among the names not mentioned above is Julius Randle, who is coming off an underwhelming season, one year removed from his Most Improved Player and All-NBA Second Team campaign. Randle also happens to be represented by CAA’s Aaron Mintz—Jaden Ivey’s agent. Weirder things have happened.

The possibilities to trade up for Ivey exist if someone is willing to budge. In the off chance that he’s not available in that 4-5 range, Knicks brass has also had high praises for G League Ignite’s Dyson Daniels. The 6-foot-8 defensive pest is almost reminiscent of another particularly Australian wingman. He’s a long, intelligent defender with impeccable instincts, a knack for finding open teammates, and has a solid rebounding tenacity.

Both guys would be of incredible help to the Knicks in their own respective ways. However, if the front office allows the persistent logjam of guards to prevent the team from upgrading that pool of talent, there may be another typical draft night for the Knicks: a bunch of buzz around trading and drafting for a better future, and little action to show for it.