Knicks Face the Best of the West, Harden and the Rockets 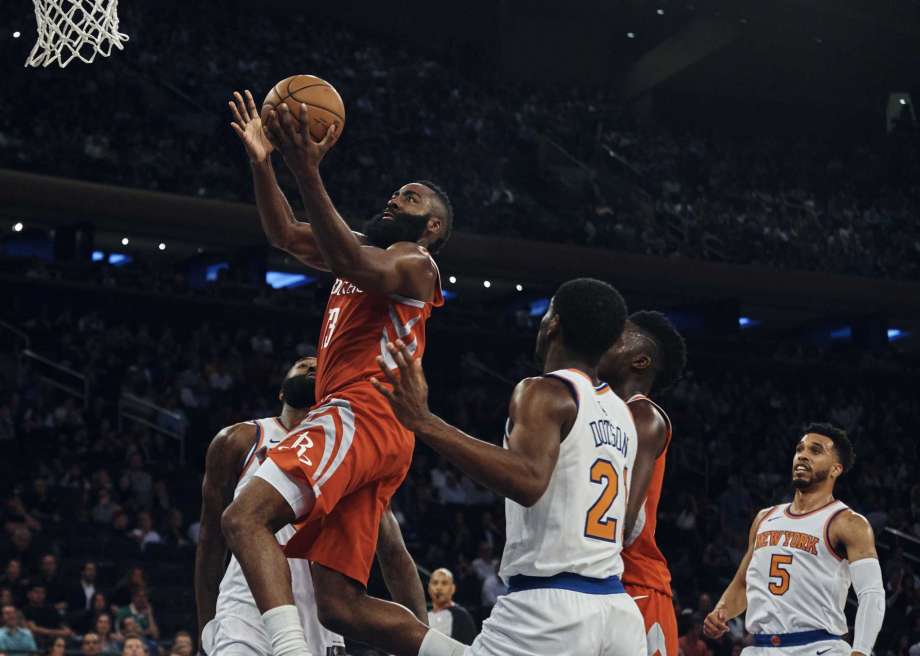 After a tough loss in Atlanta on Friday, the Knicks look to bounce back in Texas on Friday.

The road woes continue for the Knicks as they head into the unfriendly confines of the Toyota Center. To say the team has struggled in Houston would be putting it nicely. In the last ten seasons, the Knicks have left H-Town with a W just once, during the 2014-15 season. Tonight will be an uphill battle to change that misfortune, as the Rockets will have fresh legs while the Knicks come in on the second leg of a back-to-back.

Last night in Atlanta was a sobering loss. It reminded us that this team does possess potential, but also has a long way to go to reach it. That potential flashed itself in that first quarter last night in which the Knicks scored 39 points in the first quarter. Everything after that was ugly as the Hawks dominated play for the remaining three quarters. Mind you, the Hawks are tied for the worst winning percentage in the league.

Now Jeff Hornacek must rally his troops for a quick turnaround against the team with the best record in the Western Conference. It is extremely early in the season, but James Harden is on pace for yet another MVP top-five finish. Harden is leading the league in scoring and assists, and recently got Chris Paul back. The addition of Paul has had no ill effects on the Rocket chemistry =, which means even more trouble for the Knicks.

To win this game the Knicks will have to slow things down. Hornacek has preached speed, but running with the Rockets is akin to challenging Usain Bolt to a 100-meter dash. This will be an extremely tough matchup, but here is what you should look for if the Knicks are going to pull this one out.

This could be due to how young this team is, or it could just be a coincidence. This team absolutely stinks on the road. At home they are 9-3, average 109.4 points, shoot 48.0 percent from the floor, and turn the ball over less (15.2 per game). On the road, issues pop up all over the floor.

In addition to looking mundane away from MSG, the stats further hammer their road woes. They are 1-5 thus far, average just 95.7 points per game, and their field goal percentage dips to 44.1 percent. They are also sloppier with the ball (17.2 turnovers per game), just as they were last night in Atlanta. It is starting to become clear that home is where they will see success, but if they plan on playing meaningful basketball in the spring, that trend must change.

Will the Real Knicks Defense Please Stand Up?

You want to talk about split personalities? The defense consistency has been as consistent as the subway. On Wednesday night, the Knicks put together a defensive masterpiece in the third quarter. They held the Raptors to just ten points and they did it by being active. On Friday against the Hawks, the defense energy dipped like the temperature on a cold November night.

?️ #Knicks Film School Redesign! Here's a sample of the new look. Let me know what you think. Notice how the Rockets create help problems before they even reach half court pic.twitter.com/2I0JmTLr1N

The Hawks outscored them 92-65 in the last three quarters. There were way too many open threes. The hustle from Wednesday night said an Irish goodbye Friday as all the energy left the team after a phenomenal opening quarter. If we see the Knicks we saw for the last three quarters last night, then the Rockets might touch 130 points tonight. But if that team that showed up in the third quarter of Wednesday night can resurface, there is no reason they can’t mess around and win this game.

Bring the Bully Back

One glaring feature missing from last night was their toughness. With Enes Kanter out of the lineup last night due to back spasms, his absence was felt strongly. The offensive rebounding was nonexistent as the Knicks pulled down just five all game. That has been a strength all season as they rank seventh in the league in offensive boards at 11.1 per game. Conversely, the Hawks raked in 13 offensive rebounds, including some crucial ones late in the fourth to seal the game.

If Kanter cannot go again tonight, where is the toughness going to come from? In addition to being an asset on the floor, Kanter has been the heart and soul of the team. Everything Joakim Noah was brought in to do is exactly what Kanter has done. The same swag wasn’t there last night. Even another strong outing from Porzingis was not enough. If it was not obvious before it sure is now–this team needs Kanter in the lineup.

Just to hammer this point home following last night’s loss, Kanter put the blame on himself:

Enes Kanter, who sat with back spasms, took this loss hard: "If you’re looking for who to blame, you guys can blame me. Because I was just here like a little baby trying to get my back right. So it’s tough to see my teammates battling in a war, and I’m just here like a crybaby."

I will run through a brick wall for this guy and I’m willing to bet his teammates would too.

Match up of the Night: Chris Paul vs. Frank Ntilikina

Frankie Ntillmatic has had some growing pains this week. On Monday, he played through flu like symptoms, but was a virtual no-show against the Clippers. He was much better against the Hawks last night, but you can still see him struggle at times offensively. Tonight he will likely match up with Chris Paul at some point, so Frankie better take some notes.

Paul is still working himself back from a knee injury, but will still offer the rook some lessons on how to play point at the highest level. Since returning from injury CP3 has averaged 17.0 points, 9.3 assists, and 2.3 steals. Frankie’s defensive chops will be put to the test. The Point God will not impose much of a physical threat, so Frankie gets a crash course in savviness.

This is Frankie’s first true test of the season. So far he hasn’t really had to deal with elite point guards. The only other top guys the Knicks have faced have been Kyrie Irving and Russell Westbrook, both games in which the rookie did not play much. It will be interesting to see how Frankie attacks. He has the size advantage, so attacking the basket would be a welcomed sight. He has slowly began to feel more confident in his offense as of late. Paul is not as fast as he once was, so Frank should be able to finagle his way to the rack. On defense, Paul will hit him with fakes, dupe him into fouls, and generally pick at him.

How our French son responds to the challenge will be huge. Thus far he has proven to be poised and unbothered by physical play. Tonight he gets into a possible chess match with the league’s Bobby Fischer.

Porzingis and Kanter will be inactive tonight in Houston, per ESPN’s Ian Begley:

Enes Kanter (back spasms) and Kristaps Porzingis (lower back tightness) are out tonight against Houston, the Knicks announce.