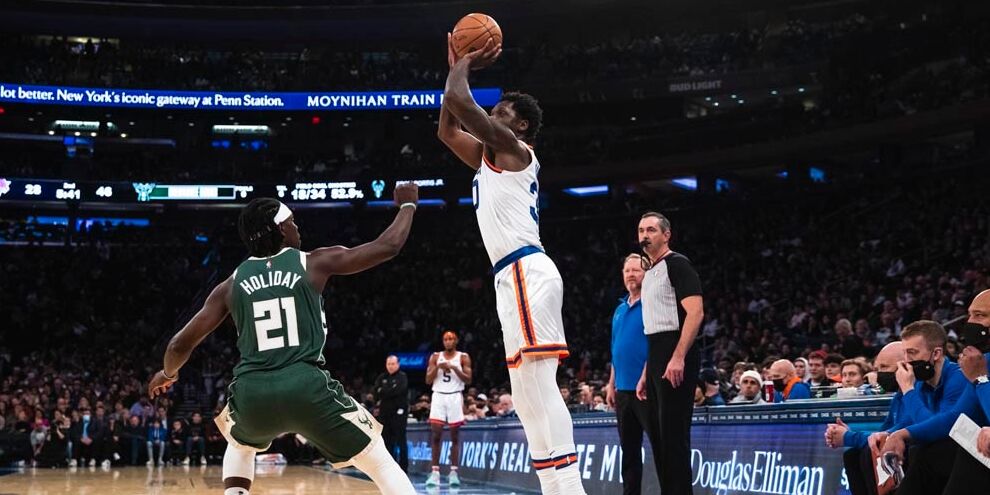 The Knicks will look to avoid their third consecutive loss as they face Giannis Antetokounmpo and the Bucks in Fiserv Forum.

The New York Knicks (23-26) are on the road again for their second consecutive nationally televised contest against the Milwaukee Bucks (30-20).

The Knicks continued to spiral Wednesday in a loss against the Miami Heat. New York’s entire starting five was completely unplayed by Miami, typified by being outscored by 19 points during starting point guard Kemba Walker’s starter-low 19 minutes. This has been the recurring theme amongst this unit the entire season. According to NBA.com, the Knicks’ starting five of Walker, Evan Fournier, RJ Barrett, Julius Randle, and Mitchell Robinson has an overall Net Rating of -15.4 in 364 minutes (the six closest five-man lineups by minutes played are all positive).

Frustratingly, this same starting five that clearly does not play winning basketball together is thrown out there every game to stink it up for the first five-to-eight minutes of every game. ESPN’s Brian Windhorst did report yesterday however that with the trade deadline fast approaching, the team is actually looking to move off of the veterans, specifically Alec Burks, Evan Fournier, Kemba Walker, and Nerlens Noel, taking minutes from New York’s younger players.

Windhorst lists Burks, Kemba and Fournier as 3 names the Knicks could be looking to move by the trade deadline

Could be a very active deadline pic.twitter.com/TPBrBZSAoT

Until then, it doesn’t appear the lineup will be changing for tonight as Tom Thibodeau has been reluctant all season to make a change.

The Knicks have listed Ryan Arcidicono and Nerlens Noel as questionable and Derrick Rose out. For the Bucks, Brook Lopez is out, Rodney Hood is doubtful, and Wesley Matthews is probable, per the injury report.

New York can tie up the season series against Milwaukee tonight at two apiece. But in their last two meetings, the Bucks handled the Knicks fairly easily since they, and the rest of the NBA for that matter, don’t have much of an answer for Giannis Antetokounmpo right now. The Greek Freak is arguably the best basketball player in the world right now, and the front office has done a great job surrounding him with All-Star teammates and a strong supporting cast.

PrizePicks of the Night

The Knicks Wall’s exclusive partnership with PrizePicks presents the picks of the night. Tonight, we’re going with Knicks center Mitchell Robinson, who has been a beast in the month of January. His first-half rebounding projection is set at 3.5. We’re hitting “over” on that. For the Bucks, Jrue Holiday’s points projection is set at 16.5. We’re also going “over” on that.

So how can the Knicks find success against such a juggernaut of a team in a primetime television slot?

For starters, the team just has to play with more heart, more passion, and more urgency. The Knicks don’t even give themselves a chance against the league’s best team when the team’s effort overall is lacking. But the effort level has been waxing and waning all season with multiple staff members, players, and media members mentioning how the team’s effort level just wasn’t there. This season has been the antithesis of last when it comes to giving effort on both ends and defending at a high level night in and night out. If New York continues to come out flat, without a sense of urgency, expect more of what happened Tuesday against Miami to continued tonight.

If that does change, though, giving the standout rookie Quentin Grimes consistent minutes on the wing is a must. The Bucks’ main ball-handlers in the halfcourt are former All-Stars Khris Middleton and Jrue Holiday, who are both extremely efficient in creating for themselves and for others. Kemba Walker and Evan Fournier have proven to be defensive liabilities for New York, and too many minutes of them against a team as dynamic as the reigning champs could be an issue. Grimes has been a breath of fresh air off the bench on both ends. He’s deservedly worked his way into the rotation, but he should honestly see more minutes than he is getting.

The offense has started to shift to running through RJ Barrett more as the primary scorer this season, leaving Julius Randle with an even bigger playmaker role than before. On a game-to-game basis, this has been a roller coaster for the former All-Star. He has a tendency to barrel into the lane with his strength without knowing what to do with the ball, often leading to a turnover. Antetokounmpo is one of the best weak-side help defenders of recent memory and is excellent at forcing turnovers just with his presence.

Randle cannot go into the lane looking to pass. He has to be more aggressive going to the basket. The Knicks are at their best when Barrett and Randle are both clicking simultaneously, and too often this season that has not been the case. Giving Milwaukee extra possessions is a recipe for disaster. If Randle and the Knicks as a whole can cut down on those, make their shots, and give more minutes to the players who deserve them, the ‘Bockers could bounce back in a big way tonight against the reigning NBA champs.