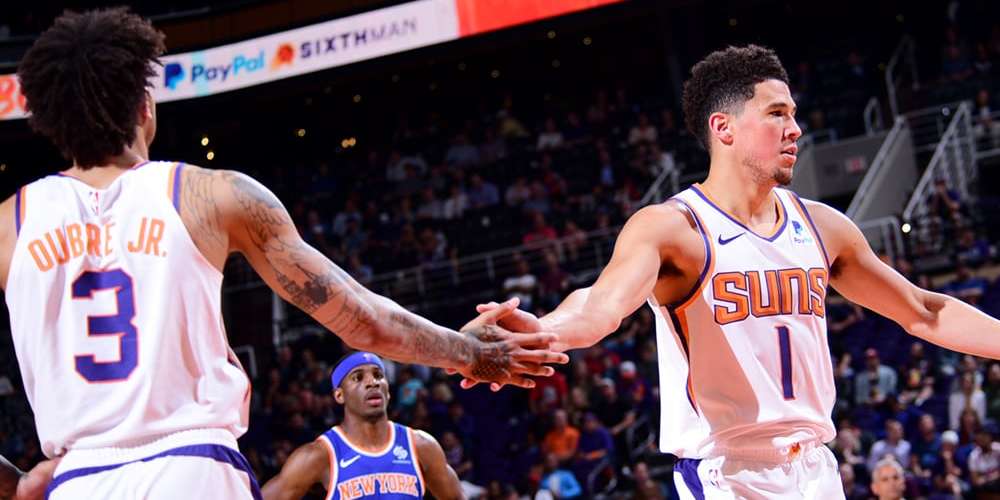 After a satisfying victory over the Blazers at home, the Knicks are in Phoenix to take on Devin Booker and the Suns—their first road trip of the year.

The New York Knicks kicked off 2020 with a resounding home win over the Portland Trail Blazers. New York now embarks on a four-game road trip, starting with a Friday night matchup against the Phoenix Suns at 9:00 p.m. ET.

Phoenix’s second-leading scorer is 24-year-old forward Kelly Oubre Jr., who is having his best professional season to date. He’s averaging 18.0 points and 6.0 rebounds on 45.7% from the field and 34.9% from three. The Suns’ starting lineup consists of Booker, Oubre, Ricky Rubio, Aron Baynes, and Dario Saric.

The Suns also have 2018 first overall pick Deandre Ayton. The 6-foot-11 center has missed most of the season due to a suspension and ankle injury. Through four games, he’s averaging 14.5 points and 12.3 rebounds per game.

Phoenix is stronger on offense than defense. The team ranks first in assists per game, sixth in the league in points per game, ninth in Offensive Rating, and 11th in field goal percentage. Part of the reason for its strong scoring is free-throw shooting: Phoenix ranks third in free throw percentage and seventh in made free throws per game.

The Knicks still have the league’s third-worst record, but they’ve picked it up lately. They have won their last three games by an average of 14.3 points. Although only one of these teams would make the playoffs, it’s refreshing to see the Knicks take care of business.

Julius Randle’s strong play is one of the biggest reasons for the streak. After driving everyone nuts to start the season, Randle is finally showing why he’s the Knicks’ highest-paid player. During the win streak, Randle is averaging 28.3 points on 53.2% field goal shooting, 47.6% 3-point shooting (with 3.3 made triples), and 81.8% free throw shooting.

I wonder if eliminating Point Randle has anything to do with the spike around December 6th ?

Granted, Randle is averaging 3.3 turnovers, only attempting 3.7 free throws, and is a weak defender, but his play has still been very encouraging, nonetheless.

Another catalyst has been the team’s improved defense. During the streak, New York hasn’t let any opponent score more than 100 points or shoot over 40% from the field. The leading scorers for each opponent that were active (Spencer Dinwiddie, Isaiah Thomas, and Damian Lillard) shot a combined 15-of-56 on field goals.

Smith has missed New York’s last three games. Payton has played in New York’s previous 13 games (starting in the last five) after missing 17 games with a hamstring injury. His playmaking and defense have made him a stabilizer for the Knicks.

These injuries leave Frank Ntilikina as the Knicks’ only point guard once again. In the six games that Payton and Smith were both unavailable, Ntilikina started the last five and averaged 32.2 minutes per game. He averaged 8.0 points, 3.8 assists, 1.8 steals, and 1.5 blocks while shooting 44.2% from the floor and 47.1% from deep.