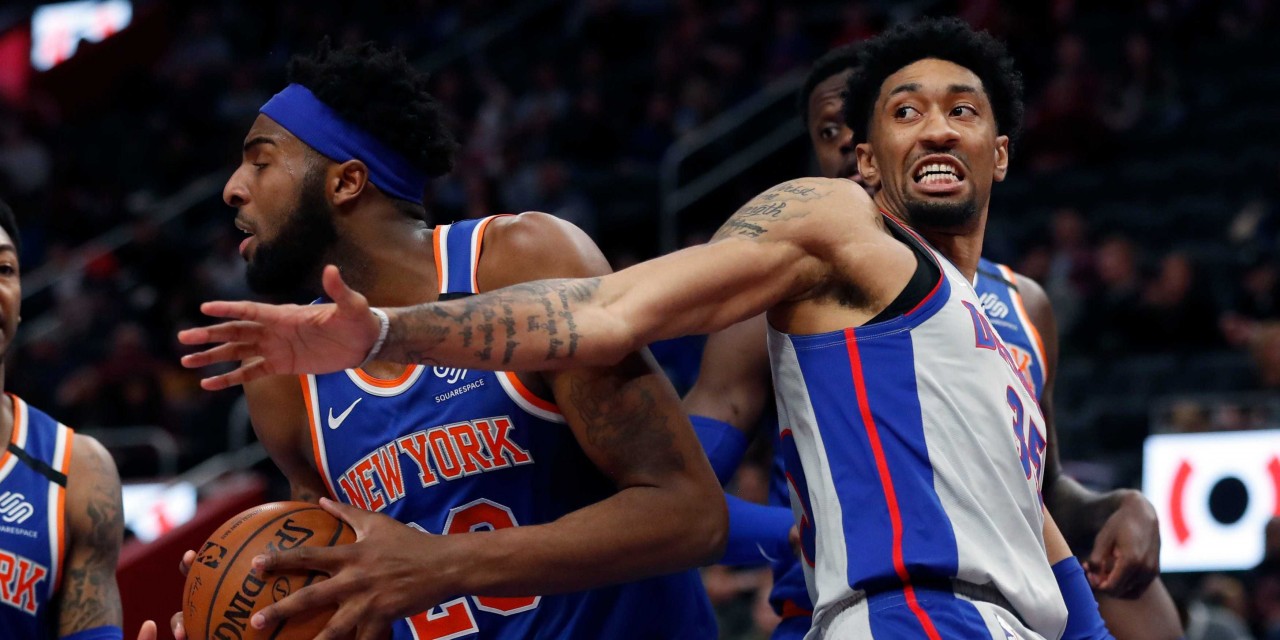 Before heading on the road for three games, the Knicks host the spiraling Pistons on Sunday night for a Daylight Savings Day affair.

The Knicks are currently on a two-game losing streak, with their most recent loss coming by 23 against the Thunder on Friday night. As much as the Knicks have struggled with a 2-8 record in their last 10, things have been even worse for the Pistons.

The Pistons have lost 10 of their last 11 games and visit Madison Square Garden having lost three straight. With Blake Griffin injured, and Andre Drummond traded at the deadline to the Cleveland Cavaliers, there’s not much to look for from this team.

However, the one bright spot for the Pistons has been their big man who’s replaced Drummond: Christian Wood. In the 1 games since the NBA’s trade deadline, Wood has averaged 22.0 points, 10.4 rebounds, and 1.0 blocks per game while shooting 53.4% from the field and 37.5% from beyond the arc. He’s been on an absolute tear, and the Knicks’ frontcourt will have their hands full.

Additionally, Derrick Rose, one of the Pistons’ best players (18.1 points per game), will likely miss Sunday’s game with an ankle injury. Luke Kennard, who’s been out since December 23rd, will be out once again on Sunday. This means Detroit will likely start Brandon Knight, Svi Mykhailiuk, Tony Snell, John Henson, and Christian Wood.

Things are undoubtedly going poorly for the Pistons, who seem to be one of the only, if not the only team in the league that is more poorly prepared for the future than the Knicks.

That being said, here are three storylines to look out for in Sunday night’s game.

At this point, all Knicks fans (myself included) sound like a broken record. Mitchell Robinson is a special young talent and needs to play more than his average of 23.0 minutes per game.

In Robinson’s last three games, he’s averaging 15.3 points, 9.0 rebounds, and 1.7 blocks. This includes last week’s game against the Bulls where Robinson scored a career-best 23 points and grabbed 10 boards. One of the more encouraging parts of these last three games is that over this span, Robinson is only averaging 2.3 fouls per game.

If Robinson’s foul problem is more than on its way to being corrected, why keep bringing him off the bench in favor of Taj Gibson? That will remain a mystery, but at least if the Knicks want to start Gibson, they need to increase Robinson’s minutes on a nightly basis.

In my opinion, Damyean Dotson has been one of the Knicks’ most encouraging players this season. The 2017 second-round pick is shooting 36.2% from beyond the arc, and appears to have a future in the NBA as a role player.

However, the Knicks decided to give him zero minutes of playing time in five of the last six games. The only reason he played on Friday night is because of the blowout.

Considering that the Knicks have trouble with spacing due to the lack of shooters, there’s no excuse for Dotson’s bench warming. It’s time for him to get back into the nightly rotation.

This is going to be a storyline for the rest of the season. R.J. Barrett has improved tremendously from his midseason struggles, and appears to have turned over a new leaf in terms of efficiency.

Mike Miller needs to continue to run much of the offense through Barrett in order for this to continue. It would also be ideal to see Mitchell Robinson play as many minutes possibly with Barrett as possible. Not only is the duo the two most important pieces of the rebuild, but good things happen when they’re on the floor together.