Knicks Look to Get in the Win Column Against Refurbished Rockets 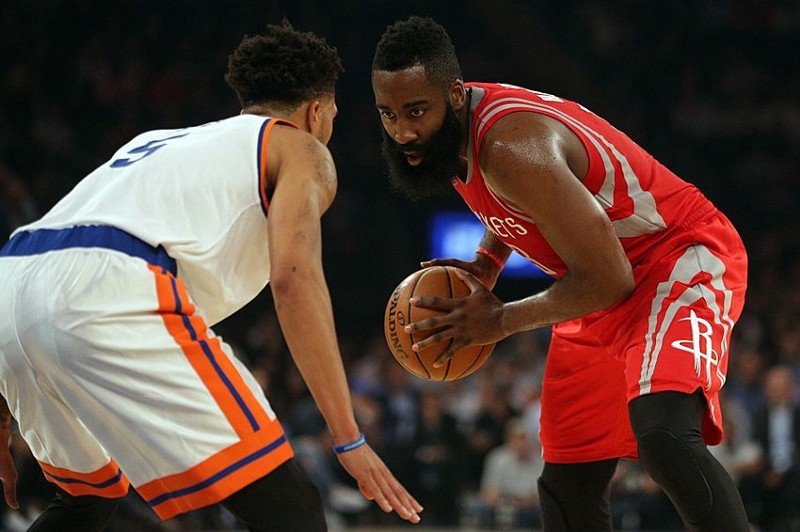 Does Daryl Morey’s squad have an ax to grind over spoiled Melo trade talks?

Real basketball is on the horizon. For now, we have the preseason, which is not a terrible alternative.

The new look Rockets come to town with a 2–0 record against an 0–3 Knicks squad. In their two preseason games, the Rockets have taken down the Shanghai Sharks and the revamped Oklahoma City Thunder.

In that game against OKC, Chris Paul and James Harden played well into the second half as they continue to get on the same page in Mike D’Antoni’s offense. If they are given the same chunk of minutes, it could spell trouble for the struggling Knicks.

Thus far, the preseason has been an indicator of what we should expect to see this season from New York: a lot of losing. Frank Ntilikina has played in one game due to an ailing knee, and he might not play again until opening night. If he were able to go tonight, it would have been a great chance to get schooled by the Paul, otherwise known as the Point God.

What should we be looking for in one of their final tune up games?

Jeff Hornacek has mixed and matched lineups through the first three games, but now he has to start getting his rotation down. Willy Hernangómezstarted for the first time this preseason against the Nets, responding strongly with 17 points and 12 boards. He should be the starter, as if that weren’t obvious enough.

The less obvious answer is the rest of the rotation. Kristaps Porzingis, who is likely not playing tonight after leaving Sunday night’s game early with a sore hip, is locked in next to Willy as a starter. Tim Hardaway Jr. is locked in at the two, and Ntilikina should start at the point. As for small forward? Your guess is as good as mine.

Courtney Lee is the clubhouse leader to win the job. He’s been one of the lone bright spots in the preseason, lighting it up from three to the tune of a 63.6 percent clip. Having a spot-up shooter at the three would be ideal, given that Porzingis, Ntilikina, and Hardaway Jr. figure to have the ball in their hands a lot.

Other names in the mix are Doug McDermott and Michael Beasley. McDermott had a solid outing (nine points on 3-of-5 shooting) in his start. He could sneak into the starting role given his age and size. He will always bring the effort, which could give Hornacek a reason to throw the young gun a bone. McDermott can shoot with the best of them and even showed some driving ability in the opening preseason game. Don’t rule out Dougie McBuckets.

The fun choice is the walking bucket, Michael Beasley. He’s out of his mind and we all love him for it. However, to come back to reality, do we really want Beasley hindering Porzingis’ shots by chucking for 30 minutes? In his start he scored seven points on 3-of-10 shooting, but did pull down eight boards. If the coaching staff believes that his shot attempts can be controlled, he could land the gig. The problem is controlling Beasley is like controlling a wild dragon.

Hornacek will tip his hand as to who he believes should start tonight. Each option has its perks, but as with everything from here on out, the top choice will be the one that optimizes Porzingis.

Not much is known about the bench unit. With Ntilikina out for two of the first three contests, Ramon Sessions and Jarrett Jack have each started. Sessions will likely get the start Monday and be the incumbent starter during the season. Lance Thomas is the unofficial captain of the second unit, but after that, much remains to be seen.

Enes Kanter and Kyle O’Quinn figure to be the backup bigs. Depending on who wins the small forward job, the loser will likely fill in there. The end of the bench is where Hornacek needs to figure out how to fit the pieces. Will Damyean Dotson prove he deserves minutes? What about Jack, who is on a partially guaranteed deal? Time is running out for Hornacek and his peers to lock in a rotation.

Porzingis is not the only guy with a lot of weight on his shoulders. The Knicks gave Hardaway Jr. the bag this offseason. His offense has been there through three games, as has his proficiency in the open court:

What’s not been there has been his defense. He has struggled through his first few opportunities in his second turn as Knick, with his biggest challenge yet looming: James Harden. Assuming Harden is in, Hardaway Jr. will have his hands full with the best in the business at his respective position. Facing Harden in a no stakes game is the perfect practice for someone that needs to improve on defense. Hardaway Jr. noted after the loss to Brooklyn on Sunday night that the whole team has to step up their effort on the defensive end of the floor:

“Just the grit. Brooklyn came out today and played with the grit … we played with occasionally here and there but for the most part we didn’t do it. We have to do a better job one on one defensively, as a team. If we could stay in front of our guys and not really rely on everyone trying to help one another out there, unless we have to, I think we’ll be able to key in and win ball games.”

On offense, THJ will have a great chance to take it to Harden. Considering that Porzingis is going to get the lion’s share of the opposing team’s attention, it will behoove the Knicks for Hardaway Jr. to deviate some of that focus his way. He has been good in transition and from deep, which is exactly what Steve Mills was hoping to see after tossing him $71 million.

A good showing against Harden won’t change the course of the season, but it can serve as an affirmation the team made the right choice in bringing Hardaway Jr. back into the fold as a building block.