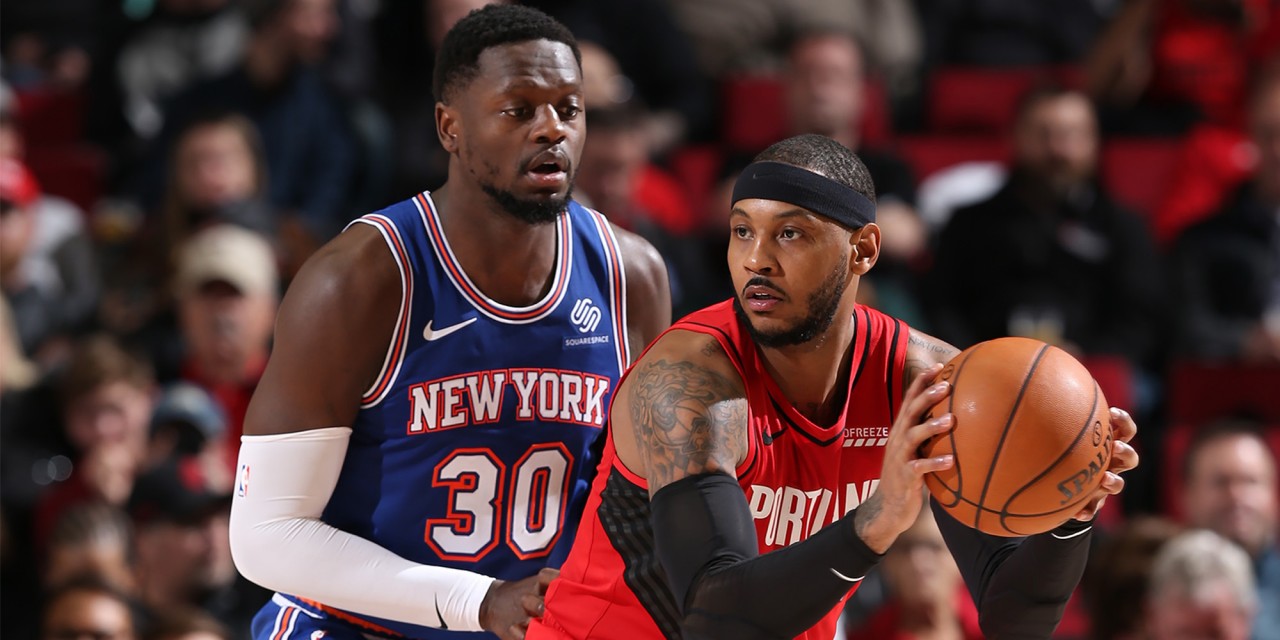 The Knicks look to win their third straight against Carmelo Anthony and the visiting Portland Trail Blazers on New Year’s Day.

There’s no doubt the Trail Blazers will be a tougher test than the Knicks’ past two games against the injury-plagued Brooklyn Nets and Washington Wizards, but this is still a winnable game for New York.

Portland is on a major skid of their own, as the Blazers have lost four consecutive games against the Pelicans, Jazz, Lakers, and Suns. It’s been nothing short of a disaster for Portland, who currently sit at the ninth seed in the West after playing in the conference finals last season.

This will be the second and final time the Knicks play the Blazers this season; the teams’ first meeting came in Portland on December 10th. The Knicks were dismantled in that game by 28. However, things have changed for Mike Miller’s squad since that meeting: the Knicks are 5-4 in the nine games since.

Despite the Knicks playing decent basketball lately, they’ll still have their hands full dealing with a top-three backcourt in the NBA in Damian Lillard and C.J McCollum. Lillard is on pace to make his fifth All-Star game in eight seasons in the NBA, and is averaging 27.2 points per game, a career-high. He also torched the Knicks in the December 10th meeting, scoring 31 points on 9-of-15 from the field. McCollum is averaging 22.4 points a game on the season as well.

To dive a bit deeper, here are three additional things to look out for in tonight’s game.

The Beginning of a New Chapter for Julius Randle?

Everyone knows that it hasn’t been a good year by any means for Julius Randle. For almost the entire season, he’s been forcing bad shots and turning the ball over way too much. Fizdale was using Randle as a point forward, and it became evident quickly that it wasn’t meant to be. Shortly into Mike Miller’s tenure, this has faded, and Randle is playing light years better than he was before. In the Knicks’ last three games, Randle is averaging 32.7 points, 9.7 rebounds, 3.3 assists, shooting 52.9% from the field, and 47.8% from three.

Per @bball_ref,
Randle is the first player in Knicks franchise history with at least 30 points, 15 boards, five dimes and two made treys in a single game.

Is it sustainable? On a level as high as this, it’s not, but it’s certainly possible that Randle can play at the level he was supposed to when the Knicks signed him. That would be massive for this team.

As for Randle’s defense, he’s still a liability, but that was a known flaw when he signed.

The Trail Blazers can’t defend. It’s as simple as that. They’re allowing 118.3 points a game over their four-game losing streak, and rank 22nd in the NBA allowing 114.0 points per game. On December 10th, the Knicks only shot 35% and put up only 87 points against this team. Playing much worse than that is going to be hard to do, and if the Knicks can shoot decently, expect them to put up a lot of points.

Carmelo Anthony Returns to the Garden

Who could forget? This will be Carmelo Anthony’s second game at Madison Square Garden since his career with the Knicks concluded, and first since he was a member of the Oklahoma City Thunder on December 16, 2017. Anthony is averaging 15.7 points on 40.7% shooting from the field and 38.9% from three this season. He’s nowhere near his old self, but is helping the Blazers more than many thought he would while showing he still belongs in the NBA. If you tried to buy tickets to this game, it’s the reason you can’t find anything under $200 per seat.

After being sidelined the whole season to this point with cervical disc herniation, Reggie Bullock is set to make his Knicks debut tonight. Furthermore, Frank Ntilikina (sore groin), Damyean Dotson (sore lower back), and Dennis Smith Jr. (strained oblique), are all questionable, per Knicks PR.