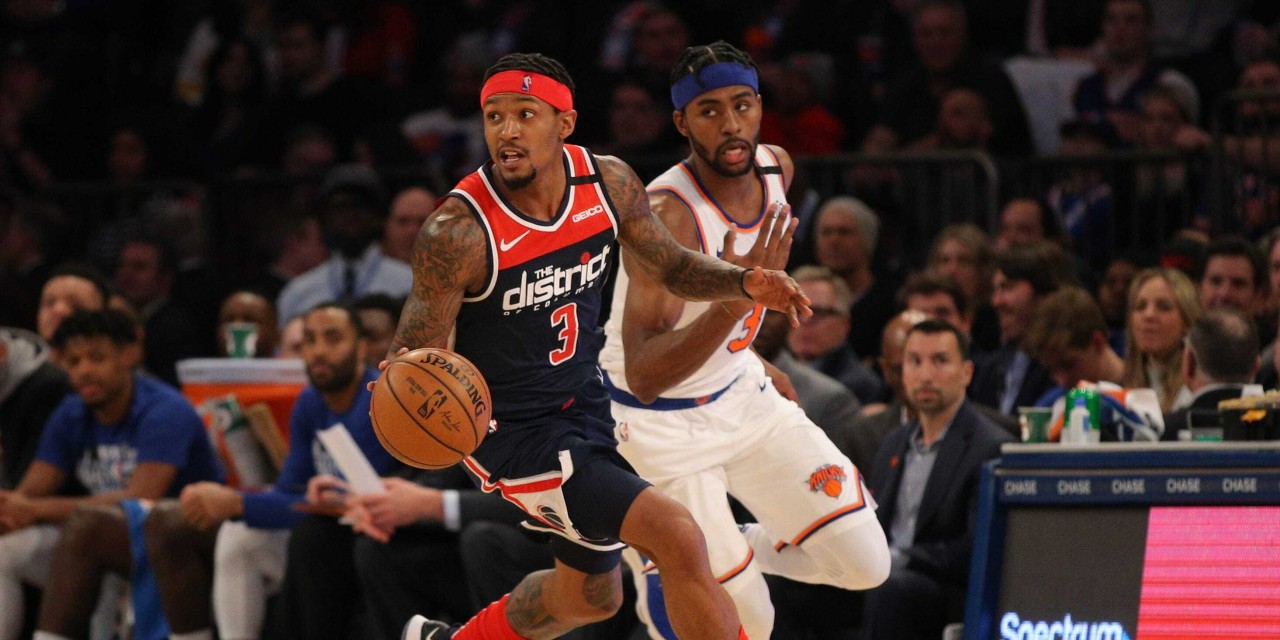 The Knicks collapsed in the fourth quarter with porous defense, leading to Bradley Beal and the Wizards claiming a pre-All-Star break win.

The New York Knicks (17-38) turned in a two-game losing streak just before the All-Star break, losing to the Washington Wizards (20-33) 114-96 on Wednesday night. The Knicks had their worst three-point shooting performance of the season, shooting 3-of-23 (a clip of 9.1%) from beyond the arc.

This game was sloppy from tip-off. Both teams combined for four points in the first two minutes of the game and each shot 4-of-12 from the field roughly six minutes in. The Knicks’ ball security was atrocious throughout the opening period; they committed eight turnovers (27 over the entire game). Luckily, they found themselves down by just one point at the quarter’s end.

The beginning of the second quarter was a track meet. Both teams looked to push the pace offensively, but neither could pull ahead very far. Washington held the lead for most of the quarter with its biggest lead being just six points.

New York held the lead for sevens seconds earlier in the second quarter and took it back with a minute left in the half off of a sweet finish from R.J. Barrett, which also made him the first ‘Bocker to reach double-digit points.

New York led 50-46 entering the second half. The Wizards opened the half up with an 11-3 run, taking the lead in fewer than three minutes and later going up by as much as seven points. A balanced Knicks attack kept New York from sinking too far in the third quarter.

The score read 77-73 in favor of Washington to begin the fourth quarter. The Knicks hurt their chances of coming back by committing four fouls in the first 90 seconds of the final period, two of which were shooting fouls committed by Kevin Knox.

The Wizards took an eight-point lead with 7:59 left in the game, the largest lead of the game, prompting a Mike Miller time out. From there, things only got worse. D.C.’s lead grew as the game came closer to the end as they outscored the Knicks 37-23 in the final period.

New York was led in scoring by Julius Randle, who recorded 21 points and 13 rebounds on 9-of-18 shooting. Eflrid Payton tallied 19 points, eight assists, and five steals on 6-for-10 shooting.

Harkless recorded his first bucket as a Knick on a jumper to start the second quarter. He then came back and score again on a nifty move inside. The 6-foot-9 forward showed solid defense and hustle.

Mitchell Robinson had a field day against the weak Washington big men. He looked like a man amongst boys on the boards, bringing down seven rebounds in the first half to go along with seven points.

The only one who could stop Robinson tonight was himself. In typical MitchRob fashion, he was very prone to fouling. He recorded four in his first 13 minutes. He committed his fifth foul as soon as he checked into the game in the fourth quarter, sending him right back to the bench.

Robinson checked back in later in the quarter, but the game had been decided by then. He finished with 11 points and eight rebounds on 5-of-6 shooting in 18 minutes.

First, Zarba T’d up Mitchell Robinson midway through the third quarter for complaining about a call. Then, at the quarter’s end, Zarba issued double-technicals to Julius Randle and Moritz Wagner after Randle confronted Wagner for a loose ball foul that tied him up with Bobby Portis.

Shortly after that, Zarba gave Portis a technical foul and ejected him for throwing a ball in the direction of Shabazz Napier.

Bobby did us all a favor and excused himself from the remainder of tonight’s game pic.twitter.com/ruQxygTEm7

Zarba then gave techs to Wagner and Payton after they each complained about fouls called against them, making six technical fouls in the span of about 10 minutes of game time.

The Knicks are now off until the All-Star break ends. They return to action Friday the 21st against the Indiana Pacers at the Garden.

»READ: How will the Knicks rotation look after the trade deadline

»READ: Breaking down the move—and non-move—of the Knicks’ trade deadline