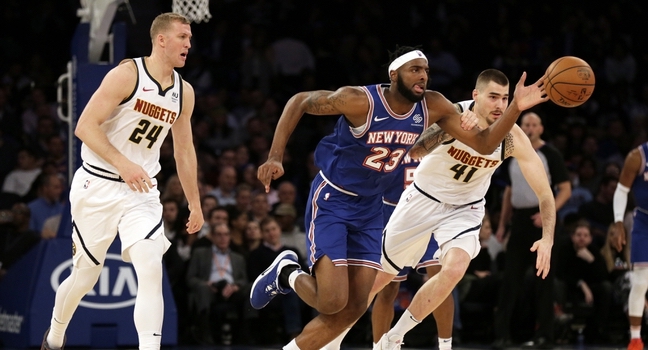 The Knicks couldn’t withstand the balanced attack of the Nuggets on Thursday night, led by Nikola Jokic’s effervescent passing at center.

NEW YORK — The New York Knicks welcomed the third-place Denver Nuggets of the Western Conference on Thursday night, failing to stop the bleeding in a now-eight-game losing streak. Despite reinforcements in the form the healthy returns of Marcus Morris, Frank Ntilikina, and—surprisingly!—Elfrid Payton, the Knicks fell to one of the NBA’s best defenses, with the very deep Nuggets staving off the home team to cruise to a 129-92 victory.

All-Star center Nikola Jokic hasn’t exactly been the same this season, but his passing skills remain intact. The Serbian big man was the primary playmaker for the Nuggets on Thursday, dishing off to (often) wide-open wings at the three-point line. The Knicks frequently found themselves in trouble with off-ball screens, which cleared Denver’s wing players to launch from deep.

This included brother of former Spanish ‘Bocker Willy Hernangómez, Juancho, who delivered three triples by halftime and finished with 12 points and four made threes, Will Barton (4-for-4 from long range), and three from Malik Beasley. The Nuggets shot 56% from the field, knocking down 21 triples altogether on 53.8% from deep, punishing the ill-equipped defensive rotation from the Knicks.

A seemingly innocuous-at-first hamstring strain knocked out sixth-year veteran point guard Elfrid Payton after four games with the Knicks, having signed with New York this past offseason. Payton, 25, returned off the bench on Thursday in his first game in six weeks, totaling four points, two rebounds, two assists, and four turnovers in 11 minutes of play.

Payton played a considerable amount of his minutes beside Dennis Smith Jr. in the backcourt, a strange combination given the Knicks aren’t lacking in wing players needing playing time, such as Allonzo Trier, Damyean Dotson, and Wayne Ellington.

Rookie shooting guard R.J. Barrett has struggled in recent games—coinciding with the Knicks’ seven-game skid, although there is more at play than just the performance of a neophyte. In the Denver defeat, the Duke product was more aggressive than the past week or so, getting involved early and often with his wingspan on defense or ball-handling in the halfcourt, which led to dishing and his own buckets.

Before Thursday’s matchup, in the past five games Barrett had been averaging 13.0 points, 4.0 rebounds, and 2.2 assists a contest, with a 36.5 field-goal percentage and just 18.8% from deep.

Barrett couldn’t exactly shake off his cold spell against the contending-hopeful Nuggets, but he did look his old self besides multiple missed shots from deep. For now the first-year Canadian wing looks to be on the right track to return to his early-season form.

The Knicks remain home for a Saturday night matchup with the Indiana Pacers before heading on a West Coast road trip, which includes a rematch with the Nuggets in the Mile High City in 10 days.