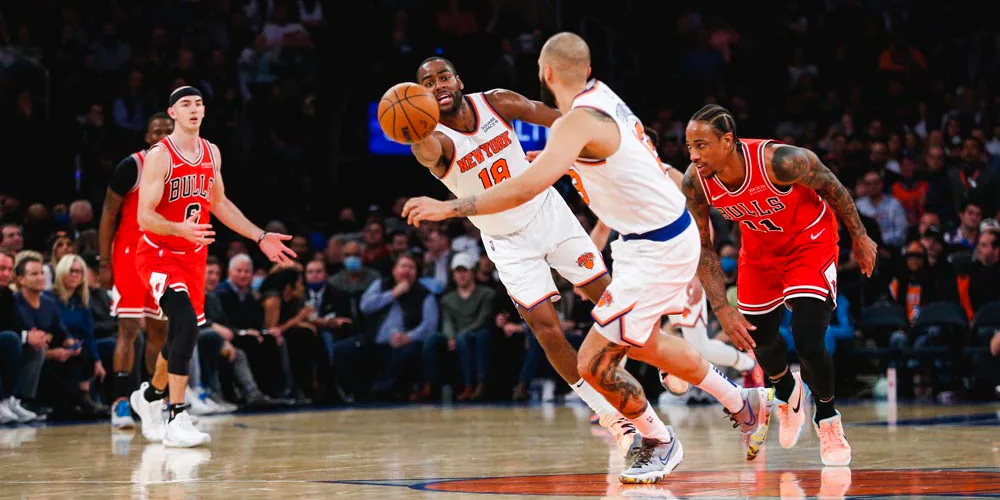 The Knicks regained their composure in the second half, coming back after being down as much as 21, but lost to the Bulls for a second time.

The New York Knicks (11-11) lost their second straight game to Chicago Bulls (15-8) by a score of 119-115. New York looked out of sorts in the first quarter—highlighted by Taj Gibson’s early ejection—and found themselves down 18 points. Their second-half surge was a valiant effort, but it was simply not enough against a very good Bulls squad, who absolutely tormented the Knicks this evening, especially with clutch buckets.

Chicago’s Big 3 of DeMar DeRozan, Zach LaVine, and Nikola Vucevic was outstanding this evening scoring a combined of 88 points, per ESPN Stats. No other player scored in double-figures for the Bulls, but that wasn’t an issue tonight as the trio shouldered a great majority of the offensive load.

The Knicks had no answer for the Bulls’ high-powered offense in an uncharacteristically bad defensive showing for a Tom Thibodeau–coached team. Chicago didn’t shoot the ball extremely well, but all they needed was some DeRozan fourth-quarter mid-range magic to power them to victory.

Over the last couple of games, the Knicks and the referees have not been exactly seeing eye-to-eye, and it seemed to have affected them at the beginning of this game.

Taj Gibson became unraveled and foolishly got himself tossed in a game where the Knicks could have used his energy and leadership. At the end of the last game, Julius Randle went at an official on multiple occasions as well. Sure, there have been some bad calls, but it seemed like the Knicks’ fixation on those bad calls has caused them to come apart a bit and lose focus, which gave the Bulls a nice cushion to begin the game.

A positive to draw from tonight’s game is the play from Alec Burks, Immanuel Quickley, and Derrick Rose. The point guard trio was very good this evening, scoring 47 points combined and it seems like the Knicks have found a successful formula in this department.

Despite a subpar shooting night, Alec Burks was productive in his second game since he was inserted into the Knicks’ starting lineup, to the tune of 16 points and seven rebounds. Although a small sample size, Burks thus far has done a good job in taking over for Kemba Walker and has made Thibs look very smart. Burks plays the game with a quiet confidence and gives the Knicks excellent size in the backcourt.

Quickley made some big buckets in the second half and has shown early in this season that he is not timid and is willing to take shots and play aggressive defense, while Derrick Rose continues to provide veteran leadership and solid play off of the bench.

Unfortunately for Walker, it looks like his time out of the rotation will be extended, given the fact that the Knicks have seemed to push the right buttons so far with their point guard shuffling.

Julius Randle seems to be back to his old self after a brief slump against the Phoenix Suns and Atlanta Hawks, where he uncharacteristically scored in single-digits. Following an impressive performance against the Brooklyn Nets, Randle put up 30 points, 12 rebounds, and six assists tonight against the Bulls.

You could tell that Julius played angry tonight and while that is not always a good thing for everyone, he seems to thrive off of being slighted and seemed to channel his anger from after the Nets game into the Bulls game. Hopefully, this is the beginning of a hot streak for big no. 30.

The Knicks are back in action on Saturday afternoon when they host Nikola Jokic and the equally struggling Denver Nuggets.