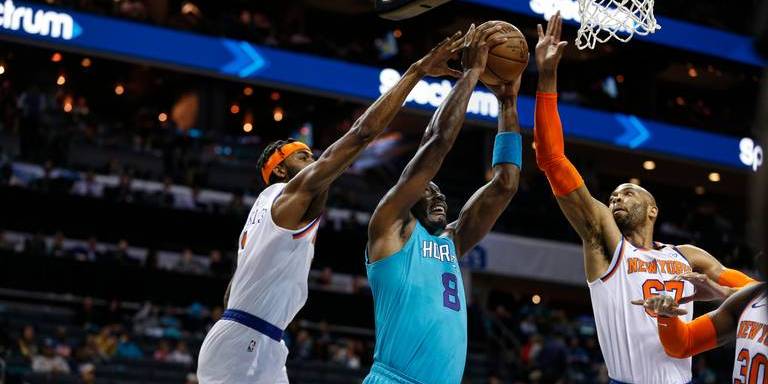 The Knicks mounted a fourth-quarter comeback that fell short to Terry Rozier and the Hornets, making it five straight losses for New York.

The New York Knicks (17-41) lost to the Charlotte Hornets (20-38) by a score of 107-101. In typical Knicks fashion, they stayed within striking distance the entire game just to lead a failed comeback in the fourth quarter.

We have officially entered the dog days of the season. There is no better way to celebrate that than enjoying a Knicks-Hornets game on a Wednesday night. Both teams currently occupy bottom spots in the Eastern Conference, with their hopes locked up in the summer’s draft lottery. The post–All-Star Game Knicks look very similar to the team before it, minus Marcus Morris, plus a little Maurice Harkless now sprinkled in. The team is still rolling with starting Taj Gibson over Mitchell Robinson, and allowing Elfrid Payton to run the offense from the point.

Both the Knicks and Hornets rank in the bottom five for teams’ per game scoring output. The Knicks struggled massively to find consistent buckets against Charlotte, which might be related to Damyean Dotson getting a whopping zero minutes and the team attempting only 15 threes by the final sound of the buzzer. New York relied heavily on points from Bobby Portis, who had 17 on 11 shots, and Julius Randle, who had 18 points on 14 shots.

The Knicks trailed the entire game by a decent margin, and up until Allonzo Trier entered in the fourth quarter, scoring was slow and sparse. Trier injected offense into the Knicks, hitting difficult shots at the rim and scoring 15 points on eight shots and leading a comeback that brought the Knicks within two points with just a minute left. Sadly, the comeback attempt came up short.

The Knicks’ defense was diced up tonight by the performances of Devonte’ Graham and Terry Rozier. Athletic guards who can drain it from three typically give the Knicks a headache, and tonight was no different. Graham’s bounce off the dribble and ability to find open men in tight passing lanes proves his elite court vision, and his rise at lead guard this season has been exciting to watch. Graham had 21 points on 18 shots with five assists, and Rozier had 26 points on 15 shots, hitting four three-pointers.

When rookie R.J. Barrett’s shots aren’t going in to start the game, he has difficulty getting out of that funk. His attempts at the rim end up being forced, and he takes jump shots where he’s too heavily guarded to get a decent release off. He shot 0-for-6 in the first half of the game, and finished playing just 21 minutes with five points on 11 shots.

The DSJ We All Want To See

Smith Jr. is showing some signs of life. Coming off a stellar performance last game against Houston, he’s looking more like the player the Knicks initially traded for in the infamous Kristaps Porzingis trade last February. When DSJ is attacking the rim and playing with confidence it’s encouraging to watch, and maybe playing in his home state of North Carolina put some pep in his step. Even if his shots aren’t all falling, I think at this point we just want to see him play with purpose. He isn’t going to be able to play at a level that erases the terrible performance he’s had this season, but the Knicks need him to look alive on both ends of the floor, and at least we’re seeing that. He finished with nine points on 4-of-12 from the field along with three assists.

Mitch is just dominating both ends of the floor.

He had a handful of impressive put-back dunks tonight, and none of the Hornets’ big men could handle his length or leaping ability. Robinson’s galloping ability down the floor to catch and slam lobs was on full display, and he finished with 12 points, 15 rebounds, three blocks and a steal.

The Knicks head to Philly, who just lost to the Cavs, tomorrow night for their second night of the back to back.