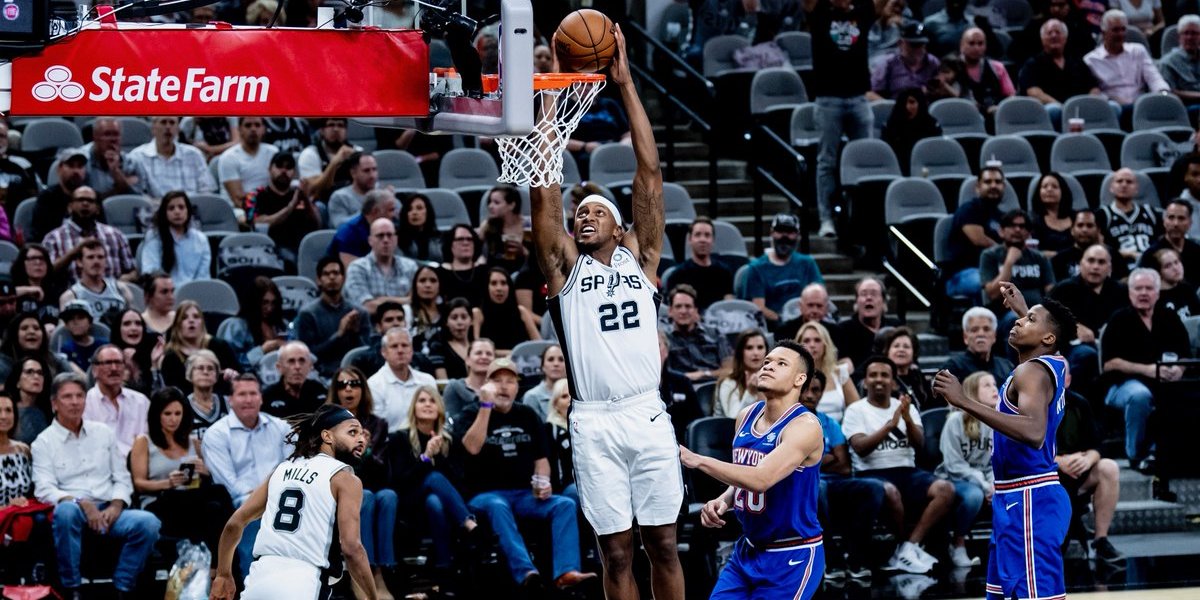 The Knicks briefly led after three quarters but were devastated by an 18-0 fourth-quarter run by the Spurs, dropping them to 0-1 on the season.

For a moment, it looked like the new-look New York Knicks would be able to pull one out on the road and beat the San Antonio Spurs. However, an unfortunate series of events for the Knicks late in the fourth quarter—a 18-0 San Antonio run, a brief injury spell for Julius Randle, and cold shooting—allowed the Spurs to pull away and win the season-opener, 120-111.

Despite a number of New York’s newcomers impressing in their official debuts, the Knicks fell short at the end.

Marcus Morris led the way with a game-high 26 points. Before exiting midway through the fourth quarter, Randle had 25 points, 11 rebounds, six assists, and three steals. Rookie R.J. Barrett did a little of everything in his first real NBA game, scoring 21 points on an efficient 9-of-13 shooting performance. He also had five boards, two assists, and a pair of steals.

For the Spurs, Bryn Forbes heated up from long range, knocking down a couple of three-pointers during San Antonio’s decisive late-game run. He finished with 20 points. LaMarcus Aldridge had 22 points and eight rebounds. Meanwhile, Dejounte Murray chipped in 18 points, eight boards, six assists, and three steals.

The Knicks overcame a slow start, where they shot an ugly 6-of-22 in the first quarter. They would eventually regroup, trailing 59-51 at the half. A solid defensive series fueled a third-quarter run that allowed New York to pull ahead. The Knicks held the lead until the 6:31 mark of the fourth quarter, when the Spurs would go on the game-changing run to win the first regular-season game for both teams on Wednesday.

Whatever that opening lineup was, it’s safe to say that shouldn’t be a go-to combination. The Knicks trotted out Allonzo Trier, Bobby Portis, Marcus Morris, Julius Randle, and R.J. Barrett at the point. Sure, even if Fizdale is playing Barrett “every day in practice” at the point, he’s not ready to take that responsibility on full-time—or at the very least, he’s better served off the ball.

The offense early on was sloppy, had very little ball movement, and desperately needed playmakers. Defensively, they allowed the Spurs to do almost whatever they wanted to start.

After falling into an early deficit, Fizdale switched things up and inserted Dennis Smith Jr., who only added to the Knicks’ problems. He couldn’t create, didn’t make any shots, and got torched on defense.

However, the game gave a glimpse into the pecking order of backcourt play, and it’s clear that Frank Ntilikina is still in the doghouse. Ntilikina played only three minutes, despite the Knicks’ early struggles defensively and their need for a playmaker. It looks like Ntilikina is glued to the bench with third-year swingman Damyean Dotson, who didn’t play at all.

Fizdale did show that Elfrid Payton is valued higher in the depth chart, and he might see more minutes come his way. Payton, 25, left his mark defensively (five steals) and with his success to dish out eight assists and have zero turnovers, it was clear that he can be someone to trust. Payton helped spark the Knicks’ third-quarter comeback and gave them a chance at winning the game. When Payton hit foul trouble the Knicks’ offense went stagnant once again and couldn’t keep up with the Spurs’ 18-0 run.

Welcome to the Knicks!

It’s one thing if it’s preseason, but another once the bright lights are on. R.J. Barrett made a firm first impression with the way he was able to barrel his way inside and finish at the basket. He flourished on the floor and did a little of everything, when it came to rebounding and defending. It’s a long season, so we’ll have to see how much he can sustain that play, but a good start so far nonetheless.

Randle quietly had a solid night. There were a few questionable fouls and defensive lapses, but once he got going, he was a major piece to the Knicks’ success. He was an anchor in the post, and once he exited the floor, his absence was felt. He will have to improve his conditioning, because the Knicks can’t afford to lose him in pivotal moments due to cramping.

Morris and Payton also impressed. Payton was a spark plug off the bench and his team-high plus/minus rating of +14 doesn’t even begin to tell the full tale. He was disruptive on defense and added the much-needed playmaker element on the court. Morris went cold at the end, but that shouldn’t take away from his solid scoring night.

The Knicks continue their short road trip by returning to New York—but to face the Brooklyn Nets after Kyrie Irving scored 50 points in his debut, a home overtime loss to the Minnesota Timberwolves.