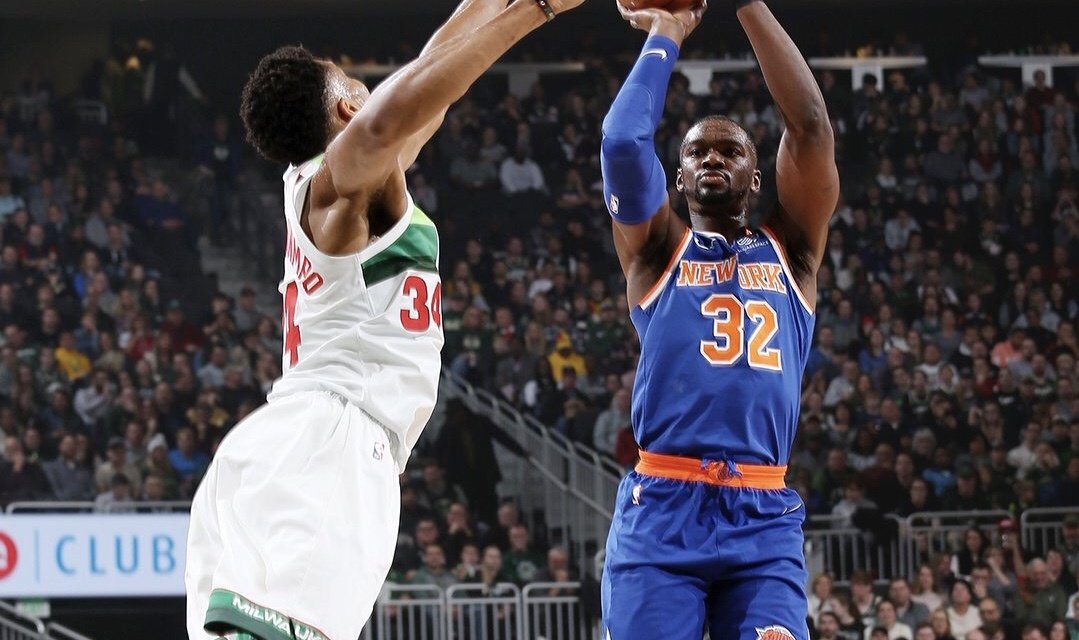 Despite a good showing from Noah Vonleh and a career night for Luke Kornet, the Knicks fail to topple the second-place Milwaukee Bucks in their fourth and final meeting this season.

After getting beat at home on Christmas Day by the Milwaukee Bucks, the New York Knicks headed to Brew Town with hopes that a rubber match would yield a different ending. However, the Bucks (24-10) came out on top once again, besting the Knicks 112-96 in their regular season series finale.

From opening tip off, it seemed like it would be the Knicks’ day. Offensively, the Knicks (9-27) were getting their shots to fall. On the other end of the court, Noah Vonleh set the tone on defense with a block on Giannis Antetokounmpo within the first few plays of the game.

Unfortunately for the Knicks, things changed in the second quarter. At one point, they were leading by as much as 10. Suddenly, in a flash, Milwaukee went on a 27-9 run that lasted just over eight minutes, catapulting the Bucks in front of the Knicks before halftime. New York would recover in the closing minutes of the second quarter, thanks to a Noah Vonleh putback slam and a Kevin Knox mid-range jumper to finish the first half. Milwaukee took a 53-48 lead going into the break.

In the third quarter, there were a few instances in which the Knicks were able to trim down the Bucks’ lead to as low as one point. That was the closest New York ever got to catching Milwaukee, as the Bucks made the necessary shots to keep the Knicks at bay for the remainder of the game.

Giannis Antetokounmpo tormented New York in every meeting this season. However, for a majority of the game, Vonleh had the Greek Freak’s number with another relentless defensive effort. He was held to just seven points in the first half, but his slow start paved the way for a couple of other Bucks to step up.

Khris Middleton was consistently good offensively throughout the game, and he didn’t even have to make an impact from the three-point line. He finished with 25 points on an efficient 9-for-14 performance inside the arc.

Brook Lopez also chipped in 17 points, and made three shots from long range.

Antetokounmpo finally came alive in the second half, although Vonleh still didn’t make it easy for him. Once he got going, the Bucks eventually pulled away. His final stat line—31 points, 14 rebounds, eight assists, and four blocks—won’t show the fine effort that Vonleh made in keeping the Knicks in the game for about three quarters by slowing down the Greek Freak.

David Fizdale shook up the Knicks starting five once again. With Tim Hardaway Jr. ruled out hours before tip off with an illness, Fizdale surprised by having Courtney Lee taking his spot. He also opted for Luke Kornet over Enes Kanter, a decision that didn’t seem to please the 6-foot-11 Turk.

Lee hit a few shots early to help the Knicks take the lead before disappearing for the rest of the game and finishing with a quiet nine points. Still, Lee’s presence did allow the Knicks to have some crisp ball movement early as the ball-dominant Hardaway was unavailable.

As for Kornet, he eclipsed the guy he replaced in the starting lineup. With his shooting ability, he spread the floor and created more spacing. It also helped that he was cashing in on his shots. In his second career start, Kornet led the Knicks with a team-high 23 points, including a blistering 7-for-11 performance from long range.

Meanwhile, Kanter had just eight points and five rebounds off the bench, before finishing his night with some controversy and an ejection.

New York will continue its road trip, venturing into Utah for a Saturday night game against the Jazz. Tip off is scheduled for 8 p.m. EST.