Knicks Fall To Mavs at MSG In Battle of Futility 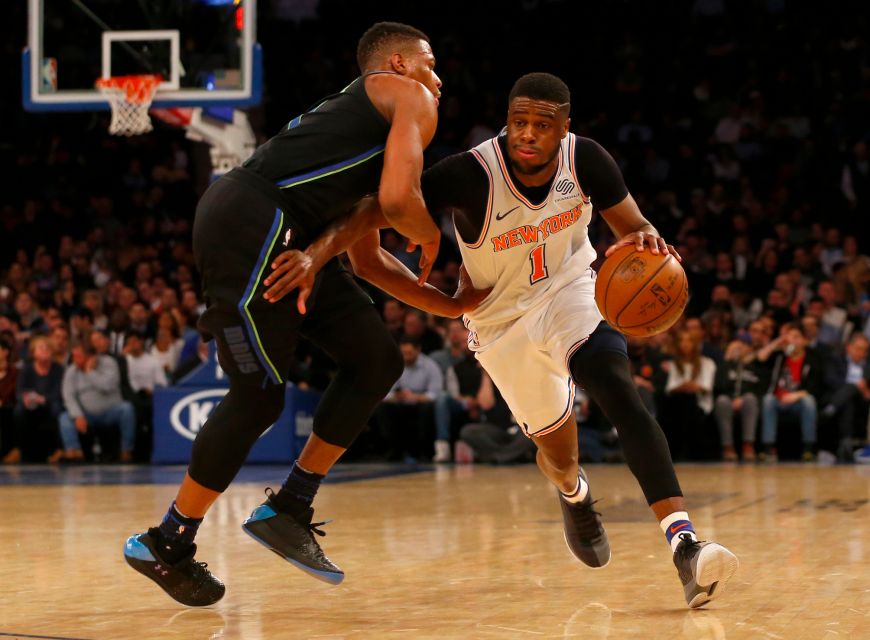 The Knicks increased their chances of moving down the standings on Tuesday night by losing to the Dallas Mavericks at home.

An old Dirk Nowitzki, an inefficient Dennis Smith Jr. and no Wes Matthews? No sweat for the Dallas Mavericks.

They took care of business tonight in a matchup of two teams with their sights (and seemingly their priorities) set on the upcoming draft lottery. The Mavs, led by Harrison Barnes’ 30 points, used a 19-0 run in the third quarter to springboard themselves far enough ahead to hold on for a 110-97 victory in the Big Apple. Dallas was 27th in points per game coming into the night, and they were able to do whatever they desired throughout the game offensively to the tune of 14 threes in another pathetic defensive showing from the Knicks. Once again, the Knicks looked one step slower than their opponent, and the lackadaisical performance yielded the results you would expect. Having KP in attendance tonight didn’t motivate the Knicks like you think it would.

Nevertheless, the tanks continues to roll on and gain some serious momentum. The loss marks the Knicks’ eighth straight and drops them even further into the deep, dark depths of the cellar in the NBA standings.

Offensively, Michael Beasley showed off how talented a player he is with his extraordinarily efficient 10-13 from the field. Beas continues to have a nice season, and even though he makes you want to rip your hair out sometime, he just goes out there and competes and plays basketball, which is all you can ask from him at this point.

• Frank Ntilikina was okay tonight and had some flashes of great promise coupled with moments that made you cringe. His six assists in the first half are something to be encouraged about, but he continues to struggle mightily with his shot. Having him directly juxtaposed against fellow rookie point guard Dennis Smith Jr., a player that the Knicks could’ve drafted, didn’t bode incredibly well for Frank as DSJ has had a better first year than Ntilikina. Frank is only 19 though, and all we can ask for is for him to compete hard, especially defensively, which he usually does. I’m confident the improvement will come with time.

• Emmanuel Mudiay, like Ntilikina, was average tonight, and has been very ordinary since his time in a  Knick uniform. He was 4-of-9 from the field, good for 10 points and a couple of assists. Mudiay wasn’t awful, but damn, you would love to see more from a guy who was taken seventh overall just three years ago. Mudiay isn’t a very good shooter, which is a huge disadvantage for a guard in today’s NBA. However, he is still young as well, just turning 22 earlier this month, and still has time to make strides before we can definitively say he’s a bust. You love Mudiay’s energy and his hustle, but he simply just needs to contribute more offensively for him to be a mainstay during this Knicks rebuild.

• Trey Burke, after putting up a goose egg in the first half, came out firing in the second half with 16 points. Burke was accurate from the field in his 15 minutes of play and was active defensively as the Knicks made a late run to cut the Mavs lead to four:

Burke converts off the turnover

I’ve always loved Burke as a player and always believed he has that “it” factor that you need to be good in the clutch. Although he has limitations, Burke has proven he belongs in the pros and has earned the right to get more minutes than he received tonight.

The Knickerbockers are back in action Thursday against Ben Simmons, Joel Embiid, and the Philadelphia 76ers.