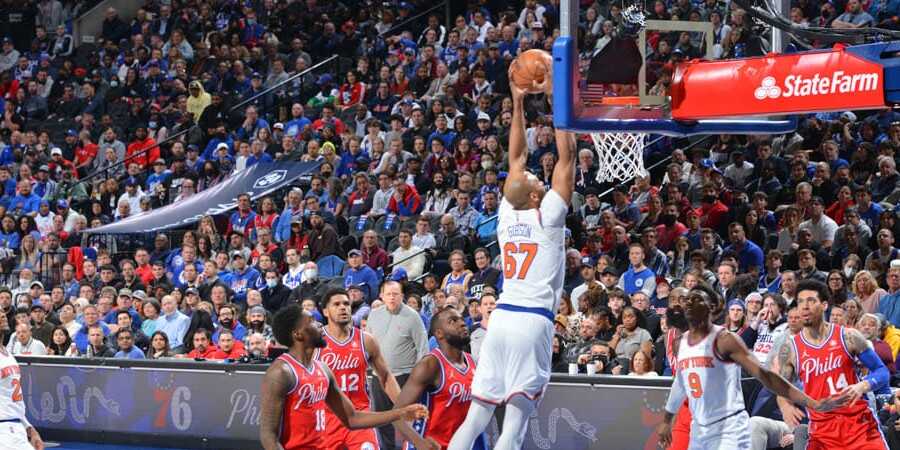 The Knicks drop yet another encouraging halftime lead in the second of back-to-back losses against the Sixers.

It was a tale of two halves in Philadelphia. In what felt like a poor remake of a Rocky storyline, the New York Knicks (25-36) seemed poised to pound the Philadelphia 76ers (37-23). The Knicks led by as much as 16 points in the first half. Then, with their backs against the ropes, the Sixers whooped the Knicks in the second half to beat them 123-108. The loss gave the Sixers a clean sweep of the home-and-home and make it six straight losses.

Early aggressiveness, led by RJ Barrett, helped the Knicks get off to a better start. Barrett got the proceedings started with a feed to Mitchell Robinson and added eight points. Julius Randle was the star of the quarter for New York, leading the way with 12 points. The Sixers kept it close with Joel Embiid’s free throw line visits and some timely three-pointers, but the Knicks ended the quarter with a 33-25 lead.

For a brief moment, it felt as if the Knicks could take the Sixers’ heart. Barrett and Cam Reddish looked good together for the second straight game. Barrett in particular scored 11 to head into halftime with a team-leading 19 points. The Sixers would not go away. James Harden had 19 points of his own, and the Knick starters outside of Randle and Barrett combined for eight points. Still, the Knick defense forced eight Sixers turnovers to keep the lead at the half.

Reality finally hit in the third quarter. The Knick defense could not stop a nosebleed, giving up 38 points. The offense stalled as Tom Thibodeau stuck with his usual playbook of running his starters late into the quarter, which meant the frostbit Alec Burks and Evan Fournier continued to brick shots.

By the time the fourth quarter rolled around, it was over. The Sixers outshot the Knicks from deep, with their new big three of Embiid, Harden and Tyrese Maxey combining for 78 points. For the Knicks, it was Barrett, Randle and not much else, and the result was a second half in which the Knicks were outscored 68-46.

Do not let the Alec Burks point guard drama hide the fact that Evan Fournier is officially blocking the Cam Reddish-RJ Barrett partnership from flourishing. Reddish continues to look good, while Fournier farts through another cold streak. And more than the cold shooting, that is understandable, is the shot selection from Fournier.

Reddish’s main flaw is his shot selection, but if it is not much worse than Fournier, why not at least give Reddish an even amount of minutes or more? The season is for all intents and purposes over, which means any Fournier minutes are largely fruitless.

Fournier went 0-4 with a single point in the first half. Reddish didn’t light the world on fire—scored five points on 2-of-3 shooting and pulled in a rebound—but the chemistry with Barrett is unmistakable.

Reddish’s ability to be a disruptor in the passing lane alone provides more value than Fournier’s hot and cold shooting with zero defense. Thibodeau played Fournier 27 minutes and got six points out of him and quite literally nothing else—okay, he had two steals, but you get the point.

The good news is Reddish logged 23 minutes and contributed seven points, along with a pair of rebounds, steals and assists. Maybe the agenda is already in motion.

Time for the TKW @PrizePicks of the Day 🔒

This combo was a lock last time out, so if it ain’t broke don’t fix it.

This was free money. James Harden was not going to flop in his Philly debut, and RJ Barrett is RJ Barrett.

Barrett put together a masterclass as his ascension to the top of the Knick food chain is complete. Barrett was the best scorer and playmaker for his team tonight, scoring 30 points to go along with seven assists and six assists.

TKW Highlight of the Night: RJ Barrett is Him

RJ Barrett’s leap is the only salvageable piece of this season, and the key to that leap was aggressiveness like this.

Life does not get easier for the Knicks as they head to Phoenix to dance with the league-best Suns.