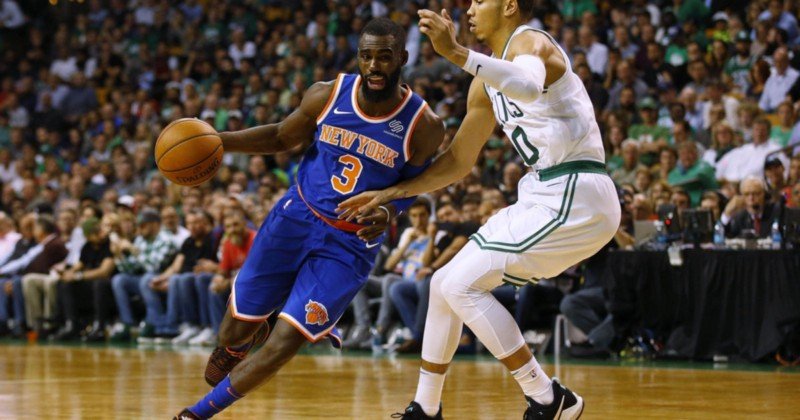 The Knicks have only played three games, but that won’t stop us from looking into the film for interesting tidbits.

Each week I’ll breakdown interesting things I see on film, respond to questions and ideas from people on Twitter, and hopefully, provide you with a unique perspective on the New York Knickerbockers. Please make sure to subscribe to our YouTube channel and follow Knicks Film School on Twitter.

Welcome back to TKW’s Knicks Film Study. We have a lot to cover this week, so let’s jump right into it!

Twitter Question: How have the Knicks defended the Pick-and-Roll, particularly on plays including Kristaps Porzingis?

Three games into the season, the Knicks rank 29th in defending the pick-and-roll ball-handler, something that can’t entirely be blamed on poor play, when you consider two of their first three opponents showcased the unstoppable Russell Westbrook and the nearly-unstoppable Kyrie Irving. On all pick-and-roll plays, including passes made to the roll man or to spot-up shooters, the Knicks defense ranks 28th, per tracking data compiled by Synergy Sports. These early season rankings are only slightly better than where they finished last season — 25th vs. PnR ball-handlers, and 19th vs all PnR derived plays.

After watching film of the first three games, the Knicks seem confused on pick-and-roll coverage. Without being in the pre-game meetings or sideline huddles, it’s impossible to know exactly where a coverage breaks down, where an assignment was botched. Did the screen defender miss the switch? Where they supposed to trap? Did the big man forget to drop and contain? As writers — or fans — we don’t know the Knicks game plan every night. But we do see the results, and it is pretty clear when a mistake, by somebody, is made.

For Kristaps Porzingis, his position on the court, starting at power forward, makes life difficult with poor defenders around him — particularly at center (Kanter) and point guard (Sessions). That partially explains the Unicorn’s 1.15 points allowed per play in defending the pick-and-roll. But Porzingis does not go without blame. As good as he has looked offensively (at least in the first two games), he has been very average on the defensive end. It is clear that he struggles with the push-and-pull of wanting to be a defender around the basket, while also being responsible in guarding his man along the perimeter, a problem all bigs are having in a stretch-happy league. High pick-and-rolls, early in the offense, have been effective in forcing Porzingis into a position on the court that minimizes his ability to roam and provide weakside help, his greatest strength.

Taking advantage of mismatches on offense

While Jeff Hornacek claims the Knicks ran “95 percent” of their actions correctly against Boston, there were several instances when the offense looked stale and out-of-sync. It’s actually pretty worrisome if the Knicks ran their plays as designed considering the team didn’t make a three-pointer until deep into the second half and they finished the game shooting an awful 42.4 percent from the field — a complete reflection of their poor looks.

Several players indicated the exact opposite of Hornacek following New York’s blowout loss to the Celtics. I was at the game and I saw Courtney Lee instructing players during timeouts about what looked like basic offensive positioning. Lee also talked about the difficulty in getting Porzingis the ball in the right spots:

“KP is using so much energy to try to get open and get in a position where he needs the ball and by the time he gets it he’s tired because the defense did their job as far as battling and fighting,” Courtney Lee said. “If we’re not in those right spots it doesn’t make it easier on ourselves or him. We got to help each other out and especially help him out.” (via Ian Begley/ESPN)

“The switches [that the Celtics employed against the Knicks’ pick-and-roll] — I was in the post with the guard a lot of times and we weren’t reacting quickly enough to use that to our advantage. We needed some time to make those reads and make the right pass and move the right way and have the right spacing. So it was a learning experience.” (via Ian Begley/ESPN)

Below is an example of what Lee and Porzingis are talking about:

Per @IanBegley tweet with Porzingis quote on Knicks not taking advantage of switches vs Boston, here's what he was talking about: pic.twitter.com/yXYWKSTeG9

The Knicks aren’t only missing opportunities to take advantage of mismatches, they are clogging the offense with set plays that seem to have no counters. Notice in the video above that once the entry pass is unavailable, Tim Hardaway Jr. just shoots the basketball. There is no movement by the other players on the floor to create new action off of the failed entry pass.

At least the Knicks are taking more efficient shots

After an 0–3 start, it’s hard to find glimmers of hope. In fact, it only gets worse the deeper you dig. The Knicks starting five has an offensive rating of 78.2, an incredible 15 points lower than their 30th ranked overall offensive rating. But, there is one statistical category that offers improvement: shot type frequency. The Knicks are finally starting to take less long two-pointers, the basketball equivalent of playing a scratch ticket when a 50/50 raffle is available.

When you exchange Carmelo Anthony for Enes Kanter, it’s going to turn a bunch of mid-range jumpers into shots around the basket, which, when you put it that way, sounds appealing. Of course, an attractive shot profile is one thing: the ability to make shots is still half of the equation in calculating expected points. The Knicks might be taking less mid-range shots, but they are also hitting them at a lower success rate than when they still had ‘Melo in orange and blue.

These pairs of numbers define Tim Hardaway Jr.’s return to New York in these very early days. The four-year $71 million offer sheet will likely hang over his head the entirety of the contract, but the 9-for-37 shooting start is hopefully a small streak we will soon forget.

Shooting in basketball is somewhat like hitting in baseball. Players go on hot streaks and cold streaks, both getting lost in their season average. Tim Hardaway Jr. had the best shooting season of his career last year — his effective field goal percentage was in the 75th percentile for his position. Yet, he had a stretch when he shot 11-for-40. It didn’t stick out as much because it was in the middle of the season, not at the beginning of a season after signing a large contract.

Hardaway Jr. has struggled most in spot-up situations and as a ball-handler dribbling off a screen. There’s not a lot of science to his struggles, many of his misses are shots that he normally makes. But his teammates haven’t always helped his cause.

It seems like every help defender gets burned when the ‘Bockers are on defense, but then on offense, the Knicks are one pass too late when trying to take advantage of the same situation created by the other team.

In case you haven’t heard, Willy Hernangómez has had trouble finding minutes in Jeff Hornacek’s rotation to start the season. The awkward roster that resulted from the Knicks desperately needing to trade Carmelo has made a crowded rotation of bigs. Jeff Hornacek has Enes Kanter, Hernangómez, and Kyle O’Quinn all vying for minutes, and this is before Joakim Noah adds another big to the mix when he returns from suspension.

For Knicks fans, the equation is easy: the team is supposedly focused on building around a young core, Willy is part of that young core, so it makes sense to play him. But Jeff Hornacek is also paid to win basketball games. And three games into the season, it is hard to argue against Kyle O’Quinn’s production. The New York native has the second highest Player Efficiency Rating (PER) of the eight Knicks who have played the most minutes this season— interestingly, he is second behind Enes Kanter.

O’Quinn’s physicality and tenacious play was on full display during the Knicks home opener:

Willy should absolutely play regular minutes on the 2017–18 Knicks. He has the potential to be a key piece in the team’s long-term rebuild. But three games into the season, don’t tell Kyle O’Quinn that; he might also whisper in your ear that last season the Knicks were +3.3 net points per 100 possessions when he shared the floor with Porzingis (424 minutes), while Porzingis was a -3.6 net points/100 when sharing the floor with Hernangómez (557 minutes).

That does it for this week. Make sure you tune back next week for another Knicks Film Study.