After an incredible start to the season, Kristaps Porzingis is caught in a shooting slump. Knicks Film School takes a deeper look into why.

Everything is about timing: the timing of a pump fake, the timing of a spin move, the timing of a shot’s release, the timing of a slump. Imagine if Kristaps Porzingis had started the season shooting 25-of-73 from the field? How worried would Knicks fans be? Instead, he got off to one of the best starts in Knicks history, scoring at least 30 points in seven of the team’s first nine games, and images of a young Patrick Ewing were dancing in Knicks fans heads. His hot start helps ease the panic around his recent four game slump, but it doesn’t mean fans have ignored it, especially with whispers of an elbow injury being the cause. 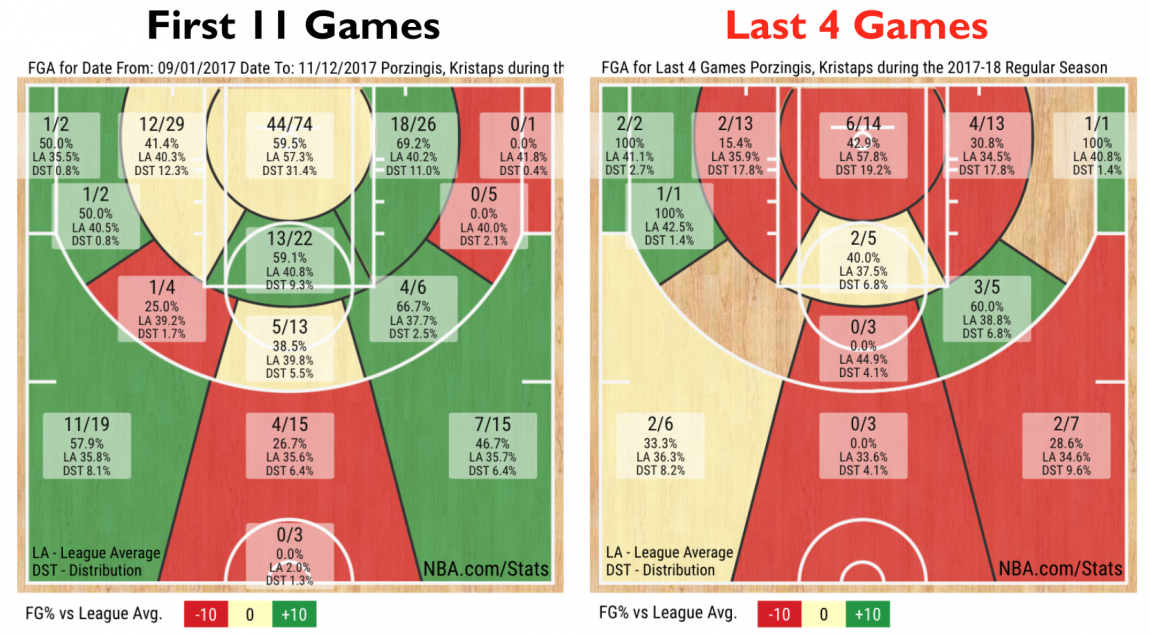 Porzingis’ shot chart has turned from green to red faster than a Midtown traffic light. He has particularly struggled around the basket, shooting 14-of-45 in that range over the last four games.

Let’s take a look into what’s going on.

Has Porzingis ever had a shooting slump like this before?

Ironically, last year, around the same time, Porzingis found himself in a similar shooting slump. Over five games between December 2 and December 9, he shot 25-of-80 from the field. He finally broke out of his funk against the Lakers, using defense as his catalyst. He registered 7 blocks that night and scored 26 points on 8-of-15 shooting.

“I was confident the whole time,’’ Porzingis said of his slump. “It was more getting shots—good shots—in rhythm and not being too anxious and not force things too much. I just wanted to slow down a little bit. The game came to me.’’

It is not uncommon for players with high usage rates to struggle finding the bottom of the net from time to time. Remember, this is the first season Porzingis has carried the lion’s share of the offense since Carmelo Anthony was dealt to Oklahoma City. When the Knicks need a basket, instead of dumping the ball to ‘Melo for an isolation play on the wing, they are doing the same with Porzingis in the post. This is how offenses work in the NBA. Get the ball to your best offensive player, particularly if there is a mismatch, and let him go to work. Unfortunately, it can also lead to forced shots, something I have noticed Porzingis doing during this recent slump, particularly late in games. Against Cleveland, when the Cavaliers put LeBron on him, he had trouble gaining position against LeBron’s strength and ended up taking some bad shots. 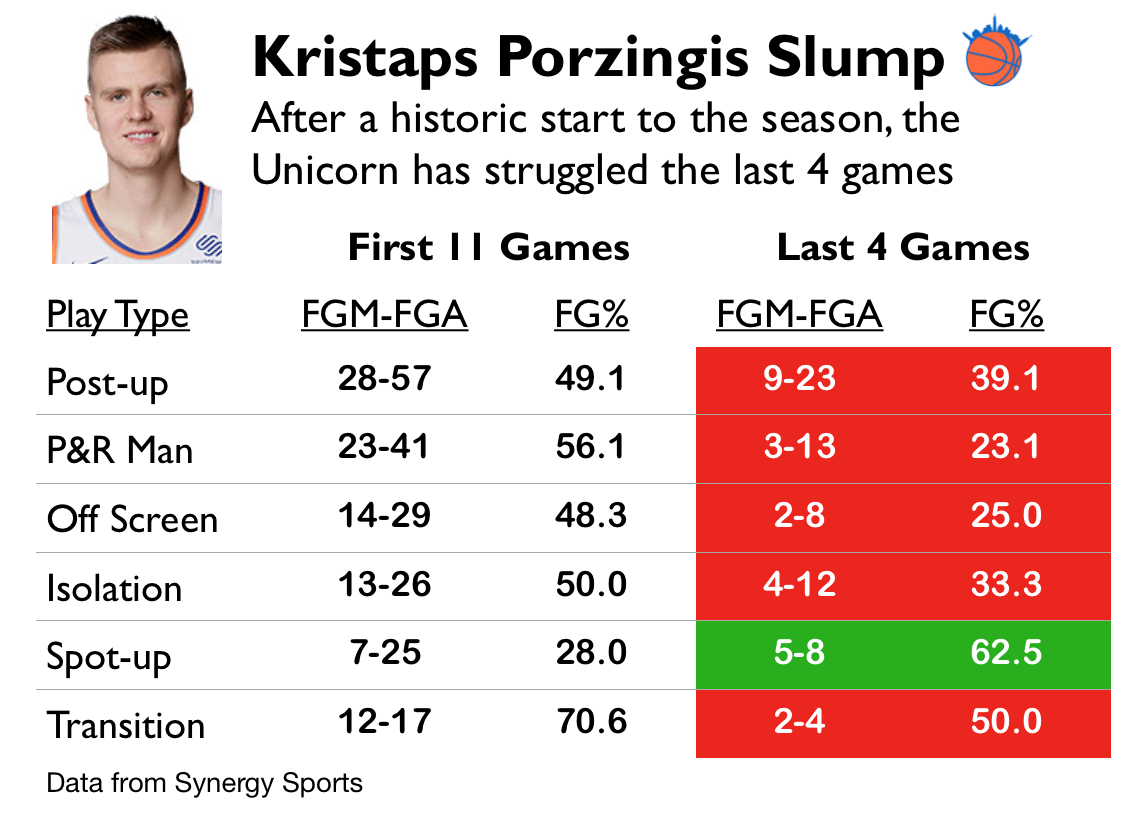 What has Porzingis done differently from the start of the season?

Porzingis has struggled almost across the board over the last four games, but it is clearly his post-up play and ability to finish as a pick-and-roll man that have contributed the most to his poor shooting totals.

Earlier in the season, I did an analysis of Porzingis in the post, and I found he was showing a strong tendency to turn with his right shoulder before taking his shot. This is actually a bit odd for a right-handed shot. Shooters usually have an easier time getting their shot off when they are turning with their shooting hand away from the defender. In Porzingis’s case, this would be turning toward the left out of the post (remember, his back is to the basket in these situations).

Last season, as the logic suggests, Porzingis shot best when turning with his left shoulder from the left block. Where the logic did not prevail was on the other side of the paint. The Latvian big man only shot 4-for-21 when turning left from the right block in 2016-17. Perhaps that is why he started this season trying to make more shots turning the opposite direction. Whether strategic or not, this strategy has caught up to him.

On the play above, you can see how Kevin Love is able to contest Porzingis’ turnaround fairly well, aided by the turn Porzingis takes, putting his shooting hand closer to Love on the take.

In the play below, Porzingis does the opposite. This time, from the right block, turning left, so his shooting hand is away from the defender.

Porzingis is a unicorn because he can do so much on the floor. He isn’t your traditional big man because he can spot-up for a three from damn near the center court logo. Yet, he is your traditional big man when he wants to be a lethal scorer in the post. His long-range shooting is more developed than his inside post moves, so we should expect to see changes in tendencies and results on plays he has his back to the basket.

Porzingis becomes a challenge for opposing defenses to defend in the pick-and-roll because of his ability to step out for a long-range shot. Before his recent slump, Porzingis was shooting 19-for-35 (54.3 percent) on pick and pops or plays he slipped the pick and took a jumper, per Synergy Sports. Over the last four games, Porzingis is 3-of-12 on these same plays.

For Knicks fans, it is these kinds of plays they should worry about the least. You know it’s a shooting slump when KP is missing wide open threes like the play highlighted above.

Finishing Around the Rim

This is closely related to his recent post-up struggles but adds another element: driving to the hoop. In Porzingis’ first 11 games, he averaged 2.9 drives per game and shot 45 percent on those drives. Since then, he is driving more often (3.5 per game), but finishing a dismal 25 percent of the time. This is especially problematic because he only passes out of these situations sparingly:

Of course, defense is half of the equation, and KP has found some tough defensive match ups in recent games:

Whether it’s just good defense by a player like LeBron James, or not, the Knicks get into trouble when they have forced the offense to Porzingis instead of letting it come to him more naturally. It’s one thing to miss open three-pointers; those will eventually fall. It’s another thing for the Knicks to put Porzingis in situations that make it difficult for him to score. I don’t think this accounts for much of his shooting slump. Much of it is simply him missing shots that he usually makes, and over a small sample size, a few shots here or there can make a big difference in the overall numbers.

However, his post play and ability to finish on drives to the hoop are a few things to keep an eye on as he works out of this slump and continues to develop his offensive game.