Have the Knicks Finally Found a Way to Extract the Best Frank Ntilikina? 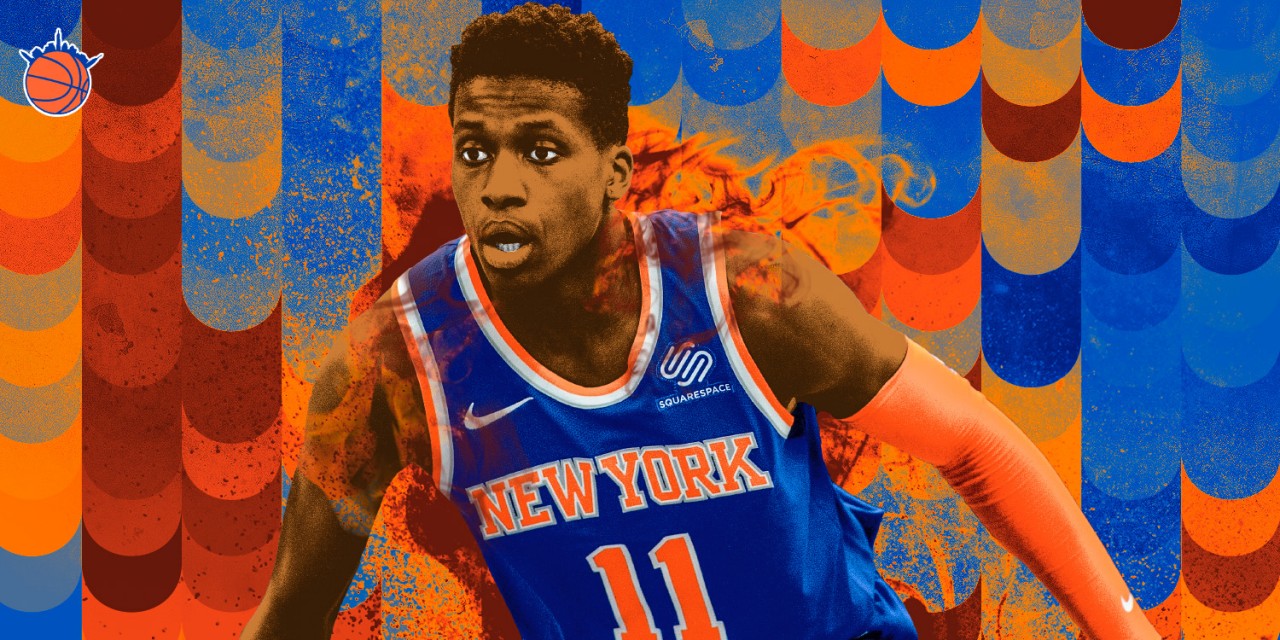 Frank Ntilikina hasn’t been the starting point guard for some time now, but is Mike Miller onto something with his latest role for the third-year Frenchman?

It’s hard to find an NBA player more polarizing within the confines of their own fanbase than one Frank Ntilikina. Rarely do you see fans demanding starter’s minutes for a point guard with career averages of 5.8 points and 3.0 assists per game on 36% shooting from the field, but that’s where we are in the dystopian-esque shallows of the internet known as Knicks Twitter.

But the love for the man affectionately dubbed “Frankie Smokes” is not just limited to Knicks Twitter. Go to the Garden on any given night and see how the crowd reacts to Ntilikina simply contesting a shot that ultimately falls short. And if he dunks? Pshhh. You’d have thought he just scored his 63rd point of the game to usurp ‘Melo as the Knicks’ single-game high scorer. But when your team has won just 65 games over the last three seasons combined, these are the small joys we’ve come to appreciate. And believe it or not, there are some NBA fans who actually appreciate defense—just look at how well-received this year’s All-Star Game was.

However, most Knicks fans, obviously myself included, agree that Frank’s style of play won’t stand out on a crappy team. In fact, it’s basically the complete opposite—the common school of thought is that Frank’s intangibles, defense, and basketball I.Q. would be better accentuated on a competitive team. In other words, Frank isn’t going to intentionally stuff the stat sheet with empty numbers on a bad team in lieu of playing a winning style of basketball (something you can certainly say about plenty of other Knicks, past and present). Instead, he’s going to continue to do all the little things like diving for loose balls, switching onto a big in the post for a possession, and making an entry pass into the post to initiate an offensive possession. None of those sheets show up on the stat sheet, but they’re just as important as making an open shot or converting a highlight dunk.

The Versatility of Frank Ntilikina

That’s why it should come as little-to-no-surprise to hardcore Knicks’ fans that Ntilikina’s name came up in trade talks with the Warriors’ for All-Star point guard D’Angelo Russell. When the Dubs are at full strength, Ntilikina could be a huge component of a championship-caliber team. He just needs to be in the right environment and especially one with plus shooting.

Obviously the Knicks aren’t a championship-caliber team, and they have what is basically the exact polar-opposite of great shooting and spacing, but everybody on the 6 train will tell you that Frank is having a career year despite numbers essentially in line with everything he’s done in the NBA thus far. In 20.6 minutes per game, Frank is averaging 5.8 points, 3.0 assists, 2.2 rebounds, and a slightly under a steal a game. His shooting numbers are up, albeit, ever-so-slightly, as he’s shooting 38.2% from the field, 30.4% from behind the arc, and an unequivocally impressive 86.4% from the charity stripe.

Nevertheless, Ntilikina is still being underutilized by interim head coach Mike Miller, who’s not only coaching for his job and NBA livelihood, but doing so with a roster that contains a logjam of mediocre veteran players at essentially every position. And reports suggest that he’s under pressure by management to play certain players, too.

But if there’s one thing we’ve seen from Miller in regards to Frank, is that he’s seemingly putting him in better positions when he does get him in the game. This is especially true since Frank’s groin injury. Miller has refrained from using Ntilikina strictly as a backup point guard, but rather, a versatile bench piece who can play the 1,2, or 3. He’s primarily been playing the off-guard position, which is somewhat ironic, considering Frank’s lack of shooting touch, but it should be noted that Miller felt the most comfortables starting the third-year guard at one of the wings after Marcus Morris was traded to the Clippers.

Frank Ntilikina is starting at shooting guard. Barrett is available and coming off the bench.

His numbers at shooting guard, however, haven’t been all that stellar, at least when you’re looking at raw numbers. In that start against the Magic, a win, he scored just two points on 1-3 shooting. And over his last ten games in general, Frank has averaged just 4.8 points and 2.3 assists, seeing minutes at both guard spots. But those numbers don’t tell the full story. Despite poor shooting numbers, the Knicks are still markedly better when Frank is on the court versus when he is off. The Knicks have managed to outscore their opponents by 19.3 points per 100 possessions when the Frenchman is on the court, versus when he’s off. That’s good for—wait for it—the best Net Rating on the team.

Over the Knicks last ten games, NY has outscored thier opponents by 19.3 points per 100 possessions with Frank Ntilikina on the court – best Net Rating on the team.

Over last 10 games, NY has been outscored by 15.4 points per 100 possessions – worst Net Rating on the team. https://t.co/cAhYLSQwA8

Of course, Frank can contribute to a team so long as the team gives him enough minutes, and Miller, despite being in a precarious coaching position, seems to on the right track by getting him on the court as both the primary ball-handler and an off guard. We just wish he gave him, you know, more of them. But with the All-Star break coming to an end, that could certainly be in the cards.

The point here being: Frank Ntilikina needs to be on the court more often than not. The Knicks’ offense runs smoother when he is and his defense speaks for himself. The larger point here is that he simply doesn’t have to be that elusive point guard savior we’ve all longed for. After all, he was drafted by Phil Jackson to play the lead guard in the Triangle, which is hardly a modern offense. In fact, one could make an argument that a Triangle point guard is, essentially, a combo guard who can make open shots, set up an offense, and play defense on the other end. Miller, who is actually well-versed in the Triangle as a coach, likely understands this and has made a concerted effort to get Frank in the game as a secondary facilitator. If—or more like when—Barrett takes the next step as a bonafide scoring threat, Frank would seemingly be a solid fit next to a drive-first player who could carry the load on offense.

Just look at the video below, where Ntilikina skips in an entry pass in the post to Julius Randle for an easy bucket. This basically requires the athleticism of a 300-pound, middle-aged man at the Y, so it’s far from an athletic feat, but most NBA players, who simply prefer to drive into the paint with reckless abandon (cough, DSJ, cough), don’t make a fundamentally sound play like this with regularity. But Frank does.

And despite where Frank is playing on the court, you know he’ll be guarding the opponent’s best backcourt player. Even in the Knicks double-overtime loss against the Atlanta Hawks, where Miller’s coaching decisions could certainly be scrutinized ad nauseam, the coach decided to substitute Frank into the game for defense in the waning seconds of their first overtime. Finding creative ways to get Ntilikina involved defensively is certainly a step in the right direction. If you take a lo0k at Frank’s numbers against Trae Young, who has lit up the Knicks for 42 and 48 points in two games this season, respectively, the French Prince is holding the second-year All-Star starter to nine points on 33.3% shooting from the field. Albeit, this is in a little over 6:30 of action, but a simple eye test will bring you to the same conclusion.

The Knicks, undoubtedly, still need to flank Frank with more shooters, so we can get a better look at his strengths without focusing too much on his weaknesses, like his inconsistent shooting and an inherent lack of aggressiveness (Although I’m sure Elfrid Payton would sell his firstborn for just a crack at Frank’s shooting form). But he has shown marked improvements in ball-handling, decision making, getting into the paint, and overall confidence this season. Buying out a veteran like Wayne Ellington or even Maurice Harkless would provide Frank with consistent minutes on the wing, but it still remains to be seen if that’s in the cards. Either way, the Knicks need to prioritize playing time for their young players, and Frank would easily be one of the biggest benefactors. Playing him alongside guys like Payton and R.J. Barrett could only bode well for Ntilikina’s ability to get clean looks on kick-outs.

But the true moral of the story here, is simply that guys like Frank Ntilikina remain a huge commodity in the league. Andre Iguodala, who is 36 years old, sat out half an NBA season, and averaged a whopping 5.7 points just one season ago, got traded to the Miami Heat for a solid young player in Justise Winslow and promptly signed a two year, $30 million extension. This isn’t insinuating that a young Frank Ntilikina has the championship pedigree of Iguodala, but at 21 years old, the Frenchmen certainly has similar intangibles. He can come off of the bench, set up an offense, guard the best player in an opponent’s backcourt, and doesn’t need to score—or even have the ball in his hands—to be effective. Plus, I think it’s safe to say the Knicks can keep Frank around for less than that $30 million price tag. He might not ever be a star, or even a starter, for that matter, but putting Ntilikina in a position to succeed—which at this point, is just getting him on the court, regardless of position—is the best way Leon Rose and the Knicks can show their fans they want to build a team the right way.

In a league that clearly values versatility—and the increasingly rare art of perimeter defense—Frank could make his mark for a team, whether it’s in New York or somewhere else. Speaking here for the majority of Knicks fans, hopefully, it’s the former.