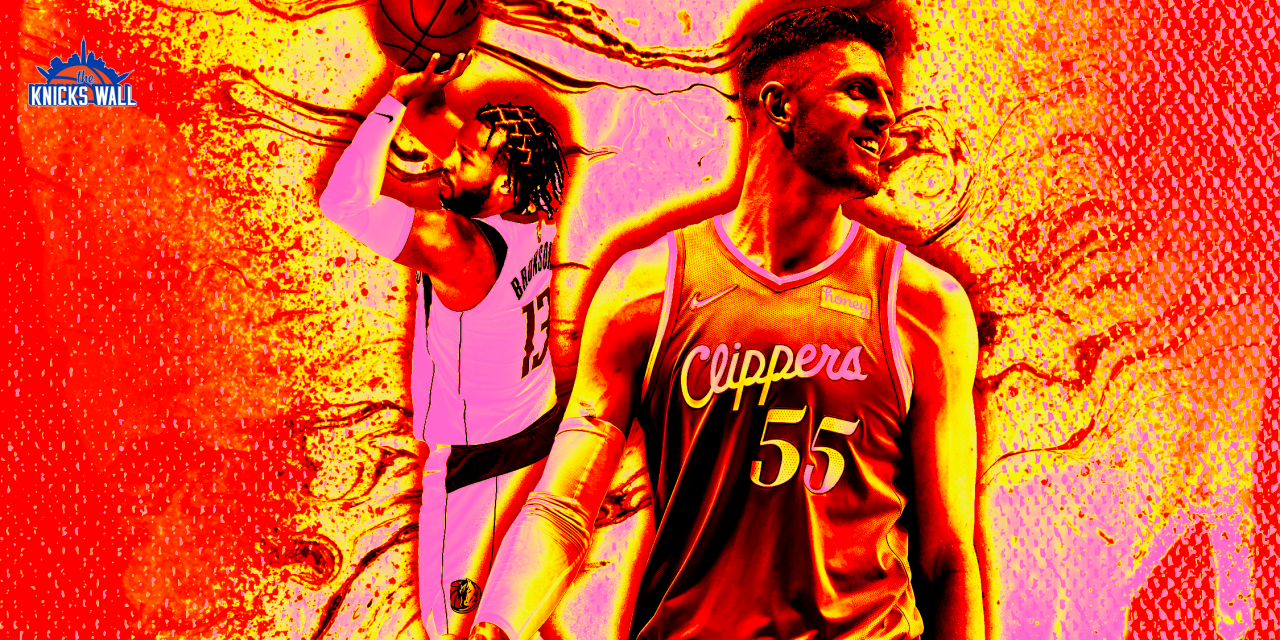 Leon Rose’s Knicks have shelled out $180 million in contracts so far this free agency, and a plan appears to be emerging for a front office with little to celebrate after two summers in charge.

For three summers in a row, fans have patiently waited for the Leon Rose regime to make a move. With monk-like patience, they sat through two summers in which marginal signings were made, albeit to success. But still, in the grand scheme, the playbook was to remain flexible with short-term, team-friendly contracts until the big move reveals itself.

While that move has yet to surface, the team has not sat on its hand as past regimes tended to do. Culture crafting has been the focus of the Rose regime. Tom Thibodeau was inserted as head coach to instill a workman’s attitude to the team and, armed with the right young players, the result is starting to show itself.

The main obstacle last season was those same marginal signings that made a playoff appearance possible a season prior. Evan Fournier was the first big “splash” signing made under Rose, a misguided attempt to recapture the magic of the season prior. Other than that, a bunch of bridge signings were made, which created a natural tension point for fans and players alike if things went south as they did last season.

That is what made last week so refreshing.

That night fans saw their Jaden Ivey dream killed, revived, and killed again, with the Knicks ultimately pivoting to Plan B. That plan was to use their first-round pick not on a player, but for cap space. The team flipped the 11th overall pick to the Oklahoma City Thunder for three 2023 first-round picks, setting the stage for a big free agency.

Fans had seen this movie two summers in a row. The front office quietly plotted for a major move, only to sign a bunch of secondary targets to team-friendly contracts. This summer was different, however. For the first time in the three free agency periods under Rose, the Knicks were able to secure their top target.

The worst kept secret heading into the start of free agency was that the Knicks had their eyes set on Jalen Brunson. Family and agency ties, a chance to be a starter, plus $100 million were compelling enough an argument for Brunson to move on from a pretty sweet setup in Dallas playing with Luka Doncic, a player on the cusp of taking over the whole league.

Brunson is not the star signing the team has in mind, but they targeted him as a vital player. Brunson shares many of the traits of the current core pieces: a gym rat that has improved incrementally since entering the NBA with increased responsibilities. That context makes it much easier to buy into Brunson taking a greater step forward with more responsibility in New York.

When Doncic was out for the first three games of the Mavericks’ first-round series versus the Utah Jazz, Brunson averaged 32.0 points, 5.3 rebounds, and 5.3 assists per game, including a 41-point masterclass in Game 2.

Brunson fried whoever the Jazz put in front of him, scoring from anywhere he pleased, and still managed to contribute elsewhere with eight rebounds, five assists, and two steals. Even with Doncic back, Brunson was able to be the wingman, averaging 19.5 points per game.

The versatility in what role Brunson can provide on a given night will be welcomed on a team with a growing young star. How a player fits next to RJ Barrett should be heavily weighed, and despite initial concern, Brunson and Barrett should be able to coexist. The two lefties share a few similarities beyond their dominant hand.

Like Barrett, Brunson is the son of a former player and understands the work that goes into improving year after year. As former Knicks head coach and friend of Brunson, Jeff Van Gundy, put it so eloquently, “The fools don’t get better. Serious players continue to get better because it’s important to them.”

Barrett and Brunson are both serious people as are Immanuel Quickley, Julius Randle, Obi Toppin, Mitchell Robinson, and the list can go on. There is a specific type of player the Knicks have brought in the last couple of years, gym rats that want to win. Clearly, Rose trusts Brunson to be a focal point on and off the court, because he already shares those same values.

The price tag of $104 million sounds steep at first glance to some. Brunson is the first player to sign a $100 million contract without making an All-Star team, and just the fifth $100 million man in franchise history. Unlike the previous four players (Carmelo Anthony, Allan Houston, Amar’e Stoudemire, and Julius Randle), Brunson is not going to be saddled with becoming the face of the franchise.

In a nice stroke of good public relations before the signing was made official, the team let it be known they did not view Brunson as the piece to a drastic turnaround (which is how the Fournier signing was viewed and ridiculed), but as an important piece towards the goal of a championship team.

The Brunson signing set a clear path for the rest of free agency.

Once Brunson was taken care of, the team moved quickly to strike a two-year, $16 million deal with seven-footer Isaiah Hartenstein. The former Clipper is just 24 years old and provides a competent player to anchor the defense, with the upside of stretching the floor on offense.

Hartenstein’s passing ability should make him an ideal backup to Mitchell Robinson and a fun addition to the bench mob. Insert him into lineups with the likes of Quentin Grimes or Immanuel Quickley, and plays like this could become the norm.

Isaiah Hartenstein is a really good big-man passer. Great feel for the game, quick decision-maker, makes plays out of the short roll. Gives us a new look offensively

I was really impressed with this aspect of his game when he got extended mins for the Cavs a couple seasons ago pic.twitter.com/3UkdEq42by

The Hartenstein signing showed the front office’s confidence in Robinson to be the starting center, which was swiftly followed by a financial commitment. Hartenstein is an underrated player, and definitely not among some bigger names the team could have gone after.

A day later, Robinson agreed to a four-year, $60 million extension. Robinson’s extension was a key milestone in the front office’s effort to build a sustainable winner. Internal talent became a forgotten concept in New York. Robinson, a second-round selection, may not technically break the Charlie Ward Curse, depending on your definition; however, he is the first Knick draft pick since Ward to sign a second, multi-year deal.

The extension shows stability, and that good work will not go unrewarded. Sticking with the theme of Brunson, Robinson has improved each season. Last season, only Steve Adams pulled in more offensive rebounds than Robinson. He has cut down on fouls and forged a tight bond with Barrett.

His one downfall is his one-dimensional scoring. As a rookie, it appeared that Robinson could one day develop a jumper. Instead, with each passing year, Robinson becomes a worse free-throw shooter and scores almost exclusively off lobs, offensive boards, and lobs. The workaround is that Robinson was not paid to score the basketball, he was paid to keep others from scoring.

The flurry of moves allows the team to now focus on more pressing needs, such as the RJ Barrett extension. Barrett’s draft classmates have all inked extensions so far, while things have been quiet in New York. Every move the team has made so far though suggests Barrett will be taken care of when the time is right.

Before the team commits nearly $200 million to their franchise cornerstone, other business can be had. A blockbuster trade for Donovan Mitchell does not appear to be in the cards right now.

The Knicks still have assets to deploy. They possess nine first-round picks over the next five seasons that could be used in a blockbuster trade, but can also be used to clear the likes of Evan Fournier or Julius Randle if the team is ready to move on. Fournier’s contract becomes an asset after this season, and Randle still has a shot at redemption if he can survive the summer.

Where the Knicks go from here decides on the league landscape once the saga with the Brooklyn Nets is settled. The key is that the Knicks finally took steps towards what they believe is a step in the championship direction. Whether this is the core of guys that can get that done remains to be determined.

For now, fans can take solace in the fact the front office finally put some money behind their actions, showing there might be a plan here after all.