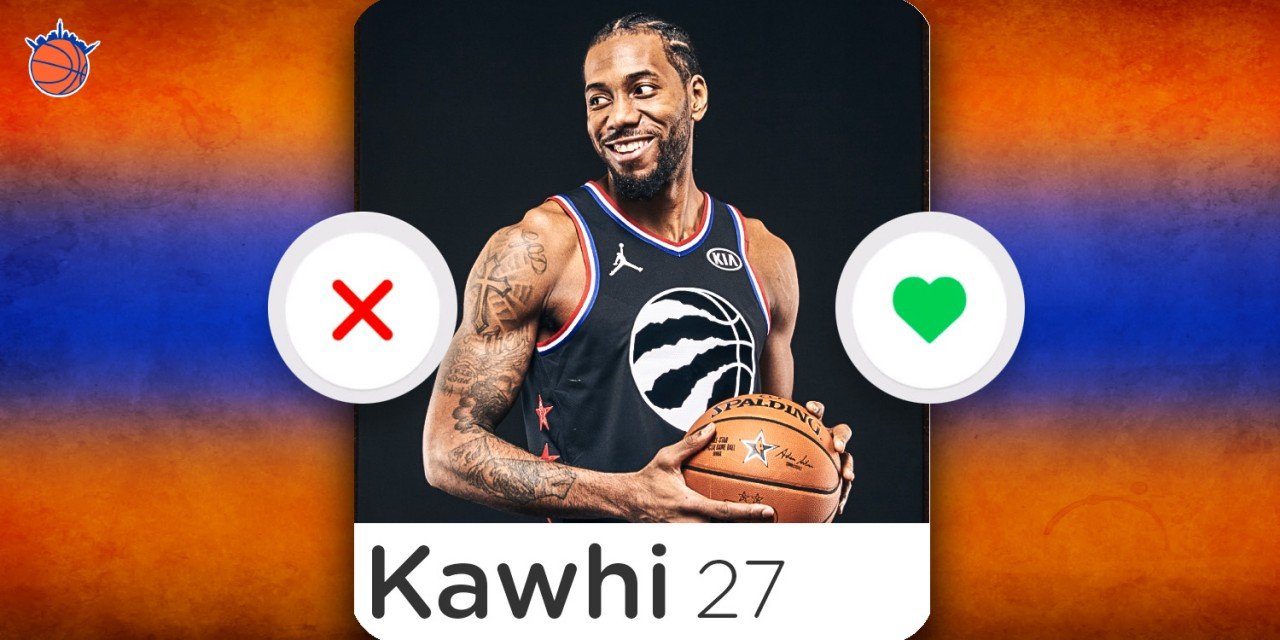 Recent reports indicate the New York Knicks are pursuing Kawhi Leonard in free agency, but is the reigning Finals MVP interested in the Big Apple?

If free agency were a dating app, Kawhi Leonard would be an obvious, quick right swipe for the New York Knicks.

With Marc Berman of The Post reporting the Knicks’ front office is confident they will get a meeting with Leonard when free agency kicks off, it’s hard not to shake with excitement. Leonard would immediately become the team’s best player, and one who would transform the ‘Bockers on both sides of the ball.

Leonard has made his case for consideration as the best player in the league. His entire offensive repertoire has improved each season, vaulting him to superstar status. His ball handling is excellent, letting him drive to the hoop through defenses and pass to shooters in the corner. He has refined his jump shot to the point of near perfection. His smooth, straight-on form makes him a consistently great shooter from anywhere on the floor, especially in tight games down the stretch where his iso ball becomes important. His pull-up jump shot forces defenders to play up on him, which opens up lanes to drive to the rim.

Kawhi is an absolute monster on offense, and has proved his abilities at the highest levels of the game. His offensive game would flourish regardless of scheme, which is something the Knicks have lacked thus far in the David Fizdale era.

Leonard has also won two Defensive Player of the Year awards. His defensive ability is unquestioned. He can guard multiple positions, create havoc for the league’s best ball handlers, and with his size can typically guard the other team’s best player. After his injury last season, he isn’t at his peak defensive ability, but he is still one of the best defenders in the league. On a Knicks team lacking even average NBA defensive ability, Kawhi would immediately provide help where it is badly needed.

Convincing Kawhi to sign with New York would be franchise altering both on and off the court. Leonard is the perfect superstar: he shows up in big games and causes zero drama. Kawhi is without question the best free agent on the market, with Kevin Durant going down with an Achilles injury that may sideline him all of next season.

Leonard would become the best free agent the Knicks have ever signed. New York has been accumulating young players and draft picks, and a Kawhi signing would make a potential trade of draft picks for current top-level players more appealing. The Knicks will have the flexibility to pair a second big salary player with Kawhi to start competing right away.

If Kawhi swipes right back at us, we aren’t playing games. We’re coming at him with movie plans and a dinner reservation.

A double-headed attack of Kawhi Leonard and Bradley Beal would be an incredible pairing. Beal doesn’t seem to be on the market, as Washington’s owner Ted Leonsis seems to have a huge soft spot for him as the team’s lone star player, with John Wall’s injuries putting his career up in the air. It would take a major haul for Washington to consider moving Beal—a mixture of a few of the Knicks young players (Kevin Knox, Dennis Smith Jr., Mitchell Robinson) and draft picks (the Knicks own picks plus the two future Dallas draft picks New York owns).

Beal is controlled for the next two seasons under his contract, which drives up his value. If the Knicks landed a star, letting go of the young players for Beal would not feel risky, and would be a no-brainer move for the team.

Yesterday, Yahoo’s Chris Haynes reported Leonard will turn down a $21.3 million player option with the Raptors for the 2019–20 season, but his intention this offseason is remains a mystery. Leonard has prioritized big markets like Los Angeles and New York in the past and is believed to be considering Toronto as a serious option.

Having led the Raptors to their first-ever NBA Finals win puts Kawhi in a unique situation to be universally loved no matter his decision. Where he decides to play, we won’t have to wait too long to find out.

»READ: Despite Nets’ cap-saving move, not all is lost for Knicks in free agency