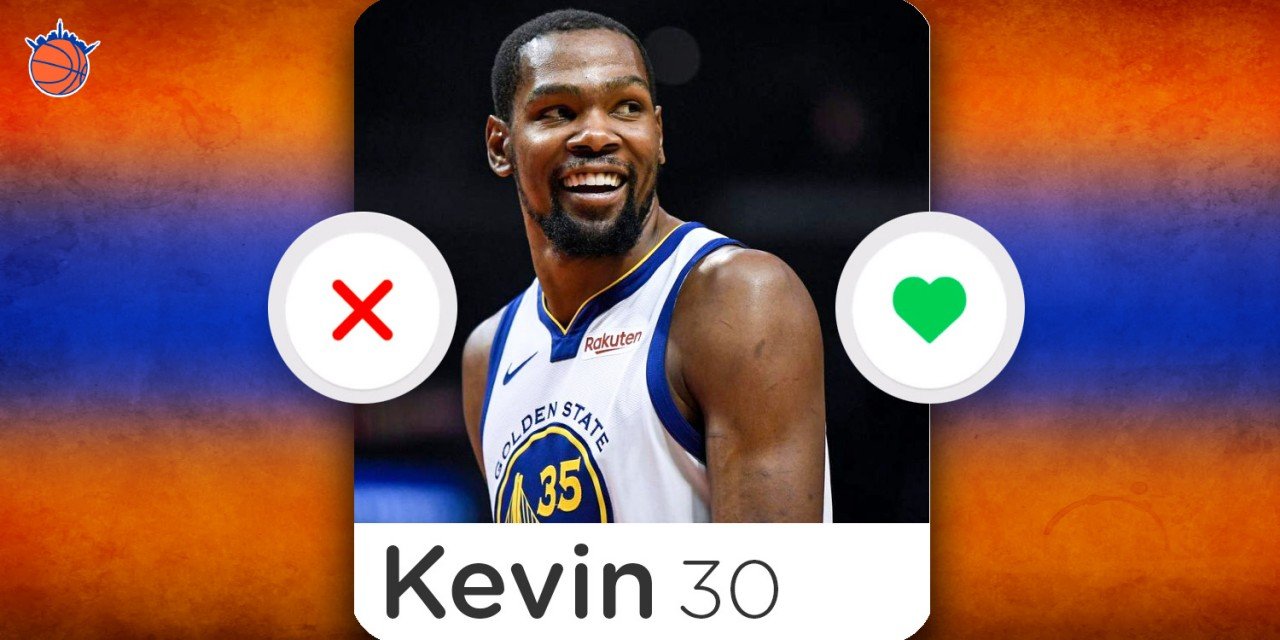 Can the New York Knicks convince the now-injured Kevin Durant to pick them in free agency even if they can’t land another star?

Kevin Durant’s injury is painful for many reasons, and the magnitude and scale of the Achilles tendon rupture will no doubt have long-lasting effects on the rest of a star-chasing league.

For the Knicks, Durant was the (big) apple of their eye—the light at the end of a bleak, ceaseless tunnel of the past season. While signing Durant was far and away a done deal, New York’s front office hardly believed it would have to hurdle over the former MVP’s health as a potential obstacle preventing the franchise from landing its biggest star in…ever.

The Golden State Warriors are currently reeling from an NBA Finals loss and possible end to their dynasty. They have an aging Stephen Curry signed for the long haul, volatile Draymond Green signed for the moment, but Klay Thompson and Kevin Durant are free agents—and re-signing both All-Stars could financially cripple the team without either of them setting foot on the hardwood next season due to a torn ACL and the aforementioned Achilles rupture, respectively.

So, presumably, the Knicks are still in the driver’s seat to push and sign Durant, right?

It’s not that easy. There were and are benefits to Durant coming to the eastern seaboard. First, he wanted to have a secure legacy to which only good fortune could be added—bringing a title to New York would be great, but with three championships in the bag, there wouldn’t be immediate pressure to make a Finals run. However, a third title was never earned for KD; no three-peat for the two-time Finals MVP, and instead Durant, who declined his player option on Wednesday, heads into an uncertain offseason. He could re-sign with the Warriors for multiple years and more money, essentially forfeiting next season for rehabilitation but returning to make another run.

But why would he? And why not choose his own doctors in the safety of his own house. This could be the first and foremost reason the Knicks would proposition Durant. While there was a mild hullabaloo about Durant going to New York to have the Achilles surgery performed—it’s really not a big deal, he went to a well-regarded hospital that happened to be located in the nation’s largest city—there is something to be said about continuing physical therapy and rehab in close proximity to the Hospital for Special Surgery.

Next would be the Knicks’ original pitch—build a formidable legacy and win a championship in New York. You’ll get your choice of co-superstar. Reportedly there’s been a fracture in the friendly All-Star tandem Durant and Kyrie Irving’s choice of venue, with Durant rumored to prefer the Knicks and Irving wanting to join the upstart Nets. Now with Durant sidelined, Irving may opt to leave that dream behind, but having Durant on board, in spite of his injury, could keep that train on the rails. Should New York keep its third overall pick, R.J. Barrett, the Knicks would have cap space to sign Durant, Irving, and a lower, supporting cast to fill the roster out to the star’s liking.

In other words, part of New York’s pitch would be assembling a superteam for Irving and Durant, but forestalling the ultimate pièce de résistance for another season. It would be a small price to pay for the stars to deliberately get to know the city, their teammates, and the coaching staff and organization.

Per Stefan Bondy of the New York Daily News, Durant’s injury is the leading caution in signing the former second-overall pick:

“Still, the Knicks are cautious about a big commitment to Durant. A source said the team wanted to review the medical records and get a better understanding of the recovery before making an offer.” (Daily News)

Another twist has been the rumored sign and trade with Golden State. This would, ultimately, be the only scenario in which the Knicks should not pursue Durant. Allusions to the Carmelo Anthony trade come to mind, but this is arguably worse: gutting the already-flimsy roster for KD would leave the Knicks talent-barren again and without the primary player for which you traded for an entire season. The Knicks cannot risk another year without legitimacy and young pieces to build around.

An injured Durant missing next season is an easier pill to swallow with New York continuing to focus on developing Barrett, Mitchell Robinson, Kevin Knox, and Allonzo Trier.

I see you out and about in my city. Wishing @KDTrey5 a speedy recovery. pic.twitter.com/jk0u3Gusp2

The Brooklyn Nets threat is substantive, too; there’s a real possibility Durant believes Brooklyn would provide everything and more to his “legacy” and “brand”—especially if that includes teaming up with Irving. There’s also a chance they go their separate ways.

And what if Irving chooses Brooklyn or the L.A. Lakers over the Madison Square Garden franchise—should the Knicks still pursue Durant with the Achilles rupture part of the package? The answer has to be yes. Anthony Davis is a Laker because the Knicks didn’t have the assets to acquire the soon-to-be former Pelican. Whether we want to believe it or not, the Knicks are still pretenders, not contenders. Signing Durant would at least provide a backbone and structure to assemble a contending team with an elite player, warts (32-year-old coming off Achilles surgery) and all.

Plenty of ink has been spilled illustrating the “greatness” in which KD would be enshrined should he choose the Knicks. But until the ‘Bockers convince one of the game’s all-time scorers to sign in New York, the fictitious world will continue to be supported in the collective minds and imaginations of beleaguered New Yorkers.