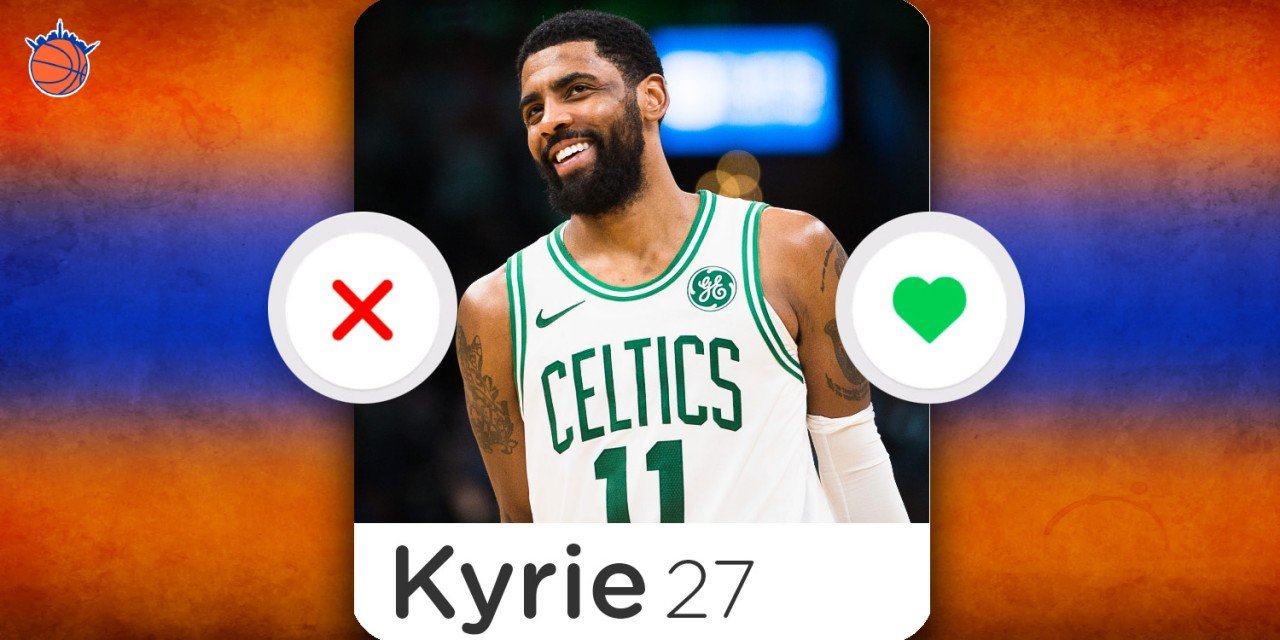 Kyrie Irving has teased a free agency destination landing in New York…but it may not be the Knicks invited on this date.

It’s easy to want Kyrie Irving on your team.

He’s top five at his current position. He is has navigated the tough terrain of the playoffs, and hit one of the most clutch shots in NBA history. His skill set redefines tantalizing, with an array of exquisite moves in his arsenal—a lethal weapon in the halfcourt. Oh, and he has the best handles the league has ever seen. That is not up for debate.

It’s really easy to want Kyrie Irving, especially if you’re a Knicks fan. He would immediately be the most talented point guard the team has had since… at least Rod Strickland (conveniently Kyrie’s godfather). He is a local product, from New Jersey, possesses the flash to make Madison Square Garden swoon on any given night, and the skill level to keep the team in any contest.

The point is that you cannot trust Kyrie’s word. He is a free spirit. Those type of people do not think logically, but spiritually.

For example, he left LeBron James, the greatest player most of us will ever see, to branch out on his own. He found the ideal landing spot with a great organization, a great coach, a great young core, a guy he recruited to come to Cleveland (Gordon Hayward), and a reliable veteran (Al Horford). He seemed to have found his new home. A year later, he decided this wasn’t for him.

Now he has his eye on New York—just not the New York we want it to be. Word on the Twitter timeline is Kyrie wants to be a Brooklyn Net, and is reportedly trying to convince Kevin Durant to join him, depending on the day and the reporter you ask.

There are also rumors that the Nets are looking to add DeAndre Jordan in hopes of enticing Durant further to join the other New York team. If it takes adding Jordan, which could eat into Mitchell Robinson’s minutes, the appeal of Kyrie lessens considerably.

If you’re Scott Perry and Steve Mills, this is Kyrie doing you a favor.

The Knicks have failed over and over again in stability. They have finally seemed to figure out how to do things right, taking no shortcuts, and building with a group of young guys who genuinely like each other. Throwing a wild card who clearly doesn’t know what he wants on any given day is the perfect way to collapse that foundation—like the Celtics at this very moment. And bending over backwards at the expense of casting young guys Dennis Smith Jr. and Robinson aside makes this much easier of a decision.

The talent is undeniable—don’t let me fool you. Anyone who averages 23.8 points per game in his sleep is a stud. He is the halfcourt scorer you need to win during those rock fight playoff games, as his three Finals runs with the Cavs showed.

But the Knicks are just not there right now. Kyrie has proven to have the patience of Tony Soprano when things don’t go right. Perry and Mills probably knows this as much as Kyrie does.

That is why the Knicks must pull a George Costanza and reject Kyrie before he has the chance to reject them. Other stars will come when the Knicks are ready, maybe as soon as next summer. Sign Durant if you can, but Kyrie’s greatest assist to the Knicks has already been accomplished: destroying the Celtics. Swipe left and let Sean Marks deal with him.

»READ: Are the Nets a threat to the Knicks’ free agents aspirations?

»READ: Do the Knicks have a clear path toward Kyrie Irving?