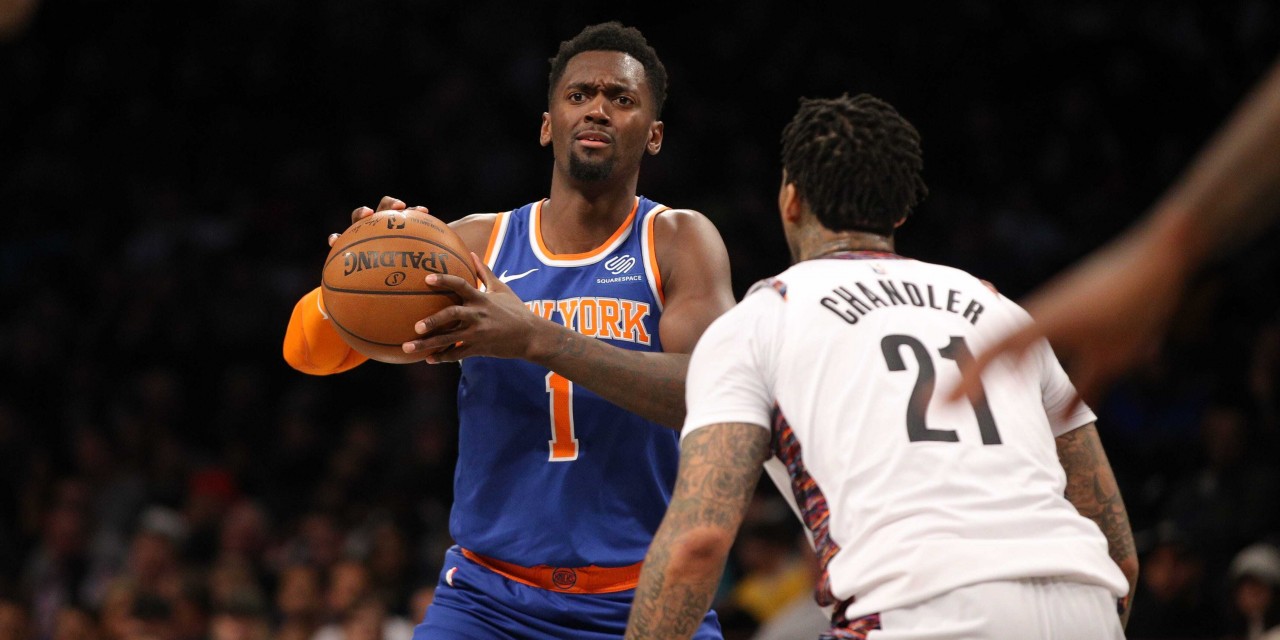 The Knicks have been cited in new reports as standing pat instead of being sellers at the NBA’s trade deadline. That would be a grave mistake.

The definition of insanity is doing the same thing over and over again, but expecting different results. If the rumors around what Steve Mills and Scott Perry plan to do during the deadline are true, they are certifiably insane.

That rumor, first reported by SNY’s Ian Begley, is that the Knicks are not fully committed to selling at the deadline.

Just to reiterate: the front office of a team that is 10-28 is not sure if they want to be sellers at the trade deadline, which by the way is fewer than four weeks away. To quote Frank Costanza, serenity now!

Not selling at the deadline is not just idiotic, it’s malpractice. Mills and Perry, New York’s president and general manager, spent months peddling financial flexibility. Every summer signing, with the exception of Julius Randle, could be let go for no additional cost if the season went awry, signing the rest to one-and-one deals with team options. The season has gone awry, only now Mills and Perry are not sold on selling just yet.

What they see in this team is anyone’s guess. It’s a poorly put together roster that has performed below their expectations. Despite the poor play, teams that have been in touch with the Knicks—there has been reported interest in Dennis Smith Jr., Bobby Portis, and Marcus Morris—believe draft picks and young players are not the only return they are looking for in potential deals. They believe the Knicks are in the market for starting-caliber players who can help win now and in the future.

Knowing that both Mills and Perry are on the hot seat after the failure of a big summer on the heels of the Kristaps Porzingis trade, this isn’t shocking news. And depending who they identify as starting-caliber players who can help win now, it might not be as bad as it sounds. The main thing that is wrong with this current roster is there aren’t many good players on it. If they are targeting a guy like Bogdan Bogdanovic, it’s a forward-thinking move. If they are referring to DeMar DeRozan, burn the whole thing down.

The bigger problem is the win-now portion of the report. That leaves the door open for Morris, the one guy who can yield a legitimate return, to stay put. Morris has been the best signing by a considerable margin, in the midst of a career scoring year, and the best player on the team. Morris is also the only player on a pure expiring deal with no Bird Rights, making him the one guy you have to flip.

There is no justification to keep Morris, or any of the other veterans, other than a public relations play. Morris said he wants to be in New York long term, which has led some to clamor for the Knicks to not sell their only good player. What has been forgotten by some is the fact that Morris can come back to New York in July on a long-term deal.

If Mills and Perry cannot understand that, it further proves they lack a clue about building assets or executing a rebuild, and should seal their fate. The only assets this regime has acquired via trade have been by dealing the two best players to wear a Knicks uniform last decade. They have been nonexistent in minor deals.

Last season they were in a similar situation with Noah Vonleh and Emmanuel Mudiay at the deadline. Two players who were having strong statistical seasons on a team going nowhere that could have gotten something at the deadline. But the deadline came and went, and both stayed put and left for nothing at the end of the season.

The key difference in this season is that there is no dream to sell fans. In 2019 they had Kevin Durant or Zion Williamson to distract fans from a porous roster. In 2020, however, there is no big star they could sign or prodigal prospect to tank for—it’s just a porous roster again.

With nothing to spin, Mills and Perry have to make moves if they want to save their job, and they better be strong moves. Thus far the rebuild has consisted of poor personnel decisions masked by not making fatal mistakes (i.e. Joakim Noah, Tim Hardaway Jr.–level deals). Accomplishing the bare minimum should never be praised.

But the beauty of this is Mills and Perry can change the narrative. There is a clear path to a successful deadline. Morris should fetch at least a first-round pick, maybe more. Anything for Portis would do. Smith could quietly yield a nice return, as could Allonzo Trier.

What the front office cannot afford to do what they have done the first two seasons of this rebuild: nothing. So far doing nothing at the deadline has not worked. They are in the same exact position they were in last season. To expect a different result this time around by doing the same thing, would be, well, insane.