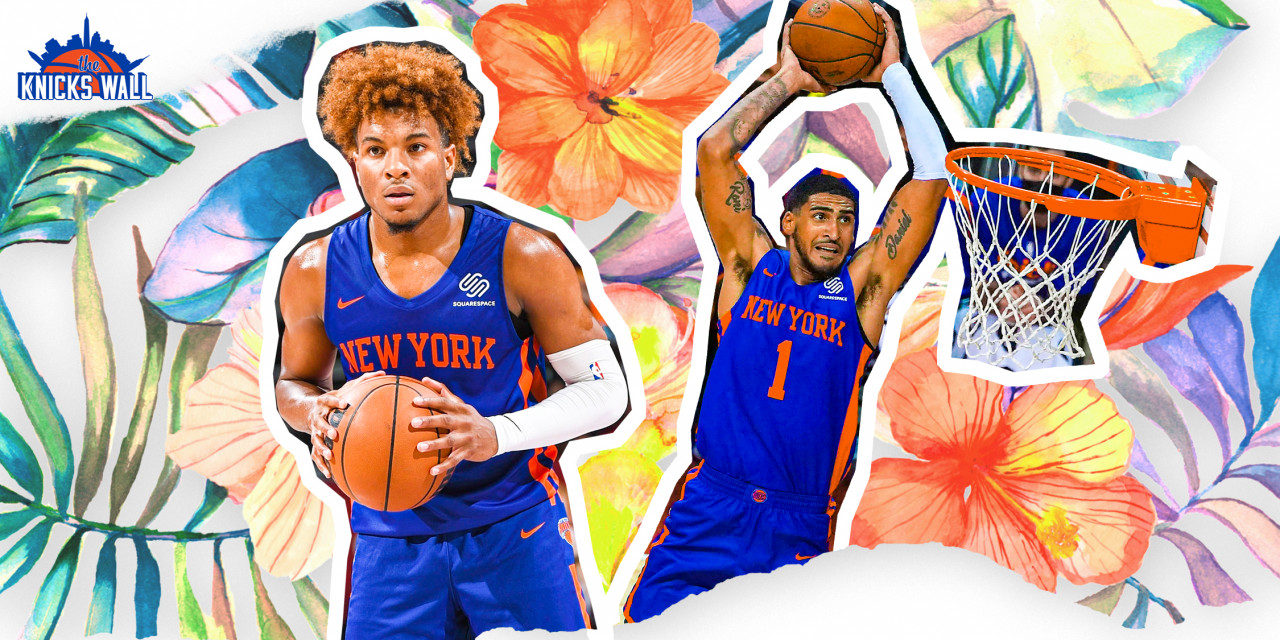 After a solid performance in Summer League, the future of the New York Knicks looks brighter than ever, especially with standout showings from Obi Toppin and Deuce McBride.

The NBA Summer League is like the preseason in any sport. Even though the outcomes of these games don’t guarantee anything, the Summer League is a good way to see what you’re going to get out of rookies and young players. You can see players’ strengths, weaknesses, and how their games will translate (or not translate) to meaningful NBA minutes.

Of course, you have your Kevin Knoxes of the world, who light up the Summer League with crazy highlights and then fail to produce at the NBA level. However, you also have your Mitchell Robinsons of the world, which make it clear that they were great value picks and can have an immediate impact come the regular season. You also get your second-year players, who can show what they’ve improved on since their rookie years ended.

Despite finishing with two losses in Las Vegas, this Knicks team was likely the best we’ve seen in some time. Multiple players on this team are going to have a big impact in the future. Here’s the outlook for each of them, starting with the second-year players.

Immanuel Quickley may not have had the most efficient Summer League, as he shot only 33.7% from the field and 24% from three, but it was a small sample size of only five games. Additionally, he did have a 32-point performance against the Pacers, where he shot 11-of-21 from the field and a 25-point performance against the Lakers.

It is definitely a possibility that Quickley’s shooting percentages were likely tied to being the no. 1 scoring option and the starting point guard, as there’s a learning curve to that. During Quickley’s rookie season, he mostly played shooting guard. However, Quickley showed that his playmaking ability is legitimate, as he averaged 7.8 assists per game, ranking second in the Summer League behind Boston’s Payton Pritchard.

Quickley likely won’t see many minutes at point guard this season for the Knicks given Kemba Walker and Derrick Rose are on the roster, but he did show that he’s capable of playing point guard. This is important in case Walker and Rose do get injured at some point. Additionally, it’s generally good for Quickley’s future with the team.

There’s no doubt that Quickley proved he should be playing more than 19.4 minutes per game this upcoming season.

This Summer League was much bigger for Obi Toppin than Quickley, simply because the forward struggled during his rookie season and has more to prove. Toppin did exactly what you would want him to do, averaging 21 points and 8.3 rebounds while shooting 44.5% from the field and 34.3% from three, and 88.9% from the free throw line. His best game came against the Pistons, where he had 31 points and nine rebounds, shooting 13-of-20 from the field. His performance in Vegas was good enough to earn him a spot on the All-Summer League First Team.

Toppin was definitely a player who was hurt by there being no Summer League in 2020, as it took him a while to adjust to the NBA during his rookie season. The playoffs were probably the best basketball Toppin played all year, which shows how long it took him to get acclimated.

I cannot emphasize enough how important this shot can become for Obi pic.twitter.com/cv7usLW8sY

During these six summer-league games, Toppin looked like what we expected him to look like his rookie season. He was aggressive, a solid three-point shooter, and can jump out of the gym. There are still definitely some parts of Toppin’s game that have to be cleaned up. He did have a few careless turnovers and seemed to struggle when his threes are heavily contested. That being said, Toppin did look like he’s starting to find his way, and his role and efficiency should be better in his second season. He should be instrumental as a backup wing or backup power forward to Julius Randle.

There were many people, myself included, who were not big believers in Quentin Grimes, especially where he was taken in the draft (no. 25). Grimes started the Summer League cold, as many of his shots were coming up short, likely because he was used to the college three-point line, which is shorter than the NBA’s.

Grimes averaged 23 points over his last three games despite the slow start, hitting 15 of his 32 three-point attempts, good for 46.8%. His 28- and 26-point performances to end Summer League were extremely impressive, as it legitimately seemed like every single shot he took was going to go in.

Quentin Grimes has such a quick trigger. It’s BEAUTIFUL. pic.twitter.com/OJYmdtxI4o

It’s unlikely that Grimes will see much time in his rookie season, but it’s also going to be extremely hard to keep him off the court if his shooting is as advertised. Grimes also gives the Knicks amazing depth at shooting guard. If R.J. Barrett or Immanuel Quickley miss games, Grimes will be no problem filling in some minutes.

Miles “Deuce” McBride hasn’t even played a regular-season game and might already be a fan favorite. McBride was the Knicks’ Summer League highlight, as the 36th pick averaged 15.2 points in just 27.7 minutes per game. He also shot an astounding 53.2% from the field, 50% from three (on 6.0 attempts per game), and 87.5% from the free throw line.

McBride wasn’t only a good shooter but was equally as good at creating his own shot. Point guards that can create their own shot were a huge need for the Knicks this offseason, and they certainly got one in McBride.

What was even more impressive than McBride’s offense was his defense. McBride locked down every guard he faced in the Summer League, most notably Sharife Cooper of the Hawks in the final game. His defense is so good that it’s likely amongst the best on the team already. He’s the type of player who will guard the opposing team’s best player in the future. It’s evident why Tom Thibodeau and the Knicks front office wanted to draft McBride. He perfectly fits the definition of a “Thibs guy.”

However, like Grimes, McBride will be stuck behind two others on the depth chart, in this case, Kemba Walker and Derrick Rose. However, Walker and Rose are two players who will likely miss time at certain points throughout the season, when McBride will see his first opportunity. When that time does come, the Knicks should have no hesitation about McBride being ready. He already looks like he could be a massive steal of this draft.

The Knicks using their 58th pick on Jericho Sims was exactly what you’d want out of a late second-round pick. Sims isn’t ready for the NBA yet, and will likely spend most of the season down in the G League. However, he showed promise and has a legitimate chance to be a backup center for the Knicks in the future.

Sims averaged 8.2 points and 8.2 rebounds in five summer-league games. He also shot 81% from the field. The most impressive part of Sims is his leaping ability. Every single alley-oop that Sims threw down was wowing, as his head is above the rim every single time he jumps. If Sims can develop a more polished offensive game, he could be an NBA player in a year or two.

Rokas Jokubaitis is a stash player for the Knicks, and as a result, he only played in three games, averaging 9.7 minutes per game. Despite playing limited minutes, Jokubaitis was efficient, shooting 70% from the field and 60% from deep. He also averaged 6.3 points.

It’ll be interesting to see his development continue overseas with Barcelona.

The big takeaway from the Summer League is that the Knicks have the deepest team that they’ve had in years. There are 13 guys on the roster that you can trust with minutes at the minimum. Additionally, the Knicks have done a great job of continuing to add talent to their young core. It’s so important that the Knicks keep hitting on these picks, as it’ll help the roster become better immediately and improve their future trade package in case a superstar becomes available at some point.

Furthermore, the Knicks have completely changed their draft strategy from reason years. Every player discussed above (aside from Jokubaitis) played multiple years in college, having multiple productive seasons. In the past, the Knicks focused on young age and potential. Now, the Knicks are taking these higher floor players, and it’s starting to pay off.

The regular season cannot come soon enough for the Knicks, as they have plenty of young talent to show off.