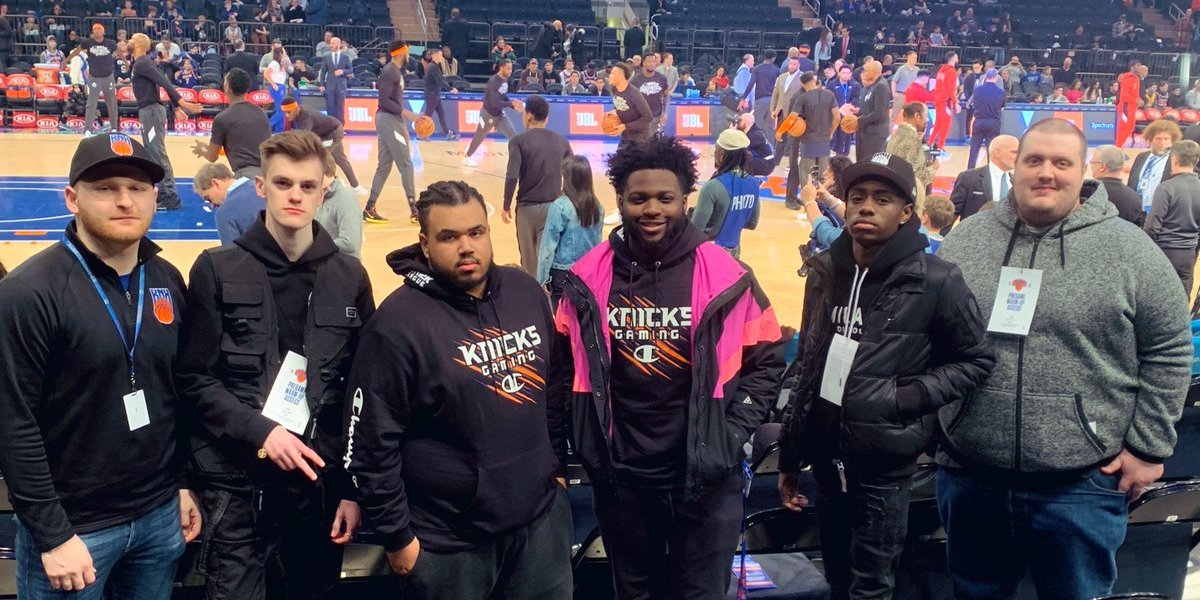 The NBA 2K League season starts in less than a month, and the hype for Knicks Gaming is brewing.

After what some are considering a stellar draft day for the Knicks, the roster is now set, and preseason training is soon to begin. I had the chance to speak with Knicks Gaming coach and team manager Kyle Rudy about the draft, the new players, and the upcoming season.

The Knicks Wall: I was interested in the scouting process. You guys had so many draft picks this year, it must’ve been an extensive process.

Kyle Rudy: Yeah, it was an extensive process, but it was an exciting process. Because, obviously, we have no players left from our championship team so it kind of was a full rebuild this year. We went into the draft needing the consensus two most important positions in the league at point guard and center, so it was kind of exciting spending those months scouting different players and seeing who to bring in to be franchise-type players.

TKW: That’s interesting because there are no players left from the original championship team. I was curious as to how you build new relationships with players, and how do you deem their personality to be a correct fit?

KR: I come from a 2K background— I watch a ton of 2K, play 2K and everything, so a lot of them I’ve known for a few years already. A lot of them I know how their personalities are with Twitch being so big, too, you see these guys playing every single night. You hear them talking in parties, communicating with their teammates. In between games, how they’re talking and having fun with each other. You kind of get to know them and their personalities every single night on Twitch so it makes it a lot easier than just going in blind, not sure of how they interact.

TKW: Yeah, you can just watch them and see how they are, just kind of just acting as normal people [on Twitch], but they’re also definitely waiting for a guy like you to call them and be like “Hey, wanna come play?”

KR: That’s part of the draft process too, once these guys qualify and are officially in the draft pool we get to set up official interviews, which, I really enjoy doing interviews and getting to give the guys one on one. Those were conducted by myself and [consultant] Jerry Ferrara. We were both in every single interview, and he helped me out, and those are all done over Skype so we get to see them, and ya know, are they going to show up in a shirt and tie, or in a polo, or just a crusty white t-shirt. You’d be surprised because that can stand out, people who come prepared like it’s a job interview versus people who take it as, “Oh, I’m just trying to play 2K for fun.” The guys that I had that I drafted all had incredible interviews and treated it like a serious job.

TKW: That’s really impressive from them because [Knicks Gaming’s second overall pick] Duck is what, 18 years old, but he seems so calm and collected as a person.

KR: Duck, he was one of our first interviews we did right away and as soon as he pops on the screen he’s got a big smile on his face with a shirt and tie on and everything. He kind of won us over in his first interview. He’s got this great personality, he’s a really intelligent kid and really has a passion for 2K. He just turned 18 so he just qualified. He spent the last two years waiting to turn 18, so this has been two years in the making now, that he’s been waiting for this opportunity and he took full advantage of it.

TKW: I found it interesting at the draft his interview versus [15th overall selection] CantGuardRob, because Duck was so quiet and reserved while Rob was talking his game up a whole bunch. It seems that’s going to be a good mix of personalities.

TKW: I asked [Rob] how he feels replacing Goofy at center and he said he felt like he could do it even better. I was curious to see how you feel about replacing Goofy’s incredible talent.

KR: Yeah, that was a tough decision to make for us, to actually do that trade because everyone know how incredible a player Goofy is, one of the best overall players in the league, not just at his position so from a production standpoint it’s gonna be hard to replace him. But Rob is someone who I think is up to the task. He was, in my opinion, the best center in this draft class, he’s very widely known as one of the best centers in the world. Once you get into the league it’s a different level, once it’s your job and you don’t have anything else to worry about, you don’t have to work so once he comes in we can watch film every morning, and I can help him get better and he can watch his own tape. He can put 100% of his focus on 2K. He’s someone I think who is coming in with an incredible skill level already and I just see him getting better and better every single week because he’s a hard worker.

TKW: Expanding on that but for the whole team, how do you adopt a new system for a team that has so many new players?

KR: After the draft they got to play together a little bit, they played some Pro-am together. It’s going to be a feeling out process and something we have until March 24th to figure out, it’s going to be a lot of trial and error through training camp and figuring out what we want our identity to be. This professional league build is different from the retail copy (of 2K20) so we’re supposed to be getting our hands on it today, so we can kind of feel our way through. You can go into training camp with one mindset of “Okay, this is how we want to play,” but we got to see exactly how the league build plays and what we think is the best way to attack it. That’ll be a feeling out process over the next few weeks before “The Tipoff” tournament.

Woke up this morning realizing this is really my roster for this year. Can't wait to get to work with these guys. Time to chase another ring https://t.co/WbUgRgrSQx

TKW: Speaking of identity, I felt like last years team didn’t find their identity until late, when they won a last string of games. In terms of identity, how do you find that quicker?

KR: That’s something I’ve been working on the last few years. Both seasons we haven’t had a good start to the year and we didn’t have good showings at The Tipoff, so that’s kind of a personal goal of mine, is to have my guys ready. That’s something I’ve been thinking over and seeing what I’ve done wrong, and what I can improve on in this process. It’s not just on the players, it’s on myself as well, to have them ready. Actually, on Monday we’re going to be flying out to Los Angeles to have our first week over training camp at the CLG (Counter Logic Gaming) facilities. So that’s how we’re setting the tone. Working with professionals, tapping into their resources every little bit, and being able to set the tone right away. [The players] are going to learn a little bit, see how their League of Legends team practices, and how they break down film, which is just a different level of professionalism and maybe something 2K players haven’t even seen. League of Legends is an established esport for years now, so we’re gonna get in there and see first hand right away how true esports professionals conduct themselves every single day. I think it will help set the tone, especially for a group of guys, who just drafted, are all hard workers and are really anxious to get going.

TKW: That seem like it will be helpful, seeing other esports and how they conduct themselves. Also considering how big League is, it is a true profession. And 2K right now is seen as smaller community, but is getting this amazing opportunity with the 2K League.

KR: Yeah, the league is still young obviously. A lot of these players don’t come from traditional esports backgrounds. A lot of them are basketball fans who played 2K so it’ll be good for them to see the other side of esports, the more traditional side of esports than what the 2K League is. Towards the end of the week, on Saturday we’re attending Riot Studios to watch CLG play Team Liquid, which will be a great experience for them. Malik (OriginalMalik) and Harry (HazzaUK) have been in the 2K League so they know what the 2K Studios are like, but they’ve never been to another esports event before, so it’ll be an introduction into another side of esports.

TKW: I was curious, for a last question, if your teams in the past, do they play other games (in the house) in down time, or maybe even competitively?

KR: Yeah, for sure. When it comes down to it, they’re all gamers. They’ve played a ton of Fortnite, Call of Duty, APEX Legends. Harry, he’s an incredible FIFA player, obviously coming from the UK that’s a big part of the culture over there. That’s how I kind of grew my relationship with him, in season one there were a group of us that would get off of practice and it would be myself, Adam (iamadamthe1st) who was on the team at the time, and we would play with two of Mavs Gaming players and their coach, and the Wizards Gaming coach. There was a big group of us that would all get together to play FIFA for fun. Our guys stretch across all games. I know they’re professionals at 2K, but they are pro gamers at everything they play. Since Malik moved in, he’s been playing Call of Duty. They love every aspect of gaming.