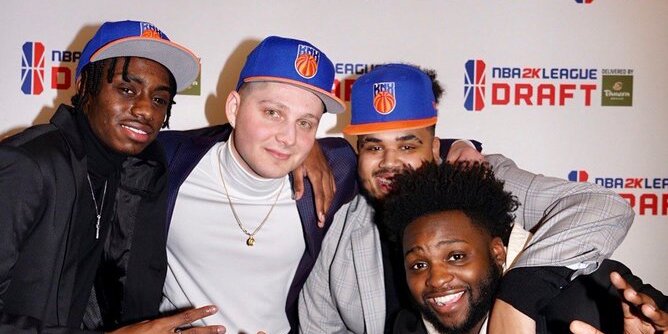 After a down year, Knicks Gaming attentively selected defense-first players in the 2020 NBA 2K League Draft, nabbing “Duck” at No. 2.

The NBA 2K League is back! The red carpet was rolled out in Hell’s Kitchen at Terminal 5 for the third annual 2K League draft, which featured 229 draft eligible players, with only 68 open spots to be filled. Players eligible to be drafted fought through a rigorous qualifier and combine process to get here, which involved multiple months of blood, sweat, and tears playing NBA 2K20.

For Knicks Gaming, New York’s affiliate in the league, tonight was the night to reshape most of its roster. In the offseason, the team shipped off their star center in Goofy757 in a deal to Grizz Gaming, which netted them the 15th and 36th picks in this year’s draft, as well as a first-round pick in 2021. The trade, coupled with point guard iamadamthe1st’s sudden retirement, meant the team was rebuilding after a massively disappointing showing in the 2019 season, going 4-12—one year removed from their inaugural title. The lottery balls fell in their favor, and they nabbed the second overall pick for this draft.

Will Beverina from Dimer2K asked Duck about the pressures of both a home town team and the global attention the Knicks brand draws in. “I wouldn’t say it’s pressure,” Duck answered. “I’d say its more like excitement. I’m excited to stay home.” Duck is a man of few words, and when asked more broad questions, draws back to the importance of leadership. His personality fits well for this Knicks Gaming team, who may that type of presence this season. Last year’s team struggled to find an identity until late in the schedule.

With the 15th pick in the draft, Knicks Gaming selected CantGuardRob, a center from Baton Rouge, Louisiana. I asked Rob what it’s going to be like filling Goofy’s shoes at center next season, and he said with confidence, “I feel like I can fill them, definitely. Maybe even better.” Rob will get the chance to live up to his expectations as the anchor at the five position, providing the defensive consistency the Knicks have been lacking.

With the 25th pick in the draft, Knicks Gaming selected BigRiM, from Newark, Delaware. Mark Hayworth, BigRiM’s alter ego, is known for playing defensive archetypes, and adds to the defensive talent the team went for in the draft paired with CantGuardRob.

New York’s last pick in the draft at no. 36 was Niko, hailing from Ontario, Canada. Brock Nikolakakos, a.k.a. Niko, is one of the 24 international players eligible this draft, and fills the final roster slot filled for this upcoming season.

Knicks Gaming now have their full team for the upcoming 2020 season. It’s OriginalMalik, HazzaHurst, BigRiM, Duck, Niko, and CantGuardRob. With no players left from their original 2018 championship team, the new kids on Knicks Gaming are hungry to prove themselves worthy of the former glory days of the esports squad.

We got our guys. Follow your 2020 Knicks Gaming squad ⤵️

This article was updated with the correct surname for Duck.