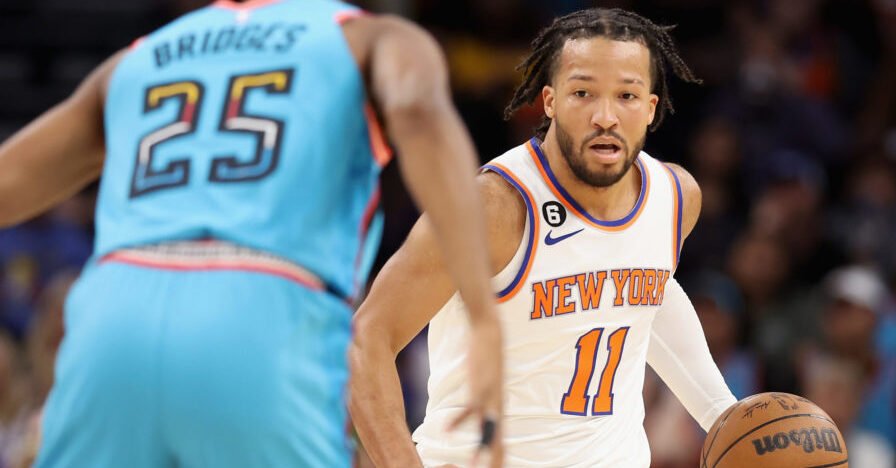 Knicks struggle to keep up with championship-tested Suns as Phoenix relies on role players for the big win.

The New York Knicks (8-9) continued their road trip out west with a matinee matchup against the hobbled Phoenix Suns (10-6). Missing Chris Paul (heel), Cam Johnson (meniscus), and Jae Crowder (diva), it seemed like the Knicks caught a break and could secure another W on this long west coast road trip. But Phoenix had other plans, as the Sun’s bench led the way, routing the Knicks 116-95.

Knicks drop one in Phoenix pic.twitter.com/U6aYGxuIZM

Throughout the first half, the Knick bench was the only reliable part of the offense. Pulling New York back into the game when the starters came out slow, Immanuel Quickley and Derrick Rose each had seven points in the first quarter to keep the Knicks within striking distance. The starters began to figure it out by the second half, with Quentin Grimes helping orchestrate the offense.

Jalen Brunson picked up the offensive burden when the game seemed to be slipping. He put on a midrange masterpiece in the third quarter, tallying twenty-seven points on the night. Keeping the game close with little to no help, Brunson could only carry the Knicks for so long before running out of gas.

Lacking the usual firepower at the top, Phoenix spread their offense out to beat New York. Every Suns starter was in double digits tonight as they found the mismatch and open looks wherever they presented themselves. Movement off the ball was one of the key factors for Phoenix’s success; New York struggled to keep guys in front of them throughout the game. After seeing some defensive improvements on this western road trip, the Knicks’ defense has been inconsistent to put it kindly.

Thrust into the starting lineup for the injured CP3, Cam Payne led the scoring for Phoenix with twenty-one points. Devin Booker chipped in twenty points along with knocking in five threes. Add in some extra offense from reserve Damion Lee, who dropped fifteen off the bench, and the game quickly became a blowout.

One bright spot was Quentin Grimes starting in place of Cam Reddish. With Reddish missing from the game (sore right groin), New York desperately needed defense in the starting uni and Grimes was able to leave his imprint on both sides of the ball. Notching ten points along with solid defense against Devin Booker, the best thing from Grimes was his shot creation for others. Grimes had eight assists and looked just as comfortable on the ball as he did in Summer League. Seeing this development from Grimes is a great sight as the Knicks need more ball movement in an iso-heavy offense.

Quentin Grimes is up to 9 points 3 rebounds 7 assists through 20 minutes. pic.twitter.com/fOeZOaPUQX

Quentin Grimes is up to 5 assists in the first half assisting on this Brunson three pic.twitter.com/2c8qjT4tVI