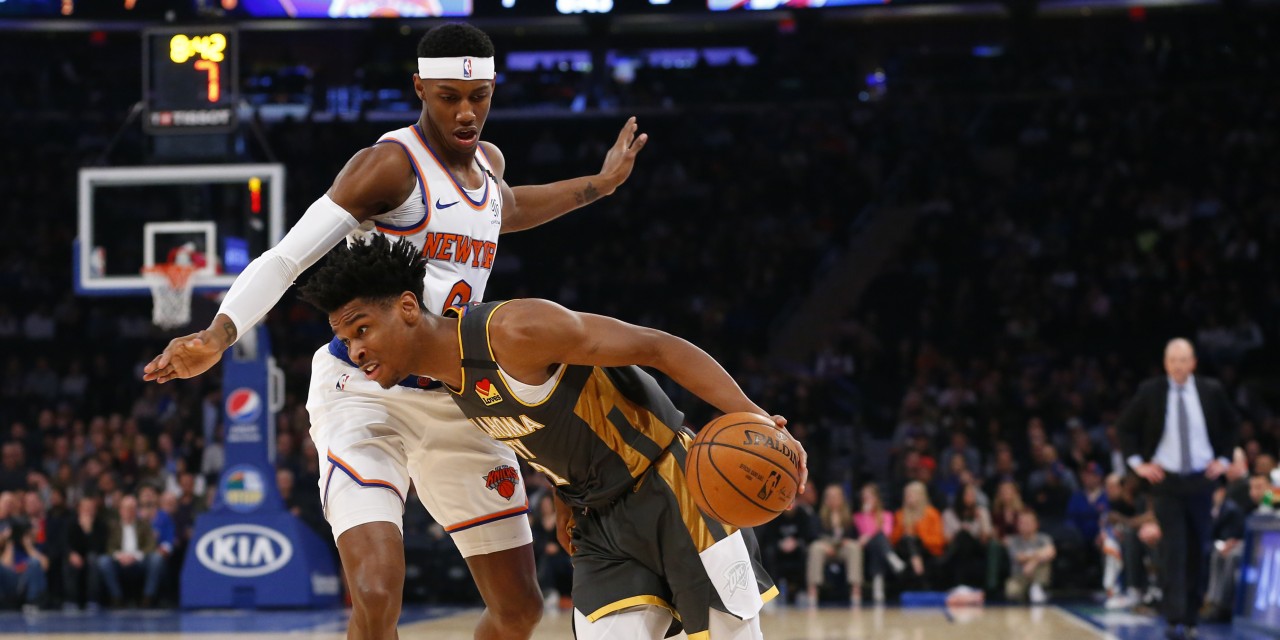 The Knicks have yet to lose in the year 2021. They continue a three-game homestand with the rebuilding Thunder visiting.

The New York Knicks (5-3) are high rollers, winning their third straight game on Wednesday in another comeback victory, this time against the Utah Jazz.

It’s the first time the Knicks are two games above .500 since December 22nd, 2017 (h/t Reuters). New York is feeling great under new head coach Tom Thibodeau who, despite several injuries to rotation players fewer than 10 games into the season, has secured a confident group keen on competing in any game and any situation.

Next up, the Knicks host the second of three Northwest Division clubs on Friday with the Oklahoma City Thunder (3-4) in town.

People said it before last season about the 2019–20 Thunder, but this group is a very different team. Since trading All-Star Chris Paul to the Phoenix Suns, OKC truly looks like a rebuilding team with little to no edge into postseason contention like the upstart squad last season, who grabbed ahold of a fifth seed in the West. Mark Daigneault, a first-time head coach in the NBA, went from UConn to Billy Donovan disciple at Florida, to OKC’s G League coach, to Thunder assistant, to now leader of the third-youngest team in the league (the Knicks are 0.2 years older).

The Thunder are led by third-year guard Shai Gilgeous-Alexander (from Canada), a crafty combo guard searching for consistent efficiency. Gilgeous-Alexander, an ex-teammate of Kevin Knox at—where else—Kentucky, is averaging 19.0 points, 4.6 rebounds, and 6.7 assists in 33.1 minutes per game but shooting 42.7% from the field and just 29.5% from three-point range while heaving 6.3 triple attempts a contest. That’s a 48.6 eFG% and a mediocre 53.2 TS% (via Basketball-Reference).

Another standout for OKC is bubble breakout star Luguentz Dort, who made headlines during the NBA’s Orlando, Florida, safehouse adventure for tough defense on James Harden and the Houston Rockets and averaging 12.5 points and 3.7 rebounds in the seven-game playoff series down at Walt Disney World. In 2020–21, Dort is shooting 50.0% from the field and 45.5% from three, putting up 13.4 points and 2.9 rebounds a game. The second-year Canadian wing could give fellow countryman R.J. Barrett fits.

The Thunder are also rounded out by a group of veterans traded in the offseason to the Sooner franchise. Big man Al Horford and point guard George Hill joined OKC in two separate deals and play in the mid-20s in minutes per game. Both at 34 years old, they are the oldest players on the roster (along with being older than anyone else on New York’s call sheet).

Here’s what to look for in the upcoming matchup.

The Thunder enter Friday’s meeting at Madison Square Garden with both the worst Offensive Rating (100.4) and scoring output (102 points per game). This could be a low-scoring affair, a pity for fans, perhaps, but Thibodeau must be salivating at stopping OKC from scoring.

The Knicks are only averaging 2.4 more points per game than OKC, along with possessing a bottom 10 offense, but they have a top-10 Defensive Rating and give up the third-fewest points per game to opponents (per NBA.com/Stats).

New York should be able to stop any Thunder attack cold in its tracks, especially since we have seen strong outings by third-year center Mitchell Robinson, now firmly entrenched as the franchise’s starting center, Barrett on the wing, and even better attentiveness from Julius Randle. The Knicks are not particularly getting their defense done with flashy numbers (fourth-fewest forced opponent turnovers, middle of the pack in blocks per game), but they are grinding out possessions with stronger communication and rotations. Additionally, the Knicks are top 10 in the league in rebounding percentage—a clear indicator of how the team is ending opponents’ offensive possessions without points scored.

Immanuel Quickley, where art thou?

Speaking of Kentucky, Immanuel Quickley only saw six minutes off the pine on Wednesday—his first scoreless outing, too, four games into the rookie guard’s NBA tenure. Quickley will get to see several Kentucky alums as the Thunder boast Gilgeous-Alexander, Hamidou Diallo, and Darius Miller; the Knicks have four former Wildcats (five, at one point, when Michael Kidd-Gilchrist was on the training camp roster).

Elfrid Payton played big minutes for the Knicks against the Jazz despite the point guard rotation’s status as probably the healthiest position group at the moment for Thibodeau’s squad. Payton logged 42 minutes in the win, scoring 22 points and dishing out eight assists. While the Knicks continue to win—and there is little argument against the winning ways—Payton’s minutes certainly can decrease, especially to hand the 21-year-old with three-point range the keys to the offense.

Quickley played the entirety of the fourth quarter in the Monday night win in Atlanta. He is certainly capable of not only earning minutes but playing winning basketball for Thibodeau and the Knicks.

Another guard to watch is Austin Rivers, whose 14 uninterrupted points for the Knicks shattered the Jazz on Wednesday for the comeback win. Rivers and Quickley paired nicely in the past, and the son of Philadelphia 76ers coach Doc Rivers has proven an innate clutch gene.

The Knicks are a banged-up team right now, which, ironically, has caused Thibodeau to keep a short rotation with players logging big minutes. One criticism that has followed Thibodeau across multiple NBA stops is his expected big minutes for starters. However, in this case just eight games into the season, the big minutes have come as a result of injuries like to backup center Nerlens Noel and veteran swingman Alec Burks.

Burks and Noel won’t appear on Friday, but it could see the first appearance of veteran big man Taj Gibson, who was signed by the Knicks and reunited with Thibodeau for the third time (the first two in Chicago and Minnesota). Gibson, of course, played for the Knicks during the 2019–20 season, actually starting the most games at center among last year’s roster’s bigs. The Brooklyn native was waived in the offseason until he was brought back this week, with power forward/center Omari Spellman waived to accommodate Gibson on the roster.

Gibson may not start again with Robinson at the 5, but the vet could get minutes backing him up with Noel out and Spellman waived.

The balance between Thibs’ minutes distribution and the necessity of big minutes for starters like Barrett, Randle, Payton, and Robinson amid ongoing injuries should continue to be monitored—especially if the Knicks keep winning.

»READ: While he waits for his chance to start, Immanuel Quickley should be Knicks’ closer

»READ: To trade or not to trade: the Alec Burks conundrum