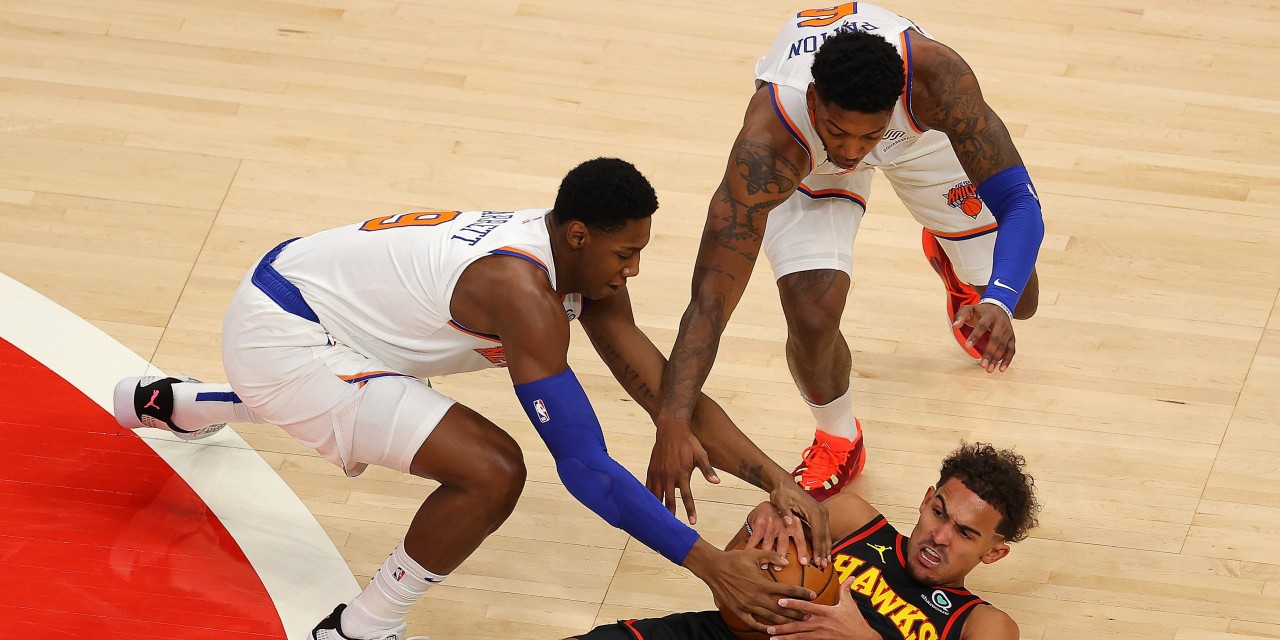 Rookie guard Immanuel Quickley was huge for the Knicks in a 15-point swing to take a comeback route in the road victory over the Hawks.

The New York Knicks (4-3) traveled down to the ATL to face the new-look Hawks (4-3) for their seventh game of the season and emerged victorious by a score of 113-108, after being down by as many as 15 points. Enjoy it, folks, we are witnessing a competitive and fun brand of basketball that we haven’t seen in a long while.

New York was lead by reinvigorated Julius Randle with almost another triple-double as he posted 28 points, 17 rebounds, and nine assists, per ESPN Stats. Not to be overlooked, by Randle’s monster evening was R.J. Barrett, who continues to dazzle in all facets of the game in his sophomore campaign, as he himself put up a double-double with 26 points and 11 boards.

Atlanta had one of the most active offseasons of any team, most notably adding European sharpshooters Bogdan Bogdanovic and Danilo Gallinari to the mix along with veteran point man, Rajon Rondo. Both Gallinari (ankle sprain) and Rondo (DNP-coach’s decision) did not see the floor and Bogie had a quiet evening, so a vast majority of the Hawks’ production was from their uber-talented young core.

Trae Young finished 31 points but was only 1-of-6 from behind the arc. Despite his scoring output, the Knicks did a good job containing Young, who has absolutely torched New York on multiple occasions throughout his young career. De’Andre Hunter added 23 for Atlanta as well.

Atlanta came into tonight’s contest shooting 40% from three—good for fourth in the Association, per NBA Stats, but the Knicks did an excellent job in defending the perimeter and holding the Hawks to 10-of-31 from deep. This was the type of game that previous Knicks teams might have let get out of hand and allowed Atlanta to go on a three-point barrage, but credit head coach Tom Thibodeau and his desire to drill defense into his guys, as they closed out well and didn’t allow many open looks from Young, Kevin Huerter, and company.

It cannot be overstated how much better Julius Randle looks under Thibs than under David Fizdale/Mike Miller last season.

Randle has looked like an All-Star under the new regime and has improved his defense, passing, and decision-making, all gripes Knicks fans had with him not too long ago.

Randle, to me, played his best, most well-rounded game of the season tonight and led the Knicks to as big of an early-season win as you can get against a good Hawks squad. Credit to Julius and credit to the coaching staff for putting him in a position to be successful and flex his strengths.

Immanuel Quickley showed all once again tonight why he should be the Knicks’ starting point guard and play way more than he has been early on in his rookie season. IQ helped spark the Knicks late in the third quarter and was instrumental in New York’s strong fourth quarter in a game where they were able to secure a tough victory.

Sure Payton is a more established player to this point, but in each passing game IQ is leaving Thibs less and less of a choice to give the rookie the keys to the offense.

The Knicks return home to face the Utah Jazz on Wednesday at the Garden.

»READ: The Mavericks’ picks give Knicks chance to add another Immanuel Quickley talent