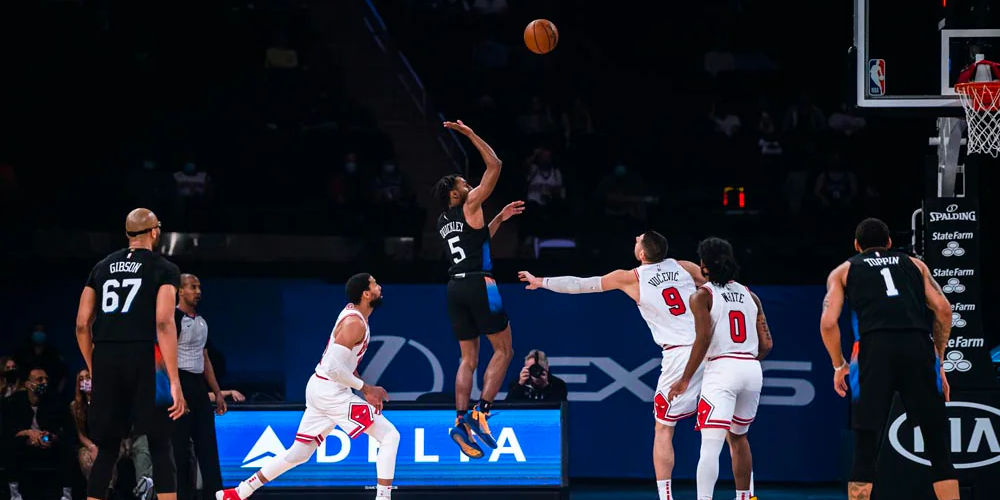 Spurred on by a fourth-quarter rally from Immanuel Quickley, the Knicks took down the Zach LaVine-less Bulls on Wednesday night before New York goes on a six-game road trip.

After seeing their nine-game losing streak snapped at the hands of the Phoenix Suns, the New York Knicks (35-28) bounced back tonight in impressive fashion, defeating the Chicago Bulls (26-36) by a score of 113-94. It was a back and forth contest for the first three quarters, but the Knicks ultimately pulled away in the final frame outscoring the Bulls 37-19, per ESPN Stats. Tonight’s victory marks the second time in three games the Knicks have defeated their Eastern Conference rival.

The Knicks’ two big guns, Julius Randle (34 points and seven rebounds) and R.J. Barrett (22 points and seven rebounds), did damage this evening and helped get the ‘Bockers back in the win column. Reggie Bullock and Immanuel Quickley each chipped in 13 apiece to help the cause. To boot, bench favorites Theo Pinson, Norvel Pelle, and Jared Harper saw some floor time late in the game, which gave the MSG crowd some juice.

On the other side, Nikola Vucevic had a monster outing with 26 points and 18 rebounds, but it wasn’t enough, as the Bulls fall even further back in their quest to secure a spot in the play-in games. Clearly, Chicago was missing All-Star Zach LaVine, who missed his eighth straight contest due to health and safety protocols.

Rookie Obi Toppin has not contributed much this season, but each game it seems like there is progress in the right direction and recently he has been more electric, less timid, and willing to be aggressive, particularly offensively. The box score isn’t going to blow you away (four points, one rebound in 11 minutes), but watching Toppin, you see he is becoming more and more accustomed to being on an NBA floor and his increased comfort carries over and shows on the bench, where he is an excellent hype man and always into the game.

The above clip sums up Toppin’s relentlessness and flashes like these show you why the Knicks chose him eighth overall. Once he becomes more fearless and experienced, we will likely see a giant leap from the 23-year-old.

In a night where Derrick Rose just simply didn’t have his A-game, shooting 2-for-11 from the field for six points, Quickley and Elfrid Payton had solid games, as they scored 22 points combined compared to only two turnovers. There has been much scrutiny surrounding Payton’s play and rightfully so, but tonight he played within himself and did enough to help guard play out and bring the Knicks to victory.

Quickley in 16 minutes was decent but brings tremendous energy and swagger that is unique and he always seems to make timely shots and is able to contribute without lighting it up. I.Q. has proven himself as a late first-round steal and it is incredible to see his impact go beyond the box score this soon in his career.

The Knicks are back in action Sunday in H-Town against the Rockets at 8 p.m. ET.

»READ: Julius Randle has been the offensive engine for the New York Knicks