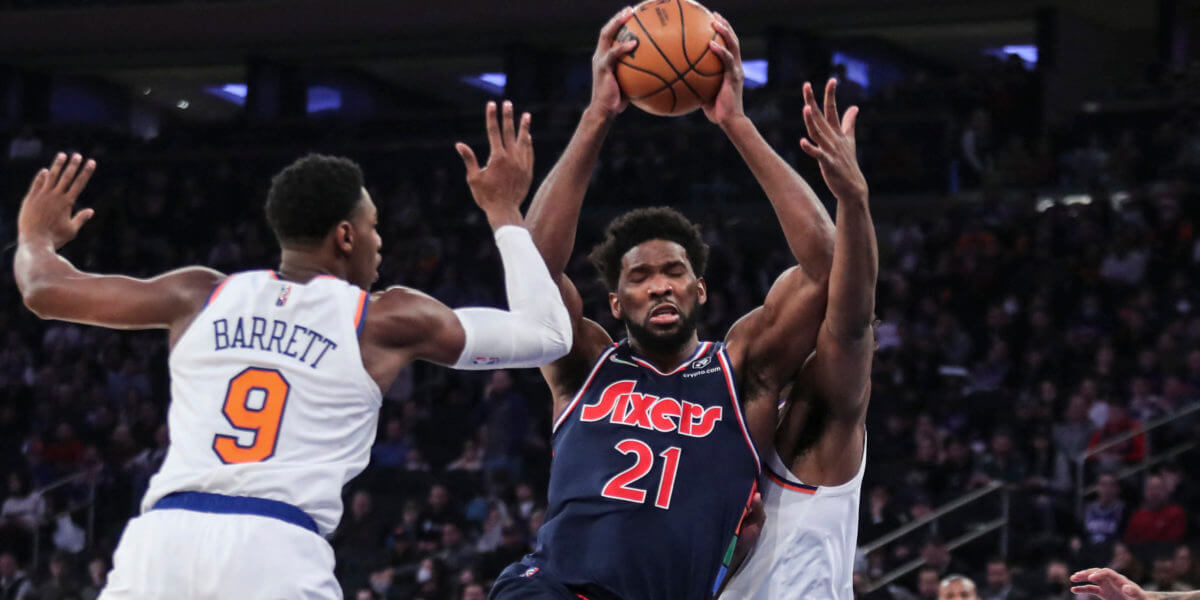 Joel Embiid and James Harden utterly annihilated the Knicks as New York and Philly combined for 79 free-throw attempts in the matinee matchup.

The New York Knicks (25-36) continue to their downward spiral with today’s loss against bubbling Eastern Conference powerhouse Philadelphia 76ers (37-23) by a final score of 125-109. New York has now won only once in their last 10 games, holding onto play-in hopes by a thread as they fall deeper in the conference standings.

Today’s loss had some good, some bad, and some ugly. So let’s get into it.

For starters, the Knicks did themselves no favors turning the ball over as much as they did. The poor ball security was an issue early and often to start the game, and that trend continued until the final whistle. The Sixers were getting out in transition converting those turnovers into points all day. In the first half alone, New York turned the ball over 11 times, and the Sixers were able to turn those extra possessions into 17 points.

The Sixers are definitely a good defensive unit, but a lot of the Knicks’ turnovers were ill-advised passes and overall sloppy play. Each team was successful in getting to the line, but Philadelphia converted on 17 of their 21 attempts, while New York only made 10-of-20 in the first half.

The sloppy ball security continued in the second half for the Bockers. New York ended the game with 18 turnovers, eight more than the Sixers, and the Sixers converted those 18 turnovers into 22 points. The Knicks were only able to generate 11 points off of 10 Sixers throwaways. The turnovers, along with the free-throw discrepancy, were major contributors to today’s loss.

Well, on the Sixers’ side, Joel Embiid and James Harden are already quite the tandem. Sounds obvious, but in their second game together the stars’ pick-and-roll partnership already is devastating. If you over help on Harden, Embiid rolls into the open space either in the paint for an easy bucket or to the foul line extended for a pick-and-pop. If you overhelp on Embiid, Harden is a master in floater range and at drawing fouls.

And that’s where the newfound duo’s value really lies, their ability to draw fouls is something to behold. Joel Embiid almost single-handedly fouled out both Mitchell Robinson and Jericho Sims, and had a career-high in free throw makes and attempts today with 23 and 27, respectively. Harden made all 10 of his attempts. Together, Embiid and Harden shot 33-of-37 from the charity stripe, a trend that will surely continue as their chemistry improves.

The Knicks were forced to go small to end the game with their starting and backup centers each fouling out, and the Sixers took advantage of the lack of rim protection for New York.

RJ Barrett continued his struggles at the line, but the level of confidence and the newfound pace he is playing with is incredible to witness. In the last 30 days, he has gotten co-signed by two of the league’s brightest stars in LeBron James and Jimmy Butler due to his performances against the Lakers and Heat, but he needs to make his foul shots. That’s certainly the next hurdle he needs to get over in his development. But man, his growth as a scorer and playmaker off the dribble has been sensational, even in a half he struggled to score efficiently.

RJ Barrett continues to get to the rack at will, you love to see it pic.twitter.com/2SWUKkx0aI

In the second half, he kept that same level of aggression going to the rim and found a ton of success, no matter who was guarding him. His jumper wasn’t falling, but that didn’t stop the Canadian from putting his stamp on the game. He ended the contest with 24 points, five rebounds, and six assists while getting to the line 10 times.

Barrett only converted on six of those 10 foul shot attempts. This is coming off of a poor 13-of-22 performance from the foul line in Friday’s contest against the Miami Heat, a game in which he dropped a career-high 46 points. The third-year rising star mentioned after the game that after practice ended, he stayed after and made 200 attempts. His awareness of his need to improve in this area, along with his work ethic should give Knicks fans all the hope in the world that’ll be the next step in his development. But, coming into the year, the Knicks wanted to see him develop as a scorer and playmaker off the dribble, and he certainly has.

Knicks lost but if you rode with us, you cashed out 🔒💰 https://t.co/qRsQcwiNkv

The Knicks kick off a seven-game road trip during March Madness, starting with a rematch on Wednesday in Philly.

»READ: What’s the point? Knicks need to do something at point guard

»READ: ​​Does Tom Thibodeau have long in New York?