Knicks Have Chance to Overtake Hawks With Critical Matchup 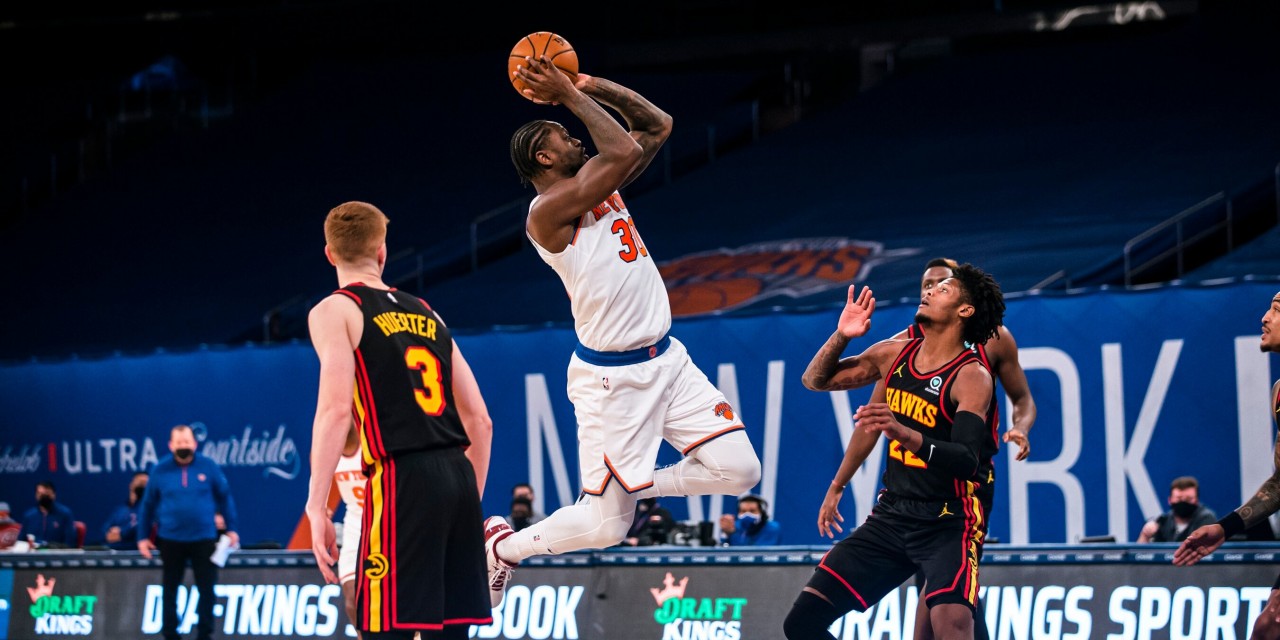 Winners of seven consecutive games, the Knicks host the Hawks for the second night of a back-to-back as they make their way up the Eastern Conference standings.

How far can they go?

The New York Knicks (32-27) continue to roll, entering Wednesday’s matchup against the Atlanta Hawks (32-26) with a seven-game winning streak, after a win on Tuesday over the Charlotte Hornets.

Atlanta is looking to start a winning streak of its own, after picking up back-to-back double-digit victories over Orlando and Indiana.

Much with Atlanta starts and ends with star point guard Trae Young, who’s averaging 25.4 points per game (tied for 13th in the NBA) and 9.5 assists per game (third in NBA).

Between his shooting and scoring ability, plus his court vision and passing, he’s the clear catalyst for the Hawks. The Knicks will have to stop or slow him down in order to continue their winning ways. In the two earlier meetings this season, they had done just that.

New York made it difficult for Young in its first game against the Knicks, limiting him to just 9-of-22 shooting, including a 1-of-6 clip from long range. Young still finished with 31 points, but more than one-third of those came from the free throw line. He also dished out 14 assists and got his teammates going, but gave up eight turnovers.

In both games, the Knicks were able to limit his scoring efficiency, especially from the three-point line. With just a combined 2-of-10 showing from deep, he was a non-factor from long range.

They also contained the Hawks from the perimeter overall, holding them to a combined 21-of-64 (32.8%) mark at the three-point line as a unit.

Limiting Young and the Hawks from the perimeter will be the key to victory a third time around, much like the first two meetings.

Outside of Young, with injuries to De’Andre Hunter and Cam Reddish, Atlanta has been longing for consistent secondary scoring options. John Collins is the next scorer after Young, with 18.0 points per game, but it’s been mostly dependent on who’s hot in any given game. The Hawks recently acquired sixth man Lou Williams in hopes to provide a scoring punch off the bench. He’s only averaging 11.1 points per game, but he is coming off of a solid 22-point game.

It will be interesting to see if Immanuel Quickley and R.J. Barrett can build off of Tuesday night’s performance.

The month of April hasn’t been kind to Quickley. The first-year guard is averaging just 7.2 points per game, the lowest out of any other month this season. However, he showed glimpses of getting his mojo back on Tuesday, scoring 17 points and shooting 4-of-7 from long range. After finally running into the rookie wall, could this be the start of him getting over it?

1st of 2 back to back threes for RJ Barrett 🤫 pic.twitter.com/JtETvBhcxl

As for Barrett, it had been an up-and-down last couple of weeks, but he netted 24 points for the second time in three games. It was a bit of a slow start before he heated up and finished strong against Charlotte. It was a much-needed performance, especially on a night where it seemed like Julius Randle finally cooled down.

Speaking of which, expect a bounce-back game for Randle. An off-day was bound to happen at some point, but it’ll be hard to picture that happening again against the Hawks.

According to ESPN Stats, he averages 36.0 points per game against the Hawks, the highest for Randle against an NBA team. He’s also shot 61.0% overall against them, with a 38.9% mark from beyond the arc, and 13.0 rebounds per game to boot.

Eight? Would be great

The winning streak is nice and all, but there’s more to it than just being the longest since 2013.

With the Knicks currently fifth in the Eastern Conference standings, plus a half-game behind the Hawks, this could be a pretty important win for both teams as they make their playoff push. There’s less than a month to go in the regular season.

A win would move New York ahead of Atlanta into fourth, which is remarkable.

The way the Knicks have continued to win during this stretch is also interesting, from the consistent defense all throughout, to blistering three-point shooting performances, to scraping by whehn shots aren’t necessarily falling as a team. From being carried by Julius Randle, to finding a way to win when their best player was struggling.

The backbone of the Knicks’ success this season has always started with their defense, but the variety during this streak is certainly impressive.