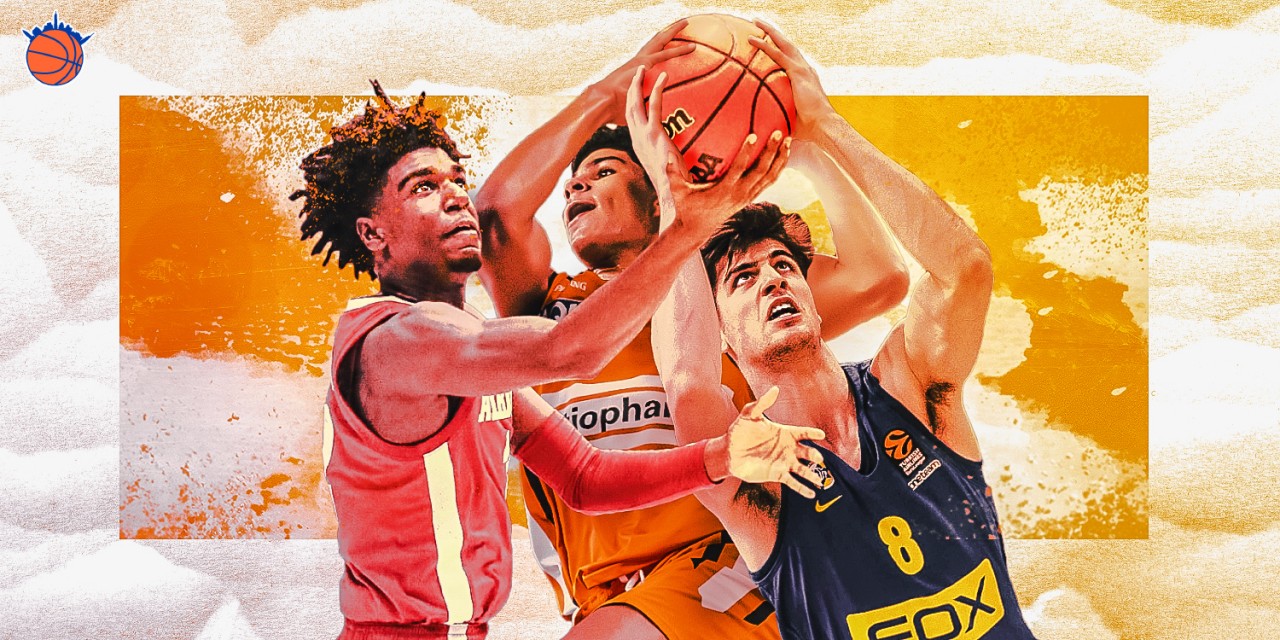 The Knicks will in all likelihood fall short of a top-five pick in the 2020 NBA Draft, but their pick cache could come in handy with the available talent.

If the 2019–20 NBA season were to be officially canceled due to the COVID-19 pandemic, the New York Knicks would finish the season with a record of 21-45, good for the sixth-worst record in the league. According to Tankathon, the Knicks would have a 37.2% chance of obtaining a top-four pick and a 9.0% chance of winning the number one overall pick.

It’s a familiar spot for the Knicks, with the selections of Kevin Knox at no. 9 in 2018 and Frank Ntilikina at no. 8 overall in 2017. In total, it would be the fifth lottery selection in the last six seasons for the Knicks—suggesting that the ‘Bockers should probably be closer to contending for a playoff spot rather than continuing to sit behind the podium in Secaucus, New Jersey, every May.

Despite needs all over the roster, the Knicks shouldn’t look to move up in the 2020 NBA Draft, even if they fall down a few selections in the lottery.

The NBA draft was best seen as a mystery, even before the cancellation of the NCAA tournament. No one really stood out and top prospects either left college early to prepare for the professional level (Memphis center James Wiseman) or had poor seasons (North Carolina guard Cole Anthony). Because of the uncertainty, the top of the class lacks an ideal top guy, making the first few picks a complete crapshoot.

However, the one thing we do know is that New York will have a chance to add the point guard of the future, thanks to a loaded lead-guard class. Between Anthony, LaMelo Ball, Tyrese Haliburton, R.J. Hampton, and Killian Hayes, the point guard market is stocked with options. The Knicks will have several chances to add to the backcourt alongside R.J. Barrett for the next decade.

The Knicks are reportedly high on “scoring guards” at that point guard position, ideally Ball and Anthony. Ball, the younger brother of Lonzo Ball, went to Australia’s NBL instead of college and had a solid season. For the Knicks, he’d be an interesting option as an offensive orchestrator. As for Cole Anthony, he dealt with spacing issues and injuries at UNC, but still has the profile of a solid shooter and can also handle and create at the lead guard spot.

Or, in the event the Knicks fall to seventh or eighth overall and the point guard class dries up, New York should select the best talent available. Deni Avdija is a do-it-all forward with formidable upside to be more. Devin Vassell is a big wing who shot 41.5% from three at Florida State and looks like an ideal 3-and-D wing. Tyrese Maxey is an elite slasher and could be the dynamic guard to play alongside a Barrett tasked with creating and operating offense.

Last year, ESPN had the Knicks draft needs listed as “everything,” and after using the third overall pick on Barrett and nearly $70 million in cap space on veterans, that need still holds true. As such, the Knicks should be open to pretty much everyone in the top 10, outside of James Wiseman and Obi Toppin, which means they should try to stay in their draft slot and take either the best point guard or best wing player.

The second first-round pick, projected 27th overall, is where the Knicks could get creative. With three picks in the draft’s first 40 selections, the Knicks have some flexibility in who they can take. Sure the Knicks can stay put and take someone at 27 and 38. Or, the Knicks could be aggressive and move up in the first round for better talent.

The first is Kira Lewis Jr. Lewis is a 19-year-old sophomore point guard who looked great at Alabama, averaging 18.5 points, 5.2 assists, 4.8 rebounds, and shot 36.6% from three. He’s still pretty young, so while he might not be a day one starter, he gives the Knicks an upside play at point guard. Ideally, New York could select Lewis in the middle of the first and still bring in a veteran guard, and thus, create some unfamiliar depth to the position. If the Knicks decide to skip point guard with their lottery pick, Kira Lewis would be an ideal snag in the middle of the first round as their point guard of the future.

The second is Colorado wing, Tyler Bey. Bey is a 6-foot-7 combo wing who can defend either forward position, or even step out to the perimeter and pester a few guards. He shot 41.9% from three, but he only took 31 total attempts this past season. He has warts, including his draft age (22.3), but Bey could follow the path of former Colorado wing Andre Roberson and offers a team an elite defensive talent on the perimeter.

Some other options who stand out are Vanderbilt’s Aaron Nesmith (elite wing shooter, injury concerns), FC Barcelona’s Leandro Bolmaro (smooth wing who can create off the bounce) and DePaul’s Paul Reed (power forward, but 5.0 steals plus blocks per 36 this past season).

It’s all about combinations of talent in this case. Would you like Killian Hayes and Aaron Nesmith, the best point guard in the class (for my money) and a knockdown shooter? What about Devin Vassell, Lewis Jr., and a 3-and-D wing and explosive guard? Deni Avdija and Tyler Bey to go all-in on the defensive upside? There are options there for the Knicks, and adding two good talents to the likes of Frank Ntilikina, Barrett, and Mitchell Robinson could assist in creating a direction for free agency.

With several draft picks and several needs, the New York Knicks can truly make some moves to come away with solid talent. With their lottery pick, New York should look to stand pat, thanks to the litany of talented options at the top of the board. An about their second first-round pick? That’s where the Knicks should look to be a bit aggressive if the right player is on the board.