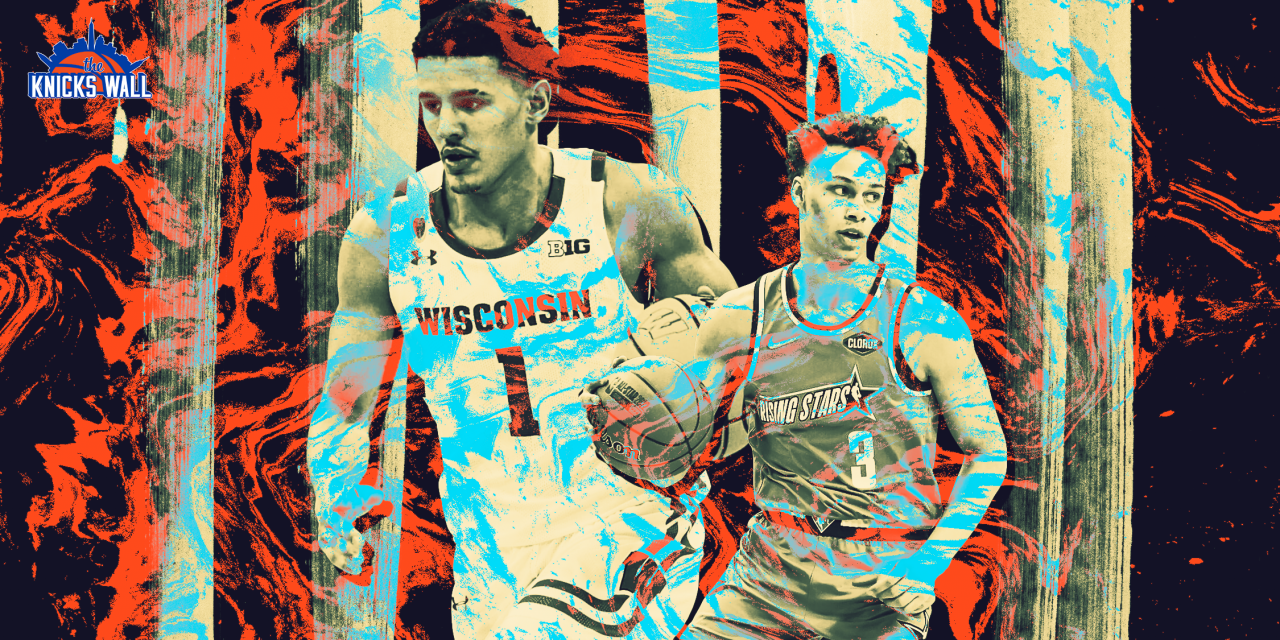 Trade up or down? With the order set for the 2022 NBA Draft, the Knicks possess the 11th overall pick, a precarious spot for a franchise teetering on playoff mainstay.

It could have been worse.

The New York Knicks received the 11th pick in the upcoming 2022 NBA Draft, which is right where their chances had them landing. They were represented at the lottery by the team’s executive vice president and senior basketball advisor William “World Wide” Wesley.

Last season, New York selected sharpshooting guard Quentin Grimes and a stalwart on defense in Miles “Deuce” McBride in the first and second round, respectively. They were also able to get a solid backup center in Jericho Sims in the second round and stash pick Rokas Jokubaitis.

The season before that, the Knicks drafted Obi Toppin, a flying wing who finally looked ready for bigger minutes this season, at eighth overall. Immanuel Quickley, a potential candidate for the starting point guard role this upcoming season after a solid second season with the team, was grabbed with the 25th pick.

While none of those aforementioned players clocked much time with notoriously sparse minutes under coach Tom Thibodeau, they made their presence known throughout the season when they were given the opportunity, showing that the front office can have success with picks lower down in the pecking order.

The big question for the Knicks now is what to do with their 11th pick.

There are several roles that the Knicks could look to fill with their positioning in this year’s draft. An obvious hole can be found at point guard, a position that has remained a huge question mark for the team after Derrick Rose went down with an injury for much of this previous season, and with Thibodeau still not showing much confidence in Quickley’s ability to be New York’s starting floor general. Alec Burks was the de facto point guard for much of the season, but he looked uncomfortable with the role and was better suited as a catch-and-shoot guard.

This draft is sparse when it comes to talent outside of explosive and savvy forwards and centers, but there are a few guards to be sought out if the Knicks are looking to get security in case they strike out in their efforts to search for a starting point guard amongst the free-agent class. One that the Knicks should be clamoring for is Dyson Daniels. A G League Ignite product, Daniels averaged a respectable 11.3 points, 5.9 rebounds, and 4.4 assists per game. TyTy Washington is another prospect for New York at point guard if he were to fall to 11. Washington averaged 12.5 points, 3.5 rebounds, and 3.9 assists per game during his 2021–22 campaign with the Kentucky Wildcats. If the Knicks are very lucky, though, they can end up landing a solid scorer in Bennedict Mathurin. With the Arizona Wildcats this year, Mathurin went for 17.7 points per game along with 5.6 rebounds but just 2.5 assists. New York needs a guard willing to push the pace with good court vision after finishing second-to-last in pace this past season. Any three of these prospects could help to change that.

The center position could also prove troublesome for the Bockers. Mitchell Robinson, who is a free agent heading into this offseason, might opt to sign elsewhere with teams having already shown interest in the big man. The Knicks have a few so-so options, and one big name option in the Suns’ star center Deandre Ayton, to go to if they wanted to move on from him and from Nerlens Noel, who did not play much at all this season due to injury.

They can also choose to bolster their young core at the position with a pick from the center pool in this year’s draft. Some options include Jalen Duren out of Memphis or Arizona’s Christian Koloko. Duren is likely to go early on after averaging 12 points and 8.1 rebounds per game with the Tigers this year. Koloko seems likelier to be available when the Knicks pick at 11. He went for 12.6 points per game along with 7.3 rebounds as a member of the Wildcats. This is all, of course, all dependent on the Knicks getting lucky and seeing either of these players fall into their lap at 11.

The Knicks would undoubtedly need to give up players like Quickley, Toppin, and Julius Randle, along with a potential package of future first-rounders, to trade up given their current assets, or lack thereof. It’s unlikely they are so infatuated with a player that they decide to make this move, but if they did, they’d likely be doing so for the chance at a higher-ranked guard like the athletic options in Shaedon Sharpe or Jaden Ivey. Sharpe is considered a risky option, as he did not play in the 2021–22 season with his college team, the Kentucky Wildcats. He declared for the draft while Kentucky is still seeking to retain him for their 2022–23 season. Ivey had an impressive run with the Purdue Boilermakers this past season, averaging 17.3 points per game with 4.9 boards and 3.1 assists. Either of these guards would be a huge upgrade to a roster already hosting a quick floor runner in both Quickley and Toppin, and one with a veteran like Rose to anchor the bench.

The only center that’d be worth trading up for is Chet Holmgren. With the Gonzaga Bulldogs this year, he nearly averaged a double-double having recorded 14.1 points and 9.9 rebounds per game along with 3.7 blocks. Holmgren is likely going off the board with the first, second, or third pick in the draft (so, to the Orlando Magic, Oklahoma City Thunder, or Houston Rockets). All three teams are in rebuild mode, so it’d be interesting if they gave up the right to a potential star in Holmgren in exchange for a player like Randle or for role players like Quickley and Toppin.

Trading down or out

The Knicks have been mentioned quite a bit in trade rumors surrounding Donovan Mitchell, the star guard currently playing with the Utah Jazz. After a disappointing playoff campaign that saw the Jazz being eliminated by the Dallas Mavericks, Mitchell was candid about the uncertainty surrounding his staying with the team next season and beyond.

Lindor chatting up Donovan Mitchell at the Mets game 👀 👀 👀

While the 11th pick isn’t the flashiest piece to offer to Utah alone for Mitchell in return, it’s certainly a sweetener for the Jazz to consider alongside additional current roster pieces, specifically younger players on the team. It’d be hard to part with some of the Knicks’ young core, especially as it looks like their development is finally starting to provide a positive impact on the team, but sacrifices would have to be made if New York sought to trade for a bona fide All-Star in Mitchell. And, to have such a stockpile of young players and to keep the 11th pick might not be in the best interest of this particular Knicks squad, as they’re not in a rebuild mode and they are under the helm of a head coach who has a preference for playing battle-tested players over rookies in need of playing time.

This option, on paper and in the hearts of many Knicks fans clamoring for a star in the Garden alongside RJ Barrett, seems the smartest for the Knicks. While some prospects in this draft class seem destined for greatness, the Knicks are looking to respond after a lackluster season. To do so, they’d need to dole out this pick.

The Knicks are not in a bad position. What will put them in a tough spot, though, is mismanagement of this pick and their current core. New York’s front office is now on the clock.

»READ: Shaedon Sharpe is the biggest home run swing in the 2022 draft