Knicks Have to Solve Trae Young Puzzle, Get Randle Going After Letdown Game 1 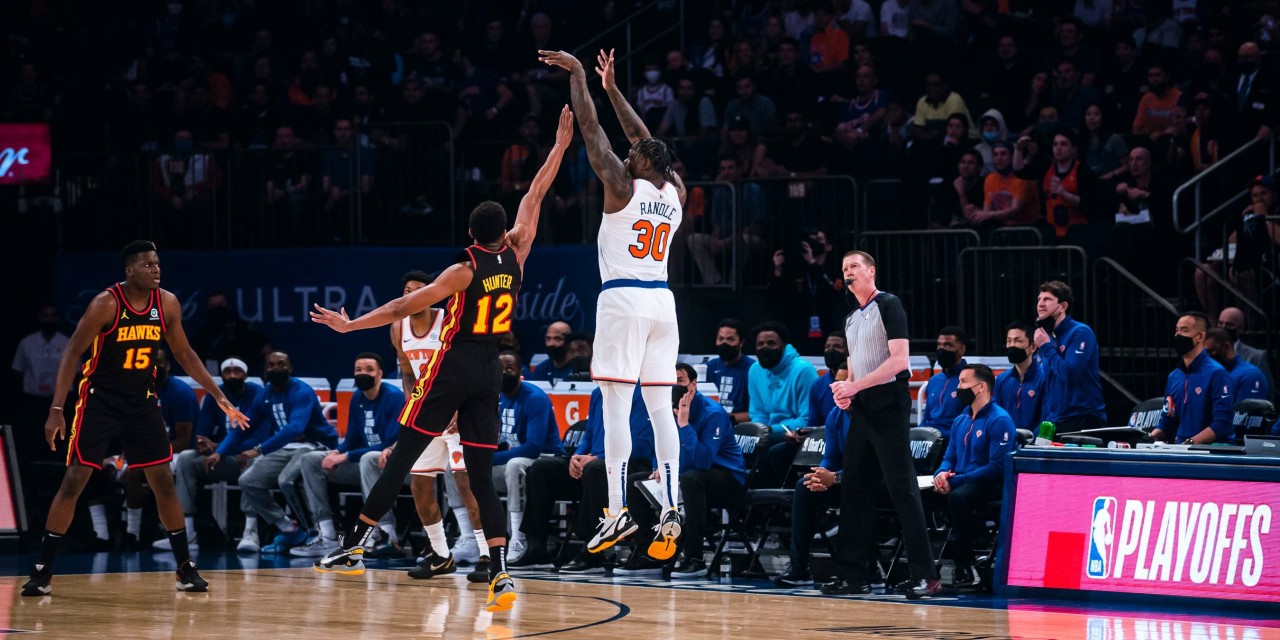 The Knicks’ return to the postseason resulted in a nail-biting, heart-wrenching loss to the Hawks. To even up the series, they’ll need to find a way to get Julius Randle back into his star form and hinder Trae Young’s ability to do so.

NEW YORK, NY — The New York Knicks and Atlanta Hawks brought the first game of their first-round series down to the wire. As evidenced by their three regular-season contests, all these teams know when facing each other is to go punch for punch for four quarters and then find enough energy to pull ahead as the clock nears all zeros. That theme was extra prevalent on Sunday night.

After fighting through 10 lead changes in front of an immeasurably energetic Madison Square Garden crowd, Atlanta came away victorious by a score of 107-105. There were two key factors that led to New York’s downfall, both of which were the performances of each team’s marquee player. Julius Randle had a tough time connecting on shots in his playoff debut while Trae Young rose to the occasion.

Young, simply put, had his way with the Knicks defense. The 2019–20 All-Star scored 32 points and dished out 10 assists, both game-leading tallies. He put the nail in New York’s coffin with a floater with 0.9 seconds to go before silencing the crowd that profanely heckled him early in the game.

New York dropped their big men back in pick-and-roll situations, which afforded Young the space to launch floaters and throw passes to teammates. The ‘Bockers guards and wings guarded him by committee, as no one could contain him. His speed off the dribble and ability to get defenders into awkward positions to draw fouls came in handy in the fourth quarter, where he scored 13 points—nine of which came from the charity stripe.

Tom Thibodeau’s task before Game 2 (Wednesday night at 7:30 p.m. ET) is to devise a way to slow him down. He kept Elfird Payton, who he said has good size and defensive abilities, in the starting lineup for him only to play eight minutes. Frank Ntilikina was given the opportunity to clamp up Young, but he didn’t even record a full minute of action. “Obviously, we have to do a better job,” Thibodeau said.

Meanwhile, Randle had a poor shooting performance. The All-Star only posted 15 points on 6-for-23 shooting. He said he expected the Hawks, whom he cooked repeatedly in the regular season, to show more urgency in guarding him. They did, and it worked. Randle posted a worse shooting percentage worse than tonight’s 26.1% three times during the regular season.

“I still liked the shots and opportunities I got,” Randle said. “Everything out there, I’ll be able to adjust to, and I’ll come back ready next game.” As the engine to New York’s offense, his ability to course correct is paramount for the Knicks’ chances.

Julius Randle on the Hawks' aggressive defense on him: "I knew they were gonna do that. I still liked the shots and opportunities I got…I just gotta figure out [how] to make it a little bit easier and adjust for next game." pic.twitter.com/3rNldSVUhe

“They loaded up on him pretty good, so we anticipated that,” Thibodeau said, explaining that finding the flow of the game is where Randle has to find opportunities. “The game will tell you the play. So, if they put two on him, hit the open man and it should be easy offense from there,” he said. Thibodeau also suggested that Randle may have even been too unselfish on some occasions. Randle agreed, saying there were “a couple of opportunities or looks that I had that I might have passed up.”

Despite Young’s stellar night and Randle’s constant misfiring, the Knicks had several chances to steal this game. They were in it the whole way and led by two points entering the fourth quarter thanks in large part to their bench.

Alec Burks shined brighter than Times Square in the fourth quarter, scoring 18 points on 5-for-8 from the field and 6-for-7 shooting from the free throw line. He recorded a team-high 27 points overall. Derrick Rose (17 points, five assists) and Immanuel Quickley (10 points) pitched in, too.

Even with a terribly off night from their star player and a woeful opening quarter in which the Knicks shot 26.9% from the field, they showed they’re made for the postseason. Although the Knicks’ terrific depth—which Burks said is the team’s strength—was on full display tonight, it was apparent that they missed Randle’s impact. As New York’s leading man all season long, the weight of responsibility is too great to be moved now. He knows it, and he doesn’t seem to be running from it at all.

“I’m not making no excuses,” Randle said regarding his performance tonight. “I gotta be better. And I will be better.”