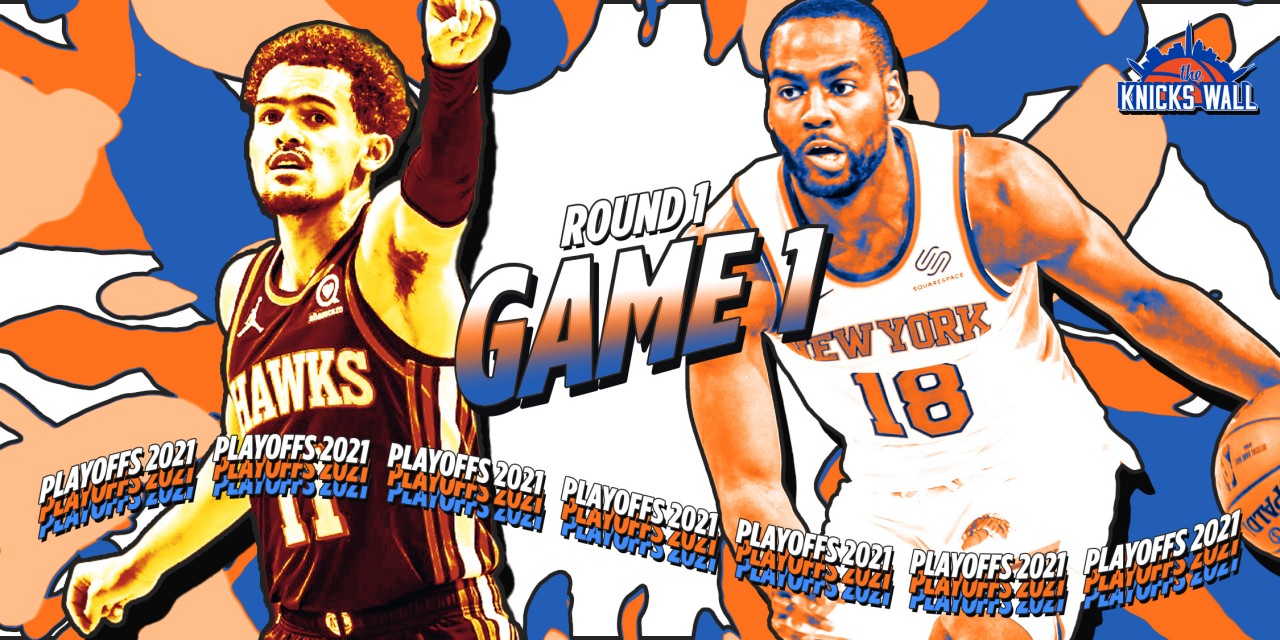 After dropping Game 1, the Knicks should swap Elfrid Payton out of the starting lineup against the Hawks among Game 2 counters.

The key takeaway from Game 1 between the New York Knicks and Atlanta Hawks is simple: both teams have some adjustments to make. With each team having plenty of time between the last game of the regular season and Sunday, the first quarter was a rock fight before a normal-paced NBA game broke out from the second quarter on.

There are adjustments and decisions on both sides, but for New York especially, the injury to Nerlens Noel could force their hand between now and Game 2. However, one harsh move Tom Thibodeau will have to consider is removing Elfrid Payton from the starting lineup and out of the rotation for good.

Before we can properly move forward, let’s go back to understand how we got here. Payton has been through constant criticism throughout the season. Once Immanuel Quickley emerged as a positive contributor, the prevailing thought was to give him Payton’s minutes. When the Knicks swung the Derrick Rose trade—a season-altering trade—many thought Payton would hold the starting role for a bit before Rose would usher him to the bench.

Payton went on to start every game he was available for. 63-for-63. Some nights, he played the normal minutes for a starter, trying to maintain his spot while drawing the ire of Knicks fans. However, as players would normally ramp up for the postseason, Payton’s minutes became minimized. In the team’s last 15 regular-season games, Payton played more than 20 minutes just one, setting the stage for Thibodeau to make a move.

However, as the Knicks and Hawks provided their starting lineups, Payton was listed at his normal point-guard position.

And despite the wrath of Knicks fans, it’s understandable. Again: 63-of-63 in the regular season. Payton assumed the role of Thibodeau’s Keith Bogans. A veteran deputy in the starting lineup. That sounds derogatory, but for Thibodeau, it’s more honorable. Bogans started all 82 games during Chicago’s 62-win season in 2011, often handling the start of the quarters before behind dropped off on the bench for the rest of the rotation.

However, the Knicks will have to make the change.

Payton finished with one assist, one turnover, and shot 0-of-3 from the field in just eight minutes on Sunday. The downward trend for his minutes continues; however, as each game matters and each possession becomes more and more important, those minutes need to be prioritized more.

The first play here feels simple enough. After a miss, Payton allows Trae Young to zoom down the court, get into the teeth of the defense, and finds Clint Capela for an easy finish above the rim. Young gets the ball up so fast that Nerlens Noel didn’t notice until the ball was in the air. In the second play below, Young gets past Payton with very little resistance, dekes Noel just enough for him to move back to the lob threat in Capela before throwing up an easy floater in the lane to break the scoreless tie.

If Elfrid Payton is going to play, he needs to do two things to remain on the floor. The first is to provide rim pressure. Constant pressure on the rim opens up the R.J. Barrett corner three, creates space for a floating Reggie Bullock beyond the baseline, and if he’s putting enough pressure on the rim, opens up the Noel alley-oop. The second is to defend Trae Young. If he can’t do either, and in this game, he struggled on both sides, how does he stay on the floor?

Payton knows that, with two of his three shot attempts being at the rim. However, he failed to convert either, and both times, the Hawks went down to score. In a game where his minutes are hanging by a thread, we have two missed shots at the rim and placed two poor defensive possessions, one in transition and one in isolation, on film.

Rose, the player who would presumably take over Payton’s spot in the starting lineup, finished with 17 points, five rebounds, five assists, and an uncharacteristic five turnovers. Even with the miscues, Rose did the one job Payton struggled in, i.e., attacking the basket at will and defending Young. While Payton served as a saloon door in the two clips above, Rose actually attempted to defend Young, moving him around and attempting to get the former Oklahoma Sooner out of rhythm.

Burks was the star of the game for New York, finishing with 27 points, including 18 points in the fourth quarter alone. Burks’ combination of shot-making and self-creation was apparent off the bench. Keeping Burks on the floor with the likes of Julius Randle or Derrick Rose will be interesting as an offensive safety valve, capable of bailing out New York on mucked-up offensive possessions.

The shocker was Quickley, who, in his first playoff game, looked extremely comfortable. The neophyte looked made for the moment, which is fantastic for New York winning the series. Quickley finished with 10 points, three assists, and two of the loudest three-pointers on the night. I want to show you this one here:

That’s some Stephen Curry, Jamal Murray, best-shooter-in-the-world type stuff. That man is 21 years old, the Knicks have him under his rookie contract for the next three years, and I’m sleeping well.

All three players offer more than Payton at this current juncture. Rose can slide into the starting lineup and offer another offensive playmaker who can do more. Thanks to Rose’s outside shooting, his drives mean more. His signature floater has been clutch all season, and he’s a good passer to the corners. While Payton has been a better defender in the past, Rose has been an active defender since getting to New York, enough to make the gap between the two insignificant.

As for Quickley and Burks, both work in that second unit. Both players can shoot and put pressure on the defense, even though neither player puts much pressure on the rim. That outside shooting is dangerous enough to force defenses to account for it, creating easier looks as they move inside the arc.

“The Opener” Elfrid Payton vs. “The Reliever” Frank Ntilikina

TKW’s Kyle Maggio said on The Knicks Wall Podcast (plug, plug, subscribe, and give us five stars) that Payton was the equivalent of an MLB opener for Thibodeau. Essentially, Thibs gives Payton his 40 pitches, or four minutes, and goes from there with his actual rotation. I love the analogy, but it’s time to move from an opener to just a normal rotation. However, that shouldn’t stop New York from using a reliever.

Frank Ntilikina made his playoff debut on Sunday, playing just 32 seconds, mainly for defensive possessions. He was cooked on the final defensive possession by Young, but the conversation quickly evolved from Ntilikina’s miscue to questioning Thibodeau for using him as a “pinch defender.” In a world where New York moves Payton out of the starting lineup, Ntilkina getting those minutes should not be out of the question. Not only was New York poor on that final possession, but they were also poor on night defending the various pick-and-rolls Atlanta threw at them.

– Trae lob to Capela
– Trae skip to Bogdanović open corner 3
– Trae behind the back to open De'Andre Hunter pop 3 pic.twitter.com/8zwghvzsUL

For all of Ntilikina’s offensive shortcomings, the defense has always been there. Essentially, allow Ntilkina to be your impact reliever, your Edwin Díaz, per se, and allow him to help and blow up plays on defense. The allure of Ntilkina is his ability to impact all defensive plays, thanks to his enormous wingspan. Not only could Ntilkina help pester Trae and stifle the pick-and-rolls, but throwing him on Bogdan Bogdanovic for possessions at a time wouldn’t hurt. Maybe throwing him on Lou Williams for his microwave stretches, or even Danilo Gallinari for a bit.

Frank Ntilikina doesn’t change New York’s fortune in the playoffs, but using him off the bench when the defense wanes hoping to get a stop or two doesn’t hurt and opens up the effectiveness of Rose in the first and second halves of the game.

I want to be clear: Elfrid Payton’s eight minutes did not cost the Knicks the game. Julius Randle finished 6-of-23 from the field, Reggie Bullock went 0-of-5 from the outside, the pick-and-roll defense was abhorrent and quiet as kept, Thibodeau’s rotation, and the use of 11 players, could come into question. There are others conversations we can have this week.

However, New York’s biggest move here is swapping out Payton in the starting lineup for Derrick Rose. Thibodeau has been adamant in keeping Payton in the starting lineup, defending him at any and every chance. However, as the Knicks fall to 0-1 in the series, a strategic change could be in play, and New York’s best option is to place their best rotation together and playing them for the most minutes the rest of the way.

And that best group, unfortunately, doesn’t include Payton.

»READ: How Tom Thibodeau has evolved his coach since arriving in New York