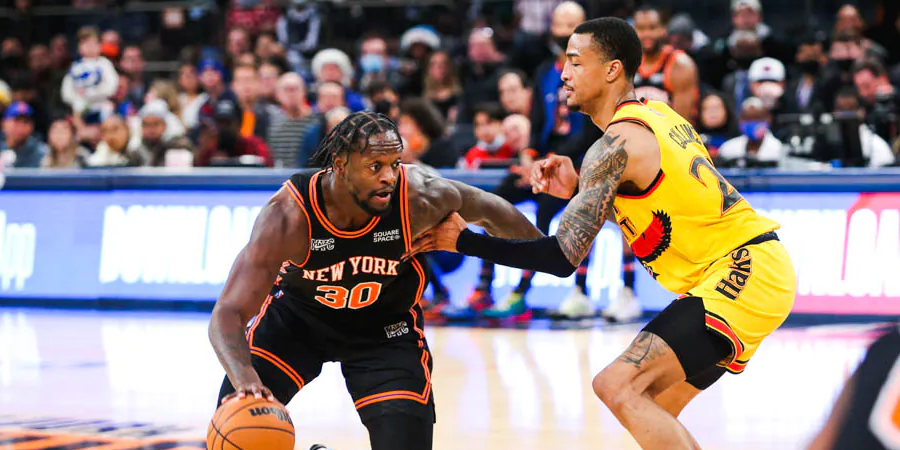 An already-familiar matchup between the Knicks and Hawks is further inflamed by the recent Cam Reddish trade as the two teams battle.

After making a deal with Atlanta on Thursday morning, the New York Knicks (21-21) will now face the Hawks (17-24) for a Saturday night showdown on the road.

It’s unlikely that both teams will get a chance to test out their newest acquisitions on Saturday, but it will be a fun matchup nonetheless since the Hawks aren’t as depleted as their previous meeting with the Knicks.

The Knicks have beaten the Hawks twice this season, including their last meeting on Christmas Day. New York cruised to a 101-87 win at Madison Square Garden against an Atlanta team that was missing Trae Young and a couple of other players.

Since then, New York was able to climb back to the .500 mark and enters Saturday’s game after back-to-back wins over San Antonio and Dallas.

Meanwhile, the Hawks have been struggling, dropping each of their last four games.

According to the NBA odds for the New York Knicks, they enter their Hawks matchup as underdogs. Winners of seven of their last 10 games, the Knicks, as visitors today, are 2.5-point underdogs in Atlanta on Saturday.

There’s no doubt where most of the attention will be focused on Saturday night. Noted Knicks Killer Trae Young is back in the lineup, and while he hasn’t been performing his best in recent games, he’s definitely not a player to be taken lightly.

Since racking up 56 points in a close loss to Portland on January 3rd, Young has regressed and his production has steadily declined in every game since. In Wednesday’s loss to Miami, he bottomed out at just 15 points on 4-of-15 shooting, with three boards, five assists, and four turnovers. Friday seemed to be a step back in the right direction though, netting 24 points on 7-of-13 shooting with nine assists in a rematch with the Heat.

It’s clear that Atlanta goes as far as its star point guard goes. While the Knicks will hope to keep the defensive pressure up to limit his effectiveness once again, it feels like a player of Young’s caliber can only go cold for so long before he eventually breaks loose.

Outside of Young, the Hawks rely on stretch big man John Collins. Collins is averaging 17.4 points and 8.0 rebounds and performed well against the Knicks the last time out, collecting 20 points and eight boards.

Clint Capela has been day-to-day with an ankle injury, Collins has had more responsibilities in the frontcourt alongside Onyeka Okongwu. The Knicks should look to capitalize inside, especially with a stalwart like Capela out.

Aside from those two, the Hawks will look to Bogdan Bogdanovic, De’Andre Hunter, Kevin Huerter, and Danilo Gallinari for secondary scoring. These three are streaky scorers and producers, so it’s tough to gauge how dangerous they can be with how up-and-down they are. They all virtually serve the same function: shoot three-pointers, provide energy and help out as best as possible on defense and in other areas of the game.

The Knicks’ win over Dallas left plenty to be happy about. Not only was a complete team win where the Knicks virtually led for the entire game, but it was a victory where the starters finally were in sync and shined as a unit.

For more than Knicks fans would have liked, there was plenty to lament about slow starts or the starting five underperforming just to have the bench bail them out. That was not the case against the Mavericks.

Every single member of New York’s starting lineup scored in double figures, with balanced contributions across the board, and all five players posted a plus/minus of +22 or better.

While it’s unrealistic to expect the Knicks to replicate that kind of team-wide performance every night, hopefully, Wednesday is a turning point or a moment where the Knicks’ starters start to find some consistency with one another moving forward.

Individually, most of the chatter about the Knicks has been centered on the way RJ Barrett has been playing since the New Year started, but especially his play over the last couple of games. He’s led the way in each of New York’s last two wins, and during that stretch, he became the youngest Knick to ever score 30 points in back-to-back games. Let’s see if he can ride the momentum into another impressive performance on the road on Saturday night.

Barrett hadn’t played his best against the Hawks in the other two meetings, only averaging 12.0 points, 5.0 boards, and 2.5 assists while shooting 38.5% overall and 28.6% from deep against the Hawks this season.

Maybe the third time will be the charm for Barrett and he continues to surge?

Kemba Walker is out with a sore left knee, per the team, and newcomers Cam Reddish and Solomon Hill won’t be suiting up either.